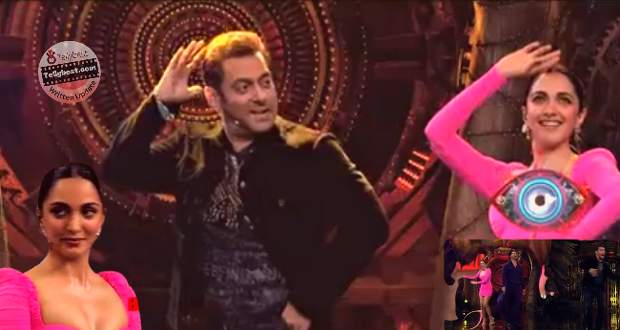 Salman talks about the house being divided into two.

Inside the house, Archana Gautam and Soundarya Sharma are talking about ending their friendships with Priyanka Chahar Choudhary due to her harsh words.

Meanwhile, Sumbul Touqeer Khan is helping Abdu Rozik and MC Stan steal chocolates from the captain's room while Tina Datta mocks her reminding that she is a captain herself.

New RJs in the BB House!

They both reveal that they are a fan of MC Stan's talking style and tell him to give his opinion on the housemates in his talking style.

Afterward, Kiara and Vicky tell the housemates certain questions and dedicate a song to the contestant whose name is taken as an answer.

Further, Kiara dedicates a special song to Abdu and both the guests enter the house as the housemates get surprised and happy to see them.

They reveal that they are there to promote their movie 'Govinda Naam Mera' and tells them that the eliminated contestant will be able to watch their movie once they exit the movie.

Afterward, the guests arrive on stage and greet Salman Khan while asking him to dedicate certain songs to celebrities of his choice.

The guests leave after which Salman greets the housemates and jokes that Vikkas Manaktala imitates Archana Gautam greatly.

Salman also jokes about Shalin Bhanot going into the tunnel and acting as if he's miserable.

Salman asks Sajid Khan what he would do if he was in place of Bigg Boss and gives the names of six contestants he would remove if he had the chance.

Rohit and Ranveer surprise the housemates!

Salman takes a break while Archana and Vikas again argue while demeaning each other's professions.

Afterward, Rohit Shetty and Ranveer Singh greet the housemates and tell them that they have a task for them.

Ranveer introduces the new Ching's Dragon Fire Chutney and tells them to tell who is the hottest and spicy contestant apart from themselves inside the house.

Most of the housemates take Archana and Priyanka's names saying that they are the spiciest housemates inside the house.

Shalin takes Tina's name while Rohit and Ranveer joke that she has had the most expensive entry which is 25 lakhs.

Rohit reveals that Archana is the winner and tells Vikas to give the winning speech in her place.

Afterward, Shalin is trying to instigate Tina while Shiv Thakare and Sreejita De flirt with each other.

© Copyright tellybest.com, 2022, 2023. All Rights Reserved. Unauthorized use and/or duplication of any material from tellybest.com without written permission is strictly prohibited.
Cached Saved on: Thursday 26th of January 2023 01:52:53 AMCached Disp on: Monday 6th of February 2023 04:32:08 AM