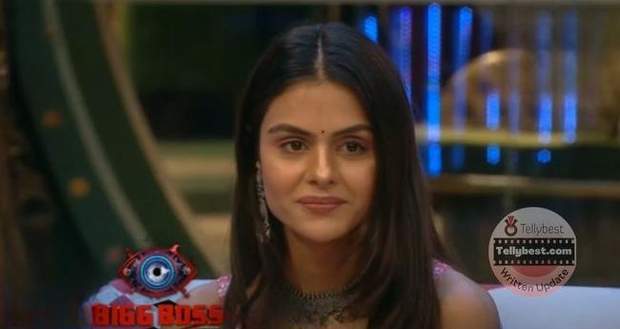 Today's Bigg Boss 16 16th January 2023 episode (day 108) starts with all the BB16 housemates waking up to the sirens and going to the garden area to sing the Bigg Boss anthem.

Archana Gautam plays with Maahim while Shalin Bhanot jokes with Priyanka Chahar Choudhary that he will feel the most lonely if Archana leaves.

Further, he starts laughing as he as does a fist up and signs that he would be glad if she leaves.

Just then, Mahim runs away from Archana making everyone laugh.

Shiv Thakare and Sumbul Touqeer Khan play with Maahim while asking her why she broke up with her husband.

They make fun of Shalin as they have a one-sided conversation with Maahim about how Shalin tries to flirt with Maahim but she has friend-zoned him like Tina Dutta.

Later, Bigg Boss announces to the housemates that they are the deserving Top 9 and tells them to come to the living area for a surprise.

The housemates get surprised to see a light-up word decoration of TTFW.

They try to figure out the meaning while Bigg Boss tells them that the Ticket To Finale Week is starting and the captain will get the first ticket to the finale.

Bigg Boss makes Nirmit read the rules of the BB House again and reminds her that his eyes will be following her the whole week.

Nimrit puts her name plaque in the TTFW giant trophy while she starts assigning the new duties to the housemates.

Shalin tells Priyanka that they should target Archana and should instigate her to start drama and she also agrees.

Tina and Priyanka in a catfight?

Tina starts crying and shouts to Priyanka that they all take her wrongly and Priyanka leaves telling Tina to get away.

Nimrit and Shiv get shocked at the crack in their friendship and laugh while Priyanka goes to Archana and tells her that she never became a captain.

Archana says that she does not want to create any drama and leaves the kitchen to sit with Soundarya Sharma who tells Archana that Priyanka is trying to instigate her.

Archana says that she knows and that is why she won't do anything as they expect her to.

Later, Priyanka sits with Shalin and talks to him about her argument with Tina while Shalin goes to Tina and tells her to come and eat.

Tina refuses and Shalin goes to Priyanka while she tells him to never talk in between her and Tina's arguments.

Sumbul nominates Tina and Shalin while Tina argues that Sumbul has been targeting her from the start.

Tina further blames Shalin for her getting nominated while Priyanka stands up for Shalin and starts fighting with Tina and Soundarya.

Tina nominates Soundarya and Sumbul while the housemates laugh at her unreasonable justifications.

MC Stan's turn comes and he nominates Soundarya and Archana.

Afterward, in Archana's turn, she nominates Shiv and MC Stan.

Priyanka and Tinna start joking while Shalin requests them to quiet down so that he can answer Bigg Boss.

Later, Sumbul is about to argue about the lights being on unnecessarily while Priyanka hypes her up saying that this is her involvement.

Further, Priyanka sees Soundarya in the restroom area and starts taunting her which turns into an argument.

Meanwhile, Archana argues with Shiv and refuses to clean the kitchen while Shiv does not give her any response.

Tina FIRES BACK at Shalin!

Later, Shalin goes to Tina and tries to justify that he got nominated because of her.

However, Tina drags Soundarya into the argument who states that Tina is not the main reason why she nominated Shalin.

On the other hand, Archana argues that MC Stan is not involved when Stan goes in front of the camera and states that he will get involved in something that he feels is important.

Further, Priyanka tells Tina to play with Shalin using his own tricks while Shalin comes there and tells her to not be two-faced.

At the same time, Stan continues to entertain his friends by shouting at the top of his lungs that he wants to win and will keep on saying it every time.

Archana sits with Nimrit and tells her that Priyanka is trying to be the mediator between Shalin and Tina which is going to cost her during the Weekend Ka Vaar.

Lastly, the Mandali sits in the tunnel and eats as they tell the rest of the housemates that they are preparing to send everyone home.

© Copyright tellybest.com, 2022, 2023. All Rights Reserved. Unauthorized use and/or duplication of any material from tellybest.com without written permission is strictly prohibited.
Cached Saved on: Wednesday 25th of January 2023 09:49:47 AMCached Disp on: Thursday 9th of February 2023 04:47:40 AM