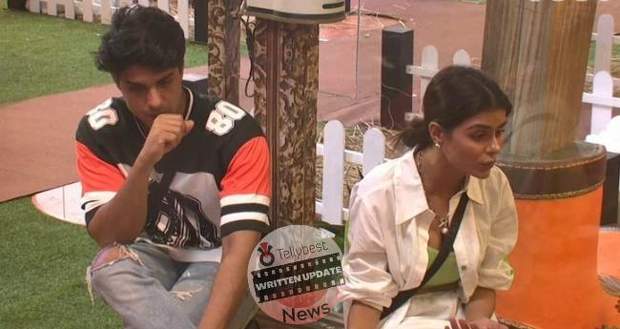 Today's Bigg Boss 16 16th November 2022 episode (day 47) starts with all the contestants waking up to the Bigg Boss Anthem as they try to remove the sleepiness from their eyes.

Further, Shalin Bhanot complains to Sajid Khan about his duties and tells him to figure something out.

Sajid thinks to make the task game fun and makes the housemates pull out chits to determine which duty they will be doing.

However, Bigg Boss scolds Sajid for using makeup items to do his chitchat game and makes his duty-changing invalid.

Further, Bigg Boss announces that since Sajid cannot be punished, Sumbul Touqueer will be punished as she gave her makeup items to Sajid and announces that she is not King's favorite anymore and tells her to shift to the room of six immediately.

Meanwhile, Archana Gautam starts taunting Sajid for not changing their duties immediately and keeps on pestering him.

Archana plays her game against Sajid

As a result, Sajid gives her three different tasks but she refuses to do that saying that she won't pick up the garbage as she has already taken a shower.

Archana misbehaves with Sajid and he angrily removes her from the kitchen and gives her bathroom and garden cleaning duty.

The other contestants all refuse to do their tasks arguing that they have all showered.

On the other end, the contestants start rebelling and Shiv Thakare throws Archana's stuff out of the room and into the mirror room.

Archana keeps laughing while she stays in the garden room and talks to Bigg Boss in a comic way.

Archana goes and keeps the clothes back in the trunk while the housemates argue that she can't use the property of Bigg Boss.

Sajid gives a container to Archana while others argue that she will not be allowed to use it.

Just then, Bigg Boss orders all the housemates to form a line in the garden and scolds them.

Bigg Boss scolds all the housemates who are smokers and tells them that they have been warned time and again to not smoke outside.

However, since the housemates are not listening to the heeds of warnings that are being given, the smoking room is restricted from now on.

Some people come and nail a wooden board in front of the smoking room while Bigg Boss tells them that they can smoke in front of national television from now on.

All the smoker housemates start to apologize to Bigg Boss.

Tina Datta tries to give advice to Shalin and they both start arguing.

Tina curses at him and walks off saying that she is never going to trust him again.

New Task for the ration!

Further, Bigg Boss gives another task to the housemates for the ration and tells them that the whole ration is in the Raja Ka Godam.

Each room will get a chance to steal from Godam at the end of the music and the remaining ration will be Sajid's in the end.

However, Sajid will have the buzzer and he can press the buzzer which will turn the lights on at the BB House.

The housemates will not be allowed to take anything from the Godam once the buzzer is pressed.

Sajid tells everyone that he will give 12 seconds to the room to take whatever they want.

When it is time for the room of six to collect the ration, Archana trips and falls while Sajid presses the buzzer.

All the housemates argue that Archana's bin cannot be collected as it is a violation of the rule.

Archana starts arguing with Archana and makes a big deal out of the situation while calling him biased and wrong.

Sajid gets angry while Nimrit Kaur Ahluwalia and Sumbul try to calm him.

Soundarya Sharma and Gautam Vig try to calm Archana while she keeps on calling her roommates incompetent for not bringing in flour.

Archana, Priyanka, and Soundarya start fighting among themselves while other housemates start trying to convince Sajid to give food items as a reward.

Later, Archana keeps on picking arguments with Sajid while Tina cries to MC Stan because of Shalin.

Shiv sits with Shalin and tells him to apologize to Tina while Tina keeps ignoring him.

Archana keeps on poking Sajid by asking him why he gave more time to Shiv and Abdu Rozik.

Sajid keeps on telling her to not poke him while Tina stands up for Sajid.

Later, Sajid gives food items to Abdu for free while Bigg Boss tells him to go to the medical room.

Sajid complains to the doctor about Archana and thanks him for the medicines.

Gautam tells Archana that she is on her own now as Priyanka's group does not want her as their friend anymore.

At night, Bigg Boss sends cake for Sumbul and Shalin while the housemates celebrate their birthdays together.

Shalin gives extra cake to Abdu while Abdu plans to prank him afterward that he has eaten the whole cake.

© Copyright tellybest.com, 2022, 2023. All Rights Reserved. Unauthorized use and/or duplication of any material from tellybest.com without written permission is strictly prohibited.
Cached Saved on: Monday 21st of November 2022 12:59:58 AMCached Disp on: Thursday 1st of December 2022 01:30:08 PM