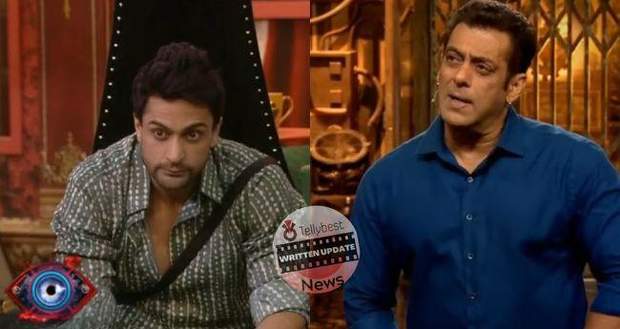 Afterward, Archana Gautam talks to Gautam Vig privately and asks him why he is becoming Soundarya Sharma’s “Gulamta” or servant of her.

Gautam says Soundarya is not his girlfriend while Archana just asks him to put him in the kitchen back himself & not listen to anyone.

Later, Gautam announces that the breakfast would be made by Soundarya along with Sumbul Touqeer’s help, lunch to be done by Archana & Priyanka Choudhary & utensils be washed by Shiv, Sajid, & Abdu.

Afterward, Abdu gives a nice massage to Shiv Thakare by walking over his back.

Nimrit Ahluwalia along with Soundarya & Gautam questions Sumbul over her comment stating she has more money than everyone’s net worth combined here.

Inside the house, Tina Dutta notices this and tells Shalin Sumbul is an attention-seeker.

After some while, Sumbul talks to Shalin alone and says if Tina & Shalin are not wrong in her eyes, then what is that thing that got presented wrongly to everyone watching BB16?

On the other hand, Gautam gets into an argument with Tina over her idle jacket as no one claimed it.

Sumbul Touqeer's actions do not match her speech

Meanwhile, Sumbul asks Gautam why everyone thinks that she has a crush on Shalin.

Gautam states that Sumbul only is showing this on the screen as her actions & speech do not match.

Further, Gautam also reveals that Shalin had told him to take Sumbul here & there since he feels claustrophobic with her for a long and fears she will go into depression.

Sumbul then tries to clear the air with Shalin while he makes excuses, saying he doesn’t know how to handle a girl who is half his age.

With tears in her eyes, Sumbul confesses she is feeling hurt after becoming a hot topic in the BB16 house.

She leaves angrily and Tina then asks Shalin to speak about what Sumbul said to him.

However, he just leaves the bedroom, saying he is feeling stuck.

Meanwhile, Shalin gets angry over Gautam for opening his mouth slowly & slowly while Nimrit tells Shalin he is over-aggressive.

Tina says no one bothered to talk to them once after Salman Khan’s scolding.

Sajid then asks Abdu to hear what is happening in the other room as Nimrit can be seen upset.

Tina feels Nimrit is a hypocrite since she did not take her side and Gautam joins them too.

Shalin says he has lost all faith in Gautam while Soundarya talks with Abu & Stan, stating Shalin did wrong with both her & Sumbul.

Abdu agrees and says Shalin is indeed FAKE, pushing everyone into his game.

Meanwhile, Nimrit tells Shalin he is like a switch and should be able to tell it openly that he IS arrogant.

At 9:30 PM, Abdu teases Gautam by taking Soundarya's name while Shalin asks Tina not to ever play him.

Outside the porch, Sajid asks Sumbul if she ever developed a crush on Shalin and states whatever her father said is true.

The next morning, Archana says Manya is not giving any content to the viewers but Sajid says she does a lot of work here.

She chuckles & says if BB needed someone to clean, they could have just called a maid and Manya hears all of this.

Manya gets some footage

Manya confronts an unbothered Silbatta Queen stating, she is not the one to decide and Tina asks Archana to look at her reflection before speaking boorishly about others.

Manya giggles and Tina scolds her then as she took a stand for her.

Archana states she won Miss Cosmo in Malaysia while Manya just won a beauty pageant in India as she repeats representing a lot of girls over and over again.

BB Bulletin with Shekhar Suman begins when he asks for a title to describe Abdu & Sajid's relationship.

Coming to Manya, Shekhar tells her that she is Miss India but India is missing her due to her lack of involvement in the house.

Shekhar then tells Archana that she is his most favourite contestant in the BB16 house.

Shiv and Nimrit are called into the newsroom where a viewer asks them why they are playing in the backfoot and not coming in front.

Further, Shiv replies that sometimes they have to play on the back foot and turns the conversation towards his friendship with Nimrit and hoping that it turns into something more.

Another contestant asks Nimrit why she is being a hypocrite by saying that she is not in a group and contradicting her sentence when she lost the music video task.

All the housemates clap as they all agree with the statement while Priyanka speaks up stating that Nimrit constantly used to push away Manya Singh when her group was discussing strategies.

Shekhar asks Sajid Khan for his opinion while Sajid reveals that the group is obvious since they are all very successful famous TV actors.

Shiv also speaks up about how Nimrit was biased while choosing Gautam as the new captain.

Trying to divert the conversation, Shekhar tells Shiv to give advice to the housemates as he has been the winner of the Bigg Boss Marathi once.

Elsewhere, Manya reveals to Nimrit that she likes Gautam but is hesitant to reveal it since he likes Soundarya, and how she doesn't want to seem jealous.

Later, Tina Datta reads from the file and informs about the My Glamm Face of the season task which will happen throughout the show and the winner will win 25 lakhs for makeup from the My Glamm website.

Tina's name pops up at the top and she starts thanking Bigg Boss and the audience.

Afterward, Gautam keeps getting complaints about the duties not being done properly, especially MC Stan not cleaning the bathroom.

MC Stan argues with Priyanka for saying that he didn't do his work while Gori Nagori acts sarcastic with Priyanka to support Stan.

Tina sits with MC Stan and bitches about Gautam while forming a plan with him to overthrow Gautam from the captaincy role.

Later, towards midnight, Gautam and Soundarya lie beside each other on the bed and talk about their day and how their relationship is going on making Soundarya shy.