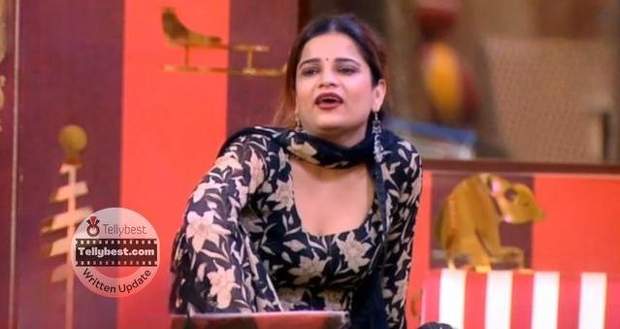 Today's Bigg Boss 16 17th January 2023 episode (day 109) starts with all the housemates waking up to the sirens as they go to the garden and start dancing while singing the BB Anthem to remove the sleep from their eyes.

Early in the morning, Shiv Thakare irritates Nimrit Kaur Ahluwalia while she tells him that she has to go and freshen up.

Nimrit hits Shiv with her slipper while he laughs and tells her to go and not show her ego.

Further, Archana goes to Nimrit and confides in her that she feels upset when Soundarya does not think about her when cooking or doing any other minimal thing.

Nimrit tells Archana that she should think about their friendship and should not let these small things get in between them.

On the other hand, Shiv and Sumbul Touqeer Khan play around while he jokingly hits her and she hits him back.

Meanwhile, Nimrit gets ready with Soundarya and tells her about her discussion with Archana.

However, Soundarya argues that she does not want to drag the friendship if Archana is making her look bad.

Bigg Boss does CHUGLI with Stan and Shiv

Later, Bigg Boss calls Shiv and MC Stan inside the confession room and asks them how they are feeling.

Bigg Boss jokes about Sumbul becoming attached to Shiv after Sajid left while warning Shiv to remember that Sumbul is his competitor too along with being his friend.

Shiv agrees while Bigg Boss further asks them who seems the happiest at Sajid's departure.

MC Stan gets excited as he tells Bigg Boss that he thinks Shalin Bhanot and Priyanka Chahar Choudhary are the happiest.

Tina tries to FIND A TOPIC?

Lastly, Bigg Boss tells them that this is a wake-up call from them before they leave.

Later, the Mandali is singing while Bigg Boss jokes that they are singing to put Sumbul to sleep.

Tina Datta comes there to check while Sumbul tells the Mandali that Tina is eager to target her.

Bigg Boss calls Shalin Bhanot inside the confession room and talks to him about Priyanka while Shalin starts gossiping about Priyanka's weaknesses and how she has a superiority complex which she is using while acting as Tina and his friend.

Bigg Boss tells Shalin that the ball is in his court now and allows him to leave the confession room.

Tina jokes with Shiv that he has become boring after losing oxygen.

She points toward Archana and tells him that she can give him oxygen.

However, Shiv says that he wants oxygen and not carbon dioxide.

Ration Task with a BIG TWIST!

Just then, Bigg Boss calls all the housemates into the garden area & the housemates get shocked to see the pantry with 'ration worth 10 lakhs' written on the banner.

Bigg Boss announces that they have also gotten a chance to get back the 10 lakh amount into their prize money.

Bigg Boss also announces that Captain Nimrit can take ration from anyone without having to participate.

Shalin loses most of the PRIZE MONEY!

Shalin goes inside in the first round and buys a coffee jar, flour packet, and chicken for 1,50,000 rupees.

Soundarya goes in the fourth round and gets shocked to see her vegan food priced at 1 lakh per item.

She takes milk for Archana while Bigg Boss tells her that the ration will be a personal ration and she cannot give it to anyone else.

Archana argues that Shiv was going to share his ration with the Mandali too and starts fighting with him while Shalin wins the fifth round and buys items worth 3,20,000 rupees.

Archana starts attacking Shiv personally while Shalin and others continue trying to convince Archana to shut up.

Nimrit states that she will take ration from Shalin's ration which upsets him.

Later, Nimrit puts all the ration in the captain's room and tells everyone that she wants to keep the ration safe and make sure that all the housemates are fed.

Priyanka sits with Shalin and tells him that she did not like the way he made fun of her while he argues that he is not the one who started it.

They both argue while Priyanka leaves there telling him that this is the end of their friendship.

Soundarya tries to explain to Archana why the word she used for Shiv 'Habshi' is offensive but Archana does not understand and argues with her.

In the end, Soundarya argues with her and ends her friendship while Archana leaves from there.

Later, Archana goes to Priyanka and complains about Soundarya while Soundarya goes to Nimrit and asks for her advice.

Nimrit tells Soundarya that Archana is using this tactic to shift her loyalty.

On the other hand, Sumbul cries seeing a portrait of her family while MC Stan comes there and starts dancing as he tells the camera that he loves him.

© Copyright tellybest.com, 2022, 2023. All Rights Reserved. Unauthorized use and/or duplication of any material from tellybest.com without written permission is strictly prohibited.
Cached Saved on: Wednesday 25th of January 2023 10:12:39 AMCached Disp on: Monday 6th of February 2023 05:31:08 AM