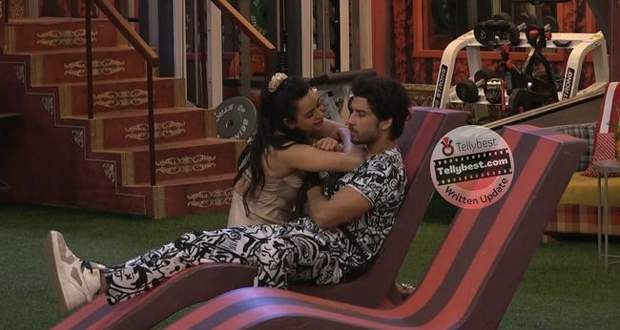 Today's Bigg Boss 16 17th November 2022 episode (day 48) starts with all the housemates waking up and singing the BB Anthem to start their day.

Meanwhile, Archanagoes back to sleep and refuses to do the work as an act of rebellion against Sajid Khan.

Shiv Thakare teases her by asking her if she needs coffee or anything else.

Further, Shiv goes to Sajid and gossips about it while Sajid bribes Tina Datta into working in exchange for some food items.

Sajid further tells the housemates that he can throw Archana out of the house and have her live in the outhouse as a punishment.

Nimrit Kaur Ahluwalia tells Sajid to do what he wants while Tina suggests he give her a deadline of twenty minutes.

Sajid tells Archana to do her duty in 20 minutes or else she will have to go to jail as her luggage gets taken to the jail globe on the garden balcony.

Later, Sajid, Gautam Vig, and Sumbul Touqueer are sitting together while they talk about Paris and other places.

Sumbul gives wrong details about the locations of places and laughs as she says that her geography is not good.

Bigg Boss calls a meeting and asks the non-favorite contestants if they want to take over Sajid's rule and tells them that they have a chance.

When nobody raises a hand, Bigg Boss mocks them and tells them that they do not want captaincy.

Bigg Boss tells them that they will be given a task where the non-favorites will be told at each round how to kill a favorite.

Meanwhile, Shalin Bhanot and Tina try to make a double deal with both teams.

Bigg Boss calls all the non-favorites into the activity room except for Priyanka Choudhary who has been put in jail by the favorites.

Tina and Soundarya Sharma start arguing while Bigg Boss informs them that they will have to choose one mask and will have to read aloud the way to kill the said favorite.

In the first round, Soundarya manages to pick the scroll first and is told to kill Nimrit by making her clothes dirty.

Shalin gets betrayed by Tina, Sumbul

However, Tina and Sumbul relay this information to Nimrit and save her as the round ends.

In the second round, Sumbul has to kill MC Stan by making him rap while Tina once again relays this information to him and makes the non-favorites lose.

The non-favorites get stressed as they have to win all the rounds from now to win the task.

In the third round, Soundarya has to remove Shiv's mic and make him give the warning two times to win the round.

Favorites win the task once again!

However, Sumbul reveals the task to Sajid and Shiv as soon as they leave the activity room making the non-favorites lose once again.

Bigg Boss announces that it is the end of the task as non-favorites failed to win any round.

Later, Priyanka and Gautam start blaming each other for losing the task while Shiv admits in front of his friends that he does not trust Shalin to be on their side.

Meanwhile, Archana cries saying that all her clothes and jewelry are ruined, and says that no designer will give her clothes now.

Gautam tries to comfort her while Soundarya tries to make her eat.

Nimrit sits with Shiv and tells him that she is on the same page with him about Shalin being untrustable but wants him to keep Tina separate from Shalin as Tina is trustable.

Tina and Sumbul win a task together!

Later, all the ladies of the task are entrusted with a Tressame task in which they are paired into three groups (Tina-Sumbul, Nimrit-Soundarya, Archana-Priyanka) and will have to give a ramp walk performance.

The winning pair will get a gift hamper.

All the remaining contestants declare Tina and Sumbul as the winner.

Later, Archana keeps asking all the contestants who threw her clothes out of the suitcase and into the jail globe.

However, no one responds to her and tells her that Salman Khan sir will tell her if it was wrong.

Towards the night, Tina is walking into the kitchen area when she suddenly gets a sprain.

Gautam and Shalin rush to help her while Tina tells Shalin to leave her hand.

However, Shalin does not leave her leg in an attempt to help her while Stan curses at him in concern for Tina and walks away.

Shalin and Stan get into an intense argument and the fight gets violent immediately.

Shiv comes in support of his friend Stan and fights with Shalin while all the other contestants start separating them.

Shalin keeps arguing with Sumbul, Ankit, Priyanka, and Sajid that Stan tried to get violent with him while Sumbul starts crying.

Shiv gets VIOLENT with Shalin!

Tina also argues in favor of Stan saying that he was just concerned for Tina.

Shalin argues with Bigg Boss saying that he wants action.

Sumbul shouts at him and tells Shalin that she will not let him go out of the room as she cares for him.

Just then, Tina comes into the room to talk to Shalin and explain the situation to him.

However, Sumbul tells Tina that she will not leave the room and that she can handle Shalin.

Being annoyed by Sumbul's possessiveness over Shalin, Tina tells them to handle the situation as she leaves.

Shalin tries to go after her while Sumbul argues with Shalin and stops him from leaving.

Shalin finally shouts at Sumbul that Tina also cares for him and leaves her in front of the room as he goes after Tina.

However, Tina keeps shouting at Sumbul to grow up and asks Shalin if he wants to argue with her.

© Copyright tellybest.com, 2022, 2023. All Rights Reserved. Unauthorized use and/or duplication of any material from tellybest.com without written permission is strictly prohibited.
Cached Saved on: Monday 21st of November 2022 12:48:45 AMCached Disp on: Wednesday 7th of December 2022 04:19:53 PM