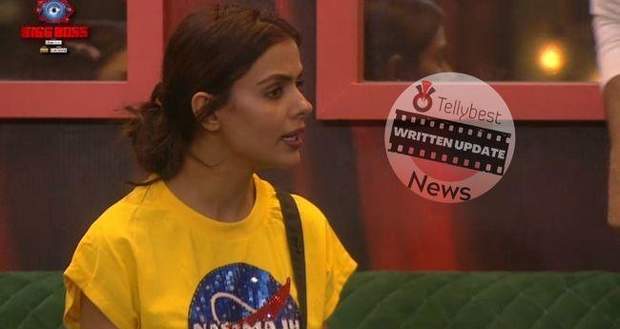 Today's Bigg Boss 16 17th October 2022 episode (day 17) starts with the housemates waking up and doing their duty of singing the Bigg Boss Anthem as usual.

Archana Gautam argues with housemates for keeping the glass door to the garden open due to the mosquitos.

Priyanka Choudhary tries to calm Archana while she sarcastically says that Nimrit Kaur Ahluwalia's blood is black which isn't liked by her.

Further, Shiv Thakare is doing Archana's head massage while Gautam Vig jokes that she shouldn't need that since she's the one who gives everyone headaches.

On the other hand, the ladies in the bathroom area are gossiping about which man is wearing cartoon-printed underwear.

Shiv comes there and accepts that they are his briefs and starts laughing along with the ladies.

Thieves in the Bigg Boss House

During lunch, Nimrit states that the rice packet from her room is missing and starts checking everyone's rooms.

In the end, the packet is found in Nimrit's room only and Shiv tries to joke with her saying that she accused them of stealing when she didn't check her own room properly.

Nimrit has an emotional breakdown

However, Nimrit starts getting emotional and cries saying that she has recently gotten off her anxiety medications and doesn't want anyone to push her.

Sajid Khan goes and advises Nimrit to apologize while she acts victim also.

Later, Tina is telling MC Stan to do anything so that he can hit the gong and get a chance to become the captain.

Talk of the Town: Shalin and Tina

Just then, Bigg Boss calls Tina and Shalin into the confession room to give them an opportunity to ask whatever they want to ask since they are the 'Talk of The Town' of the BB House.

Afterward, Bigg Boss fires Gautam from the captaincy and calls everyone into the living room.

Bigg Boss bashes Gautam for doing everything he wishes and using his name saying that Bigg Boss told him to do it.

Further, Bigg Boss tells the contestants to collectively decide and give two names for the captaincy.

Priyanka Choudhary and Shiv Thakare's names are selected and Bigg Boss tells them to make dominos from the blocks they have been given.

Priyanka Vs. Shiv for captaincy

The task starts and the contestants start helping their own favorite contestant by using different methods.

Nimrit starts throwing water on blocks to make them fall down while Ankit Gupta fights with Shalin and Tina to stop them from destroying Priyanka's blocks.

In the end, Bigg Boss scolds everyone saying that they cannot hide and do the dominos.

Priyanka does her dominos in the bathroom area and restricts everyone from entering it.

Gautam disqualifies her over it and tells Bigg Boss that Shiv is the winner.

Once the task ended and Shiv is announced the winner, Priyanka says that she does not mind him being the winner but is upset with Gautam for giving an unfair decision.

Archana also starts arguing with Gautam for making Shiv win which creates a huge argument among them in the garden.

On the other hand, Sumbul Touqueer gets angry at Shalin for taking Tina's name and not hers while he argues that he didn't remember that he promised to take her name in the past.

Meanwhile, Shiv is sitting with his group consisting of Gori Nagori, MC Stan, and Sajid Khan discussing what duties should be given to whom.

Tina tries to be the bigger person

Later, while having dinner, Ankit and Priyanka banter sweetly.

At night, Tina tries to get Gautam and Shalin to patch up but they refuse to do so and leave.

Shiv tells Gautam to do the dishes with MC Stan while Tina also argues that she won't do the duty twice due to Shiv's half-said commands.

Sajid calls Tina a Queen wannabe and makes fun of her along with Gori.

On the other hand, MC Stan is upset with Shiv for making him do a duty that isn't his to do.

Meanwhile, Sajid keeps trying to talk to MC Stan and asking him what is wrong seeing his upset mood.

© Copyright tellybest.com, 2022, 2023. All Rights Reserved. Unauthorized use and/or duplication of any material from tellybest.com without written permission is strictly prohibited.
Cached Saved on: Monday 21st of November 2022 10:22:17 AMCached Disp on: Friday 9th of December 2022 04:48:08 AM