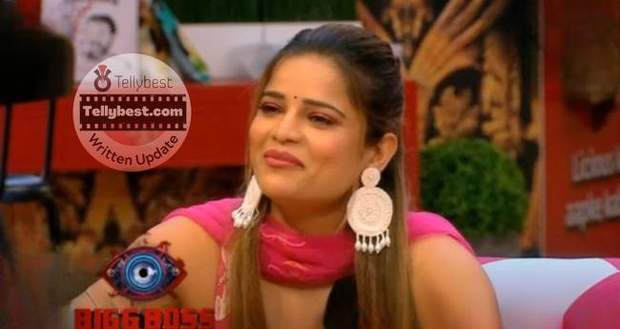 Today's Bigg Boss 16 18th December 2022 episode (day 79) starts with all the housemates waking up to the siren as they rush to the garden to complete their ritual of singing the BB Anthem.

Tina Datta sits with Priyanka Chahar Choudhary and tells her how Shalin Bhanot looked really dirty as he was throwing things at her.

Meanwhile, MC Stan sits with Sumbul Touqeer Khan and tells her how he finds Tina and Priyanka fake.

Later, Tina removes the writing from her mug while Shalin asks her if she really did it.

However, she ignores him and says that she will write it again later as the previous one was scribbled.

Soundarya Sharma tells Vikkas Manaktala to tell Shalin to clean the burner as he spilled milk there.

However, Vikas tells her that he will do it and makes them stop cooking so that he can clean it just then which Priyanka makes an issue out of.

Meanwhile, Sumbul sits with Stan and Sajid Khan and tells him that she feels like her coming to the show was a mistake.

Sajid gets angry at her and tells her to not cry as her reputation has become that of a crybaby inside the house.

Later, as the housemates are preparing lunch, songs start playing throughout the whole house and everyone rushes to dance excitedly and jumps around everywhere.

Archana Gautam makes the girls play lemon spoon while Bigg Boss tells them that he has a surprise for them at the dining table.

The housemates rush and get excited to see pizzas and other food items while Soundarya is upset that there is nothing vegan for her.

The contestants ask Bigg Boss the reason for the feast and Bigg Boss reveals that the show has been extended till 12th February 2023 due to the immense love from the fans.

Archana gets emotional because of BB!

Later, Shalin tries to talk to Tina while Bigg Boss tells Tina to wear her mic.

Meanwhile, Archana gets emotional in front of Soundarya as she reveals that she is upset even thinking about how the BB House will become empty after they leave and how Bigg Boss will miss all of them.

Further, Archana shows Soundarya how the bathroom area is still very dirty and tells her to talk to Shalin.

On the other hand, Ankit Gupta and Priyanka are having a cute moment as he pinches her cheeks and teases her.

Sreejita De calls Ankit hot while Sajid sits with Shiv, Nimrit, and Stan telling him how his life took a turn for the worse after he started directing Hey Baby.

Vikas praises Archana's cooking and tells her to keep aside some Kheer for him.

Later, Shekhar Suman arrives once again but in the whole astrology-themed setup.

Shekhar Suman says that the planets are living inside the Bigg Boss house but with different names.

Shekhar jokes that Archana has 'Roti Dosh' and says that she is just like a roti, hot and ready to burst.

Sreejita has a Bhindi dosh while Ankit is said to have Thandak Dosh.

Ankit again gives his one-liner which makes everyone laugh once again.

Afterward, Shekhar jokes that Shalin has 'An-Tina Dosh' due to which he cannot understand Tina and no one can understand them.

Priyanka has 'Bhopu Dosh' as Shekhar tells her to inform whom she is going to rain on in the coming days.

Sajid is said to have '4th gear Dosh' while Stan has 'Priyanka Dosh'.

Priyanka laughs hysterically while Shekhar gives Stan a rap to recite which will repel Priyanka.

'Popat Dosh' comes up next and Shekhar asks Shiv Thakare whose Dosh it is.

Shiv takes Ankit's name and tells him that he is the Popat Dosh in his life.

Shekhar asks the housemates what said contestants need to buy like a pure heart or a working brain.

Soundarya says that Shalin needs a reality check meter so that he knows when he is getting aggravated and aggressive.

Shalin refuses to accept it while Vikas says that Sreejita needs to get a recipe book.

Shekhar bids goodbye to the housemates while Tina tells Shalin that they crossed lines disrespecting each other.

Afterward, Tina scolds Sumbul for taking away and stealing the chocolates for the past few weeks.

However, Sumbul talks back telling her that she is not afraid of her, and leaves while Tina tells her to remember that she is invisible inside the house and should start wearing the black mask again.

Later, Archana Gautam refuses to make Rotis at night while everyone else starts arguing with her,saying that they need Rotis and won't do with rice.

They both argue while Archana starts praying that Priyanka's voice gets low just like hers so that she learns a lesson.

Further, Archana cries to Shiv who wipes away her tears and comforts her, surprisingly.

Archana tries to argue with Priyanka which fails as Archana starts releasing her pent-up anger on Soundarya.

Priyanka talks about Archana's friendship and ridicules her while Archana states that she does not want kitchen duty anymore and hides under the blankets.

Shiv, Nimrit, and others talk about how Archana and Soundarya's friendship is getting ruined because of Priyanka.

Nimrit, Sajid, and others drag Archana to the kitchen trying to patch up her and Soundarya's fight.

However, both girls keep crying while Archana goes and lies in her bed.

She gets sick while Tina and Shalin help her.

© Copyright tellybest.com, 2022, 2023. All Rights Reserved. Unauthorized use and/or duplication of any material from tellybest.com without written permission is strictly prohibited.
Cached Saved on: Wednesday 25th of January 2023 12:46:24 PMCached Disp on: Sunday 5th of February 2023 03:18:25 AM