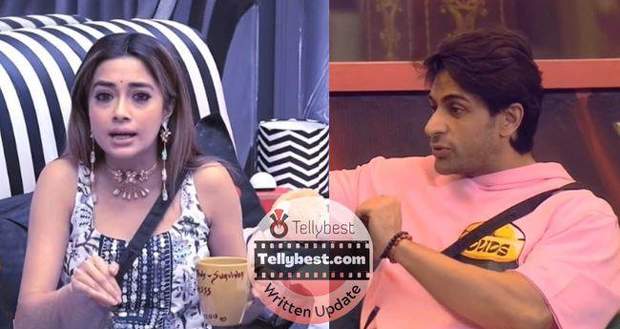 Today's Bigg Boss 16 18th January 2023 episode (day 110) starts with all the housemates waking up to the sound of sirens as they go to the garden and sing the BB Anthem.

Archana Gautam tells the housemates to stay happy while Shiv Thakare and Tina Datta tell her that they are happy already.

Meanwhile, MC Stan and Nimrit Kaur Ahluwalia talk about how they told Shiv that he does not need to explain himself to others as they know that he is very generous.

Soundarya Sharma tells Nimrit later that she always told Archana to better herself in the room but she cannot take her rudeness anymore.

At the same time, Archana complains about Soundarya to Tina and Priyanka Chahar Choudhary about how she has been thinking to herself.

Later, Tina plays around with Maahim while Nimrit tells Shiv that she does not understand why Tina behaves so differently in front of the camera and calls her fake.

Archana talks to Shalin about her not being real with Soundarya anymore as Soundarya tells her too much and does not consider her feelings in their friendship.

At the same time, Tina paints her nails as she says that she cannot even flirt with Bigg Boss these days as contestants rub it at her the wrong way.

Bigg Boss has a meeting in the living room and states that he made Nimrit the first captain on the day of the reset and gave her a ticket to the finale indirectly.

However, he knows that some of the housemates were upset with his decision and is giving them a chance to convey who they think is a better fit for captaincy and the first chance at winning the ticket to the finale.

Priyanka states that she thinks she is more deserving than Nimrit while targeting her personal game.

However, Nimrit also fights back by pointing fingers at Priyanka's own game.

Priyanka states that she thinks Shiv is also a deserving contestant.

Meanwhile, Archana takes her own name and Soundarya's name.

Shalin states that he thinks he is deserving of the title but also takes Nimrit's name as he states that he wants Nimrit to continue as the captain if he does not become one.

Tina takes her own name and continues arguing with Nimrit while she takes Priyanka and Shiv's name.

Shiv takes MC Stan and Priyanka's names while praising both of them for their personalities.

Priyanka argues that they have to take the name of a contestant other than Nimrit and Sumbul starts bickering with her while taking Shiv's name.

MC Stan takes Shiv's name while Soundarya takes her own name and Archana's name with the reasoning that they both are very raw.

In the end, the housemates decide that Shiv is selected by the majority while Priyanka refuses to agree as she says that she is only going to take her own name.

Archana mocks and tries to make the housemates laugh as she states that the purpose of the task was to give Nimrit's captaincy to someone else which is done.

In the end, Bigg Boss tells the housemates that Nimrit and Shiv will have a competition against each other for captaincy.

Priyanka and Tina start arguing with Shalin for planning against Nimrit and then talking in her favor during the task.

They argue while Tina and Shalin start calling each other two-faced.

Shalin states that Tina is so two-faced that one guy ends and the second guy is there at her feet for her to cling onto.

Priyanka and Tina start arguing with Shalin while Shalin calls both of them 'Ghatiya'.

Tina and Shalin continue throwing mud at each other's reputations as they fight over who is much ruder.

Priyanka takes Tina to the room and tells her to calm down while Shalin goes to Sumbul and tries to manipulate her into thinking that he did not talk wrong about her intentionally but that he just got instigated by Tina.

Sumbul tells him that she does not care and goes away from him.

Shalin continues to go to each person and talks badly about Tina while Tina and Priyanka continue badmouthing Shalin.

The Mandali jokes that Tina and Shalin are fighting for attention and are doing the drama since they both are eliminated.

Meanwhile, Shalin and Tina try to put the blame on each other as they state that the other was the one who initiated the relationship.

Afterward, Priyanka goes to Shalin and tells him to end the argument as it is becoming ugly while Shalin tells her that Tina called him an illegitimate son.

Priyanka goes to Tina and tells her to end the argument while Tina states that she wants to leave voluntarily.

Shalin sits with Soundarya and tells him that Tina, Priyanka, and Sreejita De used to talk bad about her.

However, Soundarya goes to clarify with Tina and Priyanka when the girls reveal to her that it was Shalin who told them about her.

Elsewhere, Shalin goes to Mandali and makes fun of Tina and Priyanka while Mandali laughs.

On other hand, Archana gets emotional and hides in the comforter and states that she tries to find love everywhere but cannot find it.

She cries as she takes that she tried to change herself too but it did not work.