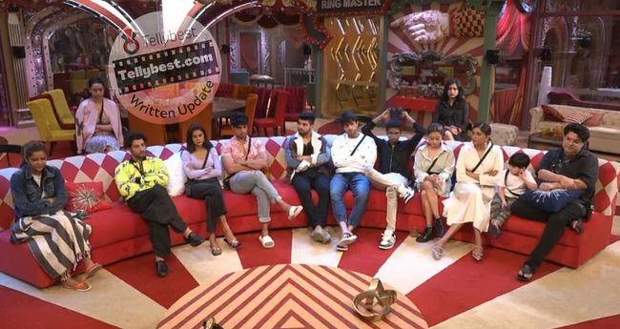 Sumbul Touqueer does not listen to Tina and keeps on shouting over her.

Sumbul gets possessive over Shalin!

Tina tells Sumbul to go outside but Sumbul does not agree and leaves which angers Tina.

She leaves from there saying that she will leave if Sumbul can handle everything.

Soundarya Sharma tries to calm Sumbul while she says that she wants to leave the show.

Tina and Sumbul get into a catfight!

On the other hand, Tina keeps on insulting Sumbul saying that she is sticking to Shalin like a leech and is possessive of him.

Gautam Vig and Tina talk about Sumbul's actions and call her crazy.

Meanwhile, Shalin tells the cameras he wants Bigg Boss to take action and says that MC Stan will leave or he will.

Ankit Gupta and Priyanka Choudhary also agree with Shalin and say that they will also talk on this matter during Weekend Ka Vaar.

Shalin keeps on venting in English while Bigg Boss tells him to speak in Hindi.

However, Shalin says that he can express his emotions in English better and tells Bigg Boss to see the footage and take an action in a threatening way.

Sajid Khan goes to hear both sides of the story from Shalin while Priyanka meddles in their discussion and starts arguing again.

Shiv Thakare and Nimrit Kaur Ahluwalia come to calm down Priyanka while she starts arguing with Shiv once again.

Soundarya and Gautam suport Sajid and talk against Priyanka and ANkit.

Priyanka keeps on shouting and making more chaos while insulting everyone who supports Sajid.

Further, Priyanka goes to Ankit and says that she is speaking for herself as a contestant while the remaining contestants go inside the house.

Priyanka keeps on talking about all the contestants angrily and is shouting ill about them.

Away from all this, Tina hugs a shaking Shalin and calms him down while again explaining to him that both he and Stan were wrong.

However, Shalin says that he does not want to discuss that and goes out of the room saying that he will bring water for her.

Nimrit comes to Tina and tells her that Stan is in a condition where he can cry any second.

Tina calms down the Shalin!

Tina tells Nimrit that she knows which is why she is trying to calm Shalin as he is making the drama more aggressive than it seems.

Priyanka and Tina get into an argument while Sumbul comes to sit beside Shalin and hugs him.

Tina tells Shalin that she wants to talk to him but Shalin says that he does not want to listen to anyone as he is only waiting for the decision of Bigg Boss.

Shalin removes Tina's hands from his body and tells Bigg Boss to give the whole description.

Bigg Boss reveals how the whole scenario went down and tells Tina to give her opinion on the whole drama.

Tina gives her point of view while Shalin keeps on poking her.

In the end, Bigg Boss scolds Shalin and asks Tina for her decision on who is at fault and if they deserve to stay or not.

Tina says that she considers both of them guilty but cannot punishment since no actual act of violence happened.

Shalin to pay 5.4 Crs Rupees for the voluntary exit?

Later, Tina and Stan leave while Shalin stays back in the confession room and demands Bigg Boss to either evict MC Stan and Shiv or let him leave voluntarily.

Bigg Boss tells him that he can leave and reminds him that he has to pay a 5.4 Cr penalty fee for a voluntary exit.

Shalin agrees to go for the voluntary exit and is about to reveal the news to Priyanka when Bigg Boss once again calls him into the confession room and tells him to not inform the contestants about his voluntary exit.

Further, when Shalin keeps on talking to Priyanka, Bigg Boss announces through the speakers that Shalin has decided to leave the show voluntarily.

Early into the morning, Shalin vents to Gautam and Sumbul that Tina played with him.

When Tina tries to talk to Shalin, he calls her a player and tells her that she is going to win the show.

Shalin manipulates Tina by saying that she played the game making Tina curious.

Tina keeps asking Shalin what he means and requests Sumbul to leave so that they can talk privately.

However, Sumbul says that she won't leave until her 'best friend' Shalin tells her to go.

In the morning, Tina stops Shalin and tries to convince him to stay but he says that she did not choose him.

Tina argues that she played by the rules while Shalin tells her that he knows MC Stan had intended to hurt him which is why he is making all the drama otherwise he would have let go of the topic a long time ago.

Tina tries to stop Shalin while he leaves from there while Tina says along with her thoughts in the laundry room.

© Copyright tellybest.com, 2022, 2023. All Rights Reserved. Unauthorized use and/or duplication of any material from tellybest.com without written permission is strictly prohibited.
Cached Saved on: Monday 21st of November 2022 12:43:09 AMCached Disp on: Thursday 1st of December 2022 12:32:20 PM