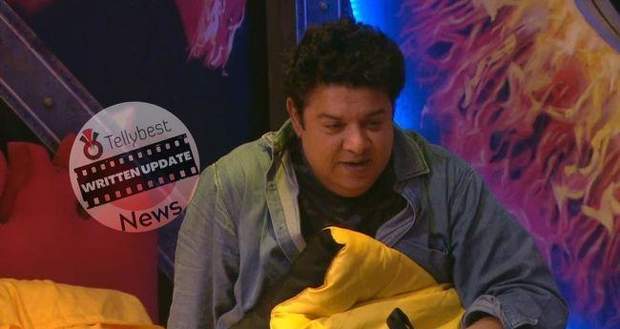 Shiv Thakare tells Priyanka Choudhary to do the dishes and also wash the coffee/tea mugs that are there.

However, Priyanka tells him that it is not her job but she will do it since the captain has told her.

On the other hand, Manya Singh argues with Archana Gautam for taking the Daal from her room while Archana argues that she should have not lied about not having any Daal.

They both start cursing at each other while Gautam Vig laughs at Silbatta Queen Archana’s creative insults.

Further, Manya is arguing with Shiv while Stan thinks that she is talking about him and gets even more upset and angry.

Gori Nagori and Abdu try to cheer up Stan while he says that he is not upset with them.

Afterward, Manya and Archana are taunting each other while Gori insults Archana and argues with her.

The argument gets intense as Archana throws water on Gori's face who also tries to hit the water in Archana's face.

However, Gori hurts Priyanka's hand in the process.

Shiv Thakare tries to calm down the situation but things become worse when Gori curses Archana.

Archana gets mad and states she can also shut her mouth up while Gori wets Archana's clothes kept in the bathroom.

Nimrit Ahluwalia cannot believe that people are fighting over an avocado while Shalin goes to inform Archana about Gori throwing water on her clothes.

Archana calls Gori a "geedad" while she is a "sherni" who never does things behind her back.

Later, Bigg Boss calls everyone in the living area and asks the contestants to take two names who don't show much involvement.

Manya Singh & Sumbul Touqeer's names get called out the most when BB16 asks them to wear a black mask until his next order.

Later, Tina Dutta calls Sumbul who is now wearing a mask & asks her why she is not showing any involvement.

Sumbul states she wants to go home, commenting "mujhe farak nahi padta" (I do not care).

Shalin Bhanot feels bad and asks Sumbul to live the moment while Tina asks him to let Sumbul play the game independently.

He leaves after Sumbul says she doesn't care if she is wasting time.

Later, Shalin consoles Archana who cries for taking her mother's 'kasam' over a stupid fight with Gori Nagori.

Afterward, Bigg Boss says that the most favourite contestants of the house will have to act like Shah Rukh Khan on a train and takes other contestants as passengers in their bedrooms.

Mc Stan, Sajid Khan, Abdu Roziq, and Gautam Vig are the chosen ones who try to figure out who to take with them.

As the task starts, Gautam surprises everyone when he takes Archana with him, making Soundarya feel left out.

Later, Priyanka, Tina, & Nimrit talk about how Shiv is influencing everyone and playing his own game.

Shiv advises Sajid not to take Priyanka & Ankit alone as they have to think about themselves too.

However, Sajid chooses Sumbul over Manya along with Abdu in the room of 6, telling Shiv, "Manya hamari nahi hai".

Stan and Shiv also instigate Shalin over Tina's words who told Mc that Shalin is a "paltu pyaaz".

Shalin promises to maintain the relation of brotherhood while Nimrit tells Abdu he gets influenced very easily by Sajid & Shiv.

The contestants who don't get chosen are Priyanka, Soundarya, Nimrit, Manya, & Tina who have to sleep together now in the room of 6.

© Copyright tellybest.com, 2022, 2023. All Rights Reserved. Unauthorized use and/or duplication of any material from tellybest.com without written permission is strictly prohibited.
Cached Saved on: Monday 21st of November 2022 02:03:09 AMCached Disp on: Monday 5th of December 2022 01:09:41 AM