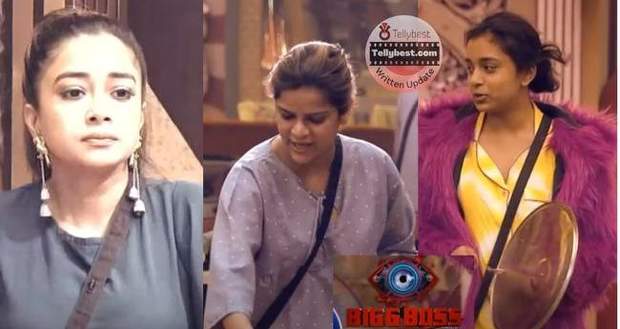 Today's Bigg Boss 16 19th December 2022 episode (day 80) starts with the BB16 contestants waking up to the siren while Tina Datta and Shalin Bhanot feel sleepy the most.

MC Stan and others keep on joking as they act on how Stan would run the house as a captain of the BB House.

Meanwhile, the wake-up alarm keeps going off while Sumbul Touqeer Khan makes a sound with the plates and spoon to wake up everyone.

Afterward. Bigg Boss scolds Ankit Gupta for being a lazy body and tells him to not rest with the excuse that he is sick like Shiv, Nimrit, and others.

The new Captains of the house!

Further, Bigg Boss tells Priyanka Chahar Choudhary and Ankit Gupta to get out of their comforters and come to the living room.

Vikas gets FIRED before his captaincy!

Vikas and Soundarya will be the boss of the BB office while the rest of the contestants will be office employees.

However, the employees will be bitching and complaining about other contestants to make sure that they are fired (removed from the task).

In the first round, Soundarya and Vikas remove Ankit and Soundarya from the task.

However, in the second round, the two captains keep on arguing and cannot come to a conclusion that angers Bigg Boss.

Bigg Boss gives the ball to the contestants and tells them to decide whom to fire from Soundarya and Vikas.

The housemates argue and as a result of the majority, Vikas is fired from the task.

Further, Soundarya fires Priyanka and Tina from the task.

Shalin Bhanot flirts with Soundarya in the third round while Shiv also tries to butter Soundarya to make Stan the winner.

Soundarya laughs as she fires Shalin and Archana.

In the fourth round, Nimrit and Shiv get eliminated from the task.

In the last round, Soundarya can fire only one contestant and she fires Sajid making Sreejita and Stan the new captains along with Soundarya.

At the same time, Archana Gautam and Tina Datta fight in the kitchen while Archana says that she would have given her a slap if they were out of the house.

Later, Sajid argues with Soundarya and tells her that she had a choice to make him the captain but she did not take his name.

At the same time, Sajid and others argue with Nimrit for taking MC Stan's name while she argues that she did not know Vikas would twist the story and spread it in the house.

Priyanka fights with Archana again regarding the kitchen and mocks her saying that she ate her food.

Later, Sajid, Shiv, and Stan are discussing Nimrit while Nimrit sits with Sumbul and tells her that she is not even allowed to have her own opinions.

In the evening, Stan and the other captains are distributing duties while Priyanka again tries to create a commotion by saying that she cannot cook on her own.

Afterward, Sreejita and Shiv hug to make Tina jealous when she sees them and gets angry.

Priyanka and Ankit are talking in the garden while the housemate's joke that they are waiting for Dulha (Ankit) to get out of the house to see Priyanka's true game.

Archana and Soundarya are talking when Vikas comes there and tells her to make sure that Archana completes her task.

Priyanka is making dinner while Nimrit mocks her and tries to instigate her.

Tina and Sumbul get into an intense argument while Sajid keeps on making Sumbul feel like she is a child and that she cannot do anything.

Shiv and Nimrit try to make Sumbul not feel upset as they say that Sajid is just joking.

However, Sajid says that he is showing Sumbul a mirror so that she knows she is not anything.

Sumbul finally speaks up to Sajid for the first time as she tells him to not make her feel bad and let her handle Tina as she wants to.

Further, at night, Archana tells Sajid that she will see him if he supports that Dulha (Ankit).

Sajid asks her what she will not do as Ankit is his friend and he might support him.

Meanwhile, Priyanka talks badly about Archana and Soundarya by saying that they have changed sides by sitting in the captain's room.

© Copyright tellybest.com, 2022, 2023. All Rights Reserved. Unauthorized use and/or duplication of any material from tellybest.com without written permission is strictly prohibited.
Cached Saved on: Wednesday 25th of January 2023 12:23:34 PMCached Disp on: Wednesday 1st of February 2023 06:06:12 PM