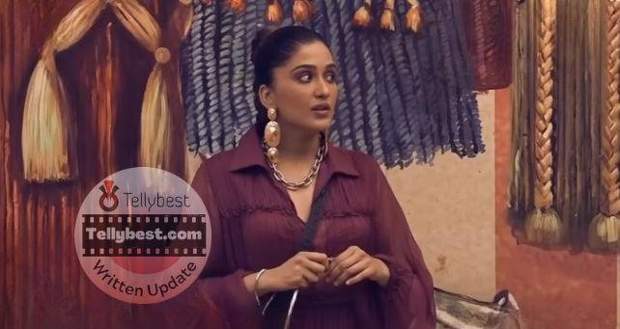 Today's Bigg Boss 16 19th January 2023 episode (day 111) starts with Bigg Boss calling the housemates to the garden area as he states that it is time for the captaincy task.

Bigg Boss states that the ball will be in the hands of the remaining housemates as they will be the participants of the task while Shiv Thakare and Nimrit Kaur Ahluwalia will be the coordinators of the task.

The housemates will have to catch the bullets from the slide and put them in the cutout of the person they do not want to become the captain.

In the first round, Priyanka Chahar Choudhary gets the bullet first and puts it in Nimrit's cutout.

In the next three rounds, Shalin Bhanot and Soundarya Sharma catch the bullet first and put it in Shiv's cutout making Nimrit win the task.

Shiv argues with Soundarya and drags Tina Datta into it while Bigg Boss jokes that he has been left speechless due to Soundarya's use of Hindi words.

Further, Soundarya continues arguing with Shiv and tells him that he cannot drag someone's reputation while talking about them.

Shiv reasons that it was she who questioned his reputation in the last nomination task.

Tina enters the argument while Nimrit tries to explain to Shiv to not bring Gautam Vig into the argument.

Later, Archana talks to Nimrit and tells her that they should explain to Shiv that he should not talk about Gautam as Soundarya has moved on.

Archana also goes to Priyanka and rebukes her for supporting the Mandali while Priyanka states that she supported Shiv since she thinks he is deserving.

Soundarya cries to Shalin saying that Shiv is trying to character-assassinate her and that it is a very big thing to admit that she realized she got played by Gautam after he left only.

Shalin tells her to not give importance to Shiv while inside the captain's room, Shiv tells his Mandali that Soundarya is thinking to get ahead in the game by dragging others.

Soundarya comes to the captain's room afterward and tells Shiv to not talk about certain things as it is very hurtful to her and leaves while Shiv makes a joke out of it to MC Stan.

On the other hand, Tina sits with Priyanka and tells her that she cannot respect Shalin knowing his tactics, and tells Bigg Boss to call her into the confession room since she did not come here to get herself humiliated.

Soundarya sits with Nimrit and tells her to be on the lookout since she saw the look on Shiv's face and knows that he was not pleased with her being the captain.

At the same time, MC Stan and Shiv try to brainwash Shalin into siding with them and tell him what he did wrong but Shalin just agrees to his mistakes and leaves.

Later, Shalin and Soundarya both tell Nimrit to open her eyes and see who is with her in reality and take advice from what her father and Salman Khan told her.

Nimrit tries to look for Shiv but sees him sitting with Priyanka and Tina and feels hurt.

Soundarya tells her to not get affected as Shiv is doing it intentionally.

At night, Nimrit sits with the Mandali and expresses her irritation about Shiv sitting with Tina and Priyanka while Shiv apologizes to her and reveals to her that he was just doing it to make her jealous since he doesn't like her sitting with Shalin too.

Shiv further jokes with Sumbul and apologizes to her too for hitting her too hard when he was joking with her.

Shiv is jealous of Shalin Bhanot!

In the other room, Tina tells Priyanka that now Sumbul will be targeted in the Mandali by the members since she is the weaker link.

The next morning, all the housemates wake up and go to the garden to sing the BB Anthem.

Afterward, Shiv reveals to Stan that he feels hurt too when Nimrit jokes around with Shalin while Sumbul comes and sits with them.

Tina tells Priyanka that she knows she is going to get blamed in the weekend ka vaar.

Nimrit jokes about Priyanka to Shalin and Soundarya while Shiv tells Stan and Sumbul to see what is happening.

Later, the Mandali laughs at Sumbul experimenting on Shiv's hair while Shalin comes there and offers help.

Priyanka sits with Tina and whistles at Shiv and Stan while they ignore her and go to sit with Nimrit.

They joke about Stan and pull his leg while Stan accidentally calls Priyanka cute.

At night, the housemates are given a task where they are divided into two teams and have to answer certain questions to win the task and a gift hamper from country delight.

Team A including Tina, Sumbul, Stan, and Shiv wins the task while the rest of the housemates lose.

In the end, Shiv and Mandali joke about how the other housemates were trying to laugh too hard at their failure.

What is Tina Datta planning?!

Archana goes into the store room while Tina tells Bigg to lock the door.

They run away with the things while Archana runs after them.

Later, Tina reveals to Priyanka that Shalin had tried to form a team with her from outside the BB House and had also planned to be friends with Gautam.

Tina tells Priyanka that she had refused to talk to Shalin before entering the BB House.

Into the night, Tina and Priyanka gossip about Shalin, and Tina tells her that Shalin had asked her for something so cheap from her that she cannot even describe it in front of cameras.

Priyanka tries to convince Tina to tell her but Tina refuses and gives her a hint by telling her to think about the times when Bigg Boss reprimanded Shalin for the bathroom incident.