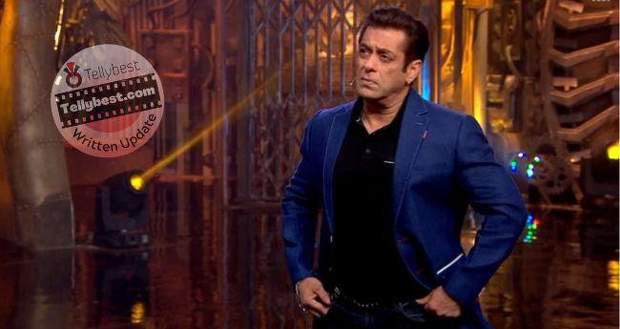 Meanwhile, Sumbul Touqeer Khan gets close to Shalin as they both discuss what transpired.

She cries as he comforts her.

On the other hand, Archana Gautam & Sajid Khan get into an argument over brushing & mopping on the floor. Archana comments that how will Sajid know that brushing the floor can happen anytime in the house.

Sajid gets angry at her and announces he wants to leave since she came at his family & doesn't know the struggles of living in a slum-like he did.

He says in front of the cameras that he wants to leave the house as Archana can drive anyone mad.

Meanwhile, Soundarya Sharma compliments Shalin on his role as Dr. Avinash and he gets pleasantly surprised.

Later, Tina Datta enters the bathroom where Soundarya & Shalin are having a conversation.

Shalin tries to provoke Tina saying he can pay five times the amount of everything she has brought in the Bigg Boss House.

Soundarya asks Tina & Shalin to talk it out while Tina feels hurt over his comments.

Tina stares at Shalin in disbelief Shalin doesn't stop bashing Tina and says she has used him.

Tina asks how come she can use him within twenty days.

Sumbul then tries to talk to Tina saying she has no hand in making Shalin not talk to Tina. However, Tina firmly tells Sumbul that it is because of her that she is not able to talk to Shalin.

"He loves me, Sumbul" Tina Announces.

Sumbul says that her relationship with Shalin is just a friendly one while Tina states she has come in between her love with Shalin.

Tina thus challenges Sumbul to leave the house along with Shalin who later goes to him to bitch about Tina.

Priyanka Chahar listens to Sumbul ramble while Tina word vomits to Nimrit, saying Sumbul who was once so uncomfortable to share a bed slept with him in the same bed last night.

Shiv Thakare & Sajid try to console Tina who feels Sumbul is just making Shalin aggressive and he is bound to take wrong decisions in the heat of the moment.

Salman Khan returns on stage & greets the contestants in a very deadpan tone.

He asks them to guess what topic he is going to talk about today & Shalin answers about his fight with MC Stan.

Salman then asks who were the people who made this topic their own when Tina was the center of it.

Salman questions Sajid whether he agrees that Sumbul is way too obsessed with him or not. Sajid says that Shalin is almost like a crush to him.

Nimrit agrees while Tina tells Salman she has been trying to vocalize this from the very beginning.

Salman Khan's anger showers on Shalin as she asks him who is to babysit Sumbul over & over again.

Tina feels satisfied that someone is finally talking sense while Salman states Shalin is old enough to know how life works.

Shalin's defense is that Sumbul has no friends in the house, which is why he feels protective over her.

However, Nimrit states that Sumbul is also comfortable with Sajid & Ankit Gupta, so she can also talk to them.

Sumbul is asked to join Priyanka & Ankit on the sofa aside while Salman deals with Shalin.

Shalin justifies herself that he is no Cassanova while Salman reprimands him not to use English, & if he wants to, he can go to Bigg Brother.

Salman gets tired of Shalin & calls him a smug person who is not even able to understand what he speaks.

Nonchalantly, Salman asks her who is stopping her, and since she has signed a contract she is free to leave.

Archana butts in and says one day Shalin was saying that Sumbul will be 30 and he will be 50 while Shalin gets angry at her for putting oil into the fire.

Shalin gets tired and asks Salman why he is being blamed.

Salman Khan gets tired of him & asks him whether he knows what he is speaking.

Shalin feels he is being unnecessarily targeted and says Stan was the one who started the violence.

Salman says he did not even arrive at Stan and it is true that Stan was the one who started the string of curses.

Nimrit adds that Shalin has put all the blame on Tina for "killing his dreams". Shalin almost cries and Salman clears that he has no personal problems with him.

Shalin gets stupefied when Salman berates him, stating he must not speak about doctors, or law when he cannot even figure out that a nineteen-year-old is obsessed with him!

Tina gets a clear chit when Salman tells her that she is not wrong, rather she HAS BEEN WRONGED.

Mc Stan gets a scolding from Salman saying the person who talks about his mother a lot, in his clip using curse words should be sent to her.

Salman leaves the contestants as later everyone discusses Sumbul's obsession with Shalin.

Sajid says Sumbul has a boyfriend outside and this is a teenage crush but Nimrit states it is not a crush, she gets angry when she is asked to leave.

Meanwhile, Tina is seen consoling Shalin who says he is looking like a boneless chicken.

Tina reminds him that he is here to win as both the rumored lovers hug each other out.

Salman instructs everyone to go to Tina & Shalin the pair laughs out loud as they can hear him too.

In the end, Stan is asked to apologize to Shalin as a brother & Shalin states he won't leave the house.

Sumbul is reminded again that it is because of her that her friendship with Shalin is looking wrong.

They come up with an exciting task for the BB16 contestants & ask them to choose one contestant amongst two who should be labeled as the Star of the Bigg Boss house while the other contestant's image on a tile gets broken.

Ayushmann jokes that he & Shalin were in Roadies together & he has matured a lot.

Meanwhile, Jaideep tells Ankit that their personality is the same since they speak very less.

Salman takes it personally and asks Ayushmann if he is serious.

Tina urges Shalin to do the same & he breaks Priyanka's tile as well.

After the task, Salmin bids adieu to the cast of the Anek movie & asks Priyanka why she thinks that Bigg Boss is liable to answer her.

© Copyright tellybest.com, 2022, 2023. All Rights Reserved. Unauthorized use and/or duplication of any material from tellybest.com without written permission is strictly prohibited.
Cached Saved on: Monday 21st of November 2022 11:25:57 PMCached Disp on: Friday 9th of December 2022 05:21:00 AM