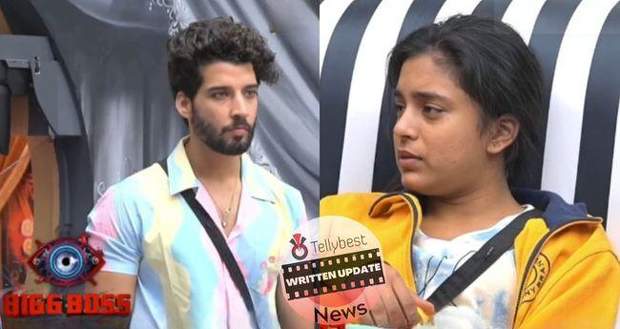 Priyanka starts getting angry with Shiv and tells him to shut up.

Afterward, Priyanka takes Ankit to a corner and tells him that she knows she is attached to him and that it is a mistake on her part.

Ankit tries to tell her that he is also attached to her but she tells him to not bring up the things from the past and make her feel even more possessive of him.

On the other hand, Tina Dutta and Nimrit Kaur Ahluwalia are talking about the complicated relationship between Gautam Vig and Soundarya Sharma.

Afterward, Bigg Boss tells Sumbul Touqueer and Manya Singh to remove the masks and reveals that the nominated contestants for this week are Manya, Sumbul, and Shalin Bhanot.

Later, Shiv and Gori are trying to influence Abdu Rozik against Sajid Khan but the sweet Abdu keeps supporting his Bhaijaan Sajid Bro.

On the other hand, Tina asks MC Stan what kind of a person he is for choosing Shalin over her.

However, Stan goes to Shalin and tells him whatever Tina has told him along with Sumbul who tries to give support to him.

Sumbul tells Stan that she noticed these things but didn't tell Shalin as he was not ready to listen.

Stan tells Shalin to wake up and realize how bad Tina is while Sumbul tells him to think from day one about Tina's behavior towards him.

At the same time, Tina and Soundarya are talking about Stan and how he betrayed them by convincing them that he will choose them and then picking Shalin.

Away from all the drama, Abdu says goodbye to the viewers through the camera and states that he misses his father.

The next day starts with all the contestants waking up to the sirens and singing the BB Anthem.

Further, Abdu goes to Nimrit and Tina and hugs them saying that he misses them.

Abdu goes back to his team consisting of Gori, Shiv, and Sajid who all make fun of him being in love with Nimrit.

In the kitchen, Tina and others talk about how Abdu is being mocked and used by his team.

Later, Sumbul & Gautam are joking when he tells her 'come to daddy' and hugs her while everyone else laughs.

Sumbul shyly smiles while the others laugh at the double meaning of the statement.

Afterward, Sumbul retells the incident to Shalin who starts an argument with him for targeting a small child.

However, Gautam says that Sumbul is not a child and can fight for herself if she feels bad which escalates the fight.

The house gets divided into two with Sumbul trying to calm Shalin while Tina and Gautam keep arguing with them.

Tina says that Sumbul and others are not deserving of their friendship.

Shiv picks up Shalin like a baby and brings him to the other room while the housemates start arguing.

Once the argument settles down, Sajid tells Sumbul that she should have not told Shalin about the incident if she didn't want him to fight for her.

She argues that she doesn't want her father to think that she cannot fight for herself.

Afterward, Sumbul goes to Gautam and Tina and tells them to not joke with her that way while they tell her that she should have told them herself and not sent her spokesperson Shalin for them.

Later, Bigg Boss asks all the contestants if they have enough ration and tells all of them 'Aap Qatar Mein Hain (you are in line)'.

Afterward, Bigg Boss tells the contestants that they are being given a chance to earn a ration for their room and tells them the rules and regulations of the task 'Aap Qatar Mein Hain'.

Only the first three contestants in line will get a ration (15 items for 1st person, 10 and 5 for 2nd and 3rd respectively).

However, the twist is that Gautam can close the shop at any time and will get all the remaining stuff in the shop at the end.

The first contestants are Shalin, Soundarya, and Gautam while Sajid and Abdu start hiding things under the counter such as coffee, chips, milk, chicken, flour, and other things.

Mc Stan breaks down in front of the cameras

On the other hand, Stan breaks down and tells Bigg Boss that he wants to leave while others try to comfort him.

For the second round, Shalin again comes first and gets only 12 items when Shiv rings the bell signaling the closing of the shop.

However, on the third round, Ankit, Sumbul, and Gautam get flung around while Shiv states that Ankit came in first which angers Sumbul.

Shalin helps Ankit while Tina comes to confront him but Shalin says that he does not want to talk to her lies and they start accusing each other of playing with each other.

Shalin tells Tina that it was all Stan's plan while she says that they both got played by him.

© Copyright tellybest.com, 2022, 2023. All Rights Reserved. Unauthorized use and/or duplication of any material from tellybest.com without written permission is strictly prohibited.
Cached Saved on: Monday 21st of November 2022 04:38:35 AMCached Disp on: Wednesday 7th of December 2022 11:43:42 AM