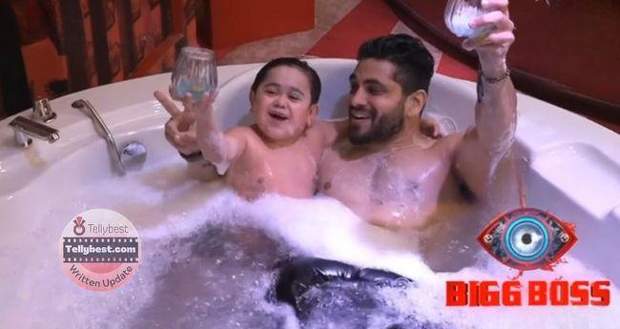 Today's Bigg Boss 16 1st January 2023 episode (day 93) starts with all the housemates waking up to the sirens as they rush to the garden and sing the BB Anthem.

Abdu and Shiv Enjoy In Jacuzzi!

Tina and Abdu sit in Maahim's house and talk about it while Maahim plays with Shalin.

Abdu asks Tina if she likes it when Shalin makes fun of her and degrades her and explains to her that it is not how friends behave with each other.

Afterward, Shiv Thakare, MC Stan, and Abdu Rozik shower together in the hot tub of the captain's room to kick off their new year with adventure.

Bigg Boss also plays songs while the rest of the housemates rush to play with them with the soap bubbles.

Abdu and Priyanka bond over jokes!

Later, Abdu is sitting with Priyanka Chahar Choudhary and they joke about Archana Gautam and others while Archana and others comment that Priyanka is using Abdu to get views.

When Abdu sits with Sajid Khan and MC Stan, he tells Sajid to not make fun of him and treat him as a child.

Shekhar Suman returns with a RAP!

Shekhar also jokes about the house members arguing with him in the kitchen after watching Archana in Bigg Boss house.

Shekhar jokes about the housemate's unique advantages and disadvantages with special recipes.

Afterward, Bigg Boss calls all the housemates into the living room, asking them how they wanna celebrate their New Year 2023!

Shalin jokes that he wants alcohol while Bigg Boss tells them to remember that they are in the show only.

Tina Datta says that she wants to meet her family and friends while MC Stan states that he misses doing his show.

Bigg Boss tells MC Stan that his fans will get to hear him live once again inside the Bigg Boss house only with some of the collaborated artists.

Stan gets excited while Bigg Boss calls him into the confession room to give him the details.

Stan realizes that his long-time friend Ikka is going to perform with him and gets happy as he says that he loves it when small artists get support.

Meanwhile, Tina lies in bed as she tells Shalin that he upset her.

However, he keeps on saying that he had no part in it and leaves her while she starts crying.

Afterward, Bigg Boss tells the housemates to go to the garden area while Shalin goes to Tina and tells her that he wants to console her but can't because of her actions.

They both argue as everyone goes to the garden where MC Stan's fans cheer up seeing him.

Seedhe Maut and Ikka in the house

Afterward, Bigg Boss introduces the guest and starts Seedhe Maut duo and Ikka while saying that this season has had many things done for the first time such as having a housemate do a live concert inside the house.

The housemates and fans get excited as Sajid Khan introduces the guests and hosts the event with his improv rap.

Seedhe Maut kicks off the event with their famous songs while Tina tells Shalin to not be close to her as it will give the wrong idea to everyone.

However, he whispers something in her ear making her smile.

Further, they both dance together while Tina confesses to Shalin that he is making her fall in love with him and is then breaking her heart over again.

Just then, Priyanka comes there, telling them to always stay lovely while Tina refuses by saying that they are not in love.

Bigg Boss interrupts the event and scolds Tina and Shalin for speaking in English while Shalin has even removed his mic.

Shalin excuses that he removes the mic cause he was dancing around and laughing while Stan mocks him stating that Shalin will never learn.

Ikka AKA Nishu starts his performance next while the housemates and fans jump around and enjoy the performance.

Ikka asks the housemates if anyone is an Aashiq (Lover) inside the house and states that his next song is for heartbroken lovers.

Ikka sings the song 'Woh' while the housemates enjoy it.

Finally, MC Stan starts his performance with the famous song Ek Din Pyaar and continues with the songs such as Kal Hai Mera Show and Kahan Par Hai (written especially for his fiancee Boba AKA Anam Shaikh).

MC Stan sings his diss song 'Snake' next and jokes that they even have a snake inside the house.

Afterward, MC Stan and Ikka sing the song they have written for their parents 'Maa Baap', and ask the fans who would like to hear the song.

The housemates and fans cheer as the duo starts their last song for the night.

Further, Bigg Boss bids the fans goodbye while the housemates and the special guests enter the BB House once again.

Bigg Boss greets the housemates a happy new year once again and tells the guests to bid them goodbye and exit the house.

Afterward, Bigg Boss calls Stan inside the house and tells him that they are grateful to him for making Bigg Boss' new year this entertaining.

© Copyright tellybest.com, 2022, 2023. All Rights Reserved. Unauthorized use and/or duplication of any material from tellybest.com without written permission is strictly prohibited.
Cached Saved on: Wednesday 25th of January 2023 11:15:40 AMCached Disp on: Thursday 9th of February 2023 05:46:31 AM