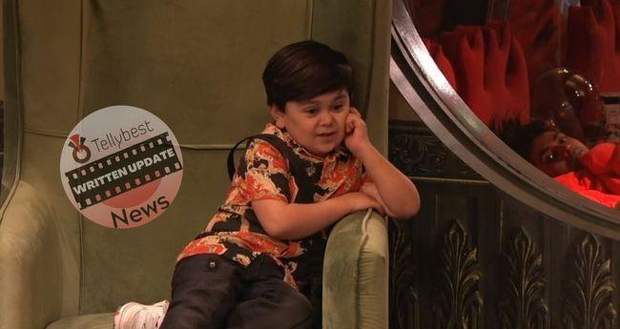 Today's Bigg Boss 16 1st November 2022 episode (day 32) starts with the contestants waking up and singing the Bigg Boss anthem at the top of their lungs to remove the sleepiness from their bodies.

Soundarya Sharma starts dominating Tina Datta in the kitchen over how food should be made and Tina tells Gautam Vig to change her duties and give the kitchen duty to Sumbul Touqeer.

Soundarya refuses to acknowledge that she is dominating and says that it is Tina's problem only.

Meanwhile, Shalin Bhanot tries to fill Archana Gautam's ears by telling her that all the female contestants teamed up to handle the kitchen once she moved out.

At the same time, Sajid Khan talks to his friend gang and teases Gori Nagori by telling her that she is looking like a tomboy.

MC Stan talks to Shiv Thakare and tells him that he thinks Gori is just acting of being their friend to get priority in the BB House.

Archana afterward tells Gautam that she will cook the whole dinner.

Ms. Sharma gets consoled by Stan, the Rapper!

Later, Soundarya vents to Stan and tells him that the housemates do not want her to become captain so that they don't have to cook.

Just then, Gautam comes there with his new clean shaved face and starts arguing with Soundarya instead of consoling her.

Archana bashes Tina regarding the proportions of the food being given while Tina tells Gautam that he is being unfair by not giving Chapati to all the contestants.

Later, Shalin is arguing with Priyanka Choudhary and mocks her by telling her to laugh at the medical conditions of the contestants.

While Shalin and Priyanka are busy arguing, Archana makes a side comment and calls Priyanka 'Nali Wali Aurat'.

At night, Shalin, Stan, and Tina are discussing Shiv's game plan and decide to support him over Gautam if it ever comes to that situation.

Around midnight, Soundarya tries to talk to Gautam but he starts being angry at her and makes her leave him alone.

The next morning starts with all the contestants singing and doing the BB Anthem.

Further, Archana talks to Soundarya and tells her how she had gotten kidnapped and scammed once.

Later, Bigg Boss announces that it is time for them to do the nomination process.

However, before that, Bigg Boss gives the contestants the chance to decide if Gautam should get special privileges or not.

The majority decides that Gautam should not get any special priorities after which Bigg Boss tells the housemates to wear the special skin-textured bags.

Further, Bigg Boss scolds Sajid and tells him to not smoke in a group or else the cigarettes will also be sacrificed.

The nomination process starts and Bigg Boss tells the contestants to stab two people in the bags with fake swords and starts with Sumbul.

Sumbul nominates Archana who takes it to heart and also takes Sumbul's name when it is her turn.

Bigg Boss tells Abdu Rozik to come alone and voice his opinions by himself.

Abdu nominates Sumbul and Priyanka while stating that both of them are underestimating him while Priyanka is misjudging him.

In the end, Sumbul, Soundarya, and Archana get nominated for elimination while Bigg Boss makes them keep the jacket on to remind them to get take anyone's sorry.

Afterward, Priyanka and Shalin once again argue and go on to say that the other does not have any 'Aukat' to talk to them.

Ankit Gupta tries to calm her and tells her to keep silent now which hurts Priyanka who thinks that he does not support her in her fight.

Sajid tries to resolve the situation between Ankit and Priyanka but they both keep arguing and say that they are just burdens to each other.

Later, Sajid and Abdu do a little skit like the Big Bulletin and interview Gautam.

Abdu asks Gautam what he would choose between Soundarya and ration and he chooses ration.

Sajid reminds them that Soundarya is vegan so Gautam will eat the ration anyways.

In the evening, Stan sits with Gori who says that she does not want to be in their group anymore as she hates having to do Sajid's laundry like she is his servant.

Further, Gori gives an idea to Soundarya and they both tell Gautam that they do not wish to do the cooking anymore but he convinces them to bear it for two days more as he will start his game afterward.

After a while, Bigg Boss tells Soundarya, Sumbul, and Archana to remove the bags and remember who stabbed them in the back.