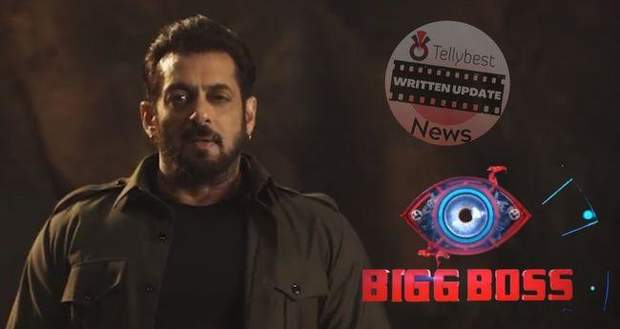 Today's Bigg Boss 16 1st October 2022 episode starts with Salman Khan making his grand entry at the grand premiere and greeting the audience, saying they should expect the unexpected this Bigg Boss Season 16.

He informs that Bigg Boss will play with the contestants this time along with himself and they might get into an argument.

The First Contestant of BB 16 is Nimrit Kaur Ahluwalia

She tells Salman Khan that he has been very lucky for her since she started her journey as ‘Choti Sardarni’ and he was there at the promo release.

Nimrit goes inside the house and Bigg Boss asks her to roam around and discharge duties and beds to the contestants who come inside.

Abdu, AKA, Abdul Roziq from Kazakhstan is 19 years old, a singer, and a boxer.

Khan jokes with Abdu saying since his Hindi is a little weak and when people fight inside, he can always use his boxing skills.

The third pair of contestants is Fateh and Tejo from the famous Colors TV show Udaariyan.

Priyanka Choudhary and Ankit Gupta reveal that they are not on speaking terms currently while Salman Khan jokes that a boy and a girl can not remain friends, hinting that they are boyfriend and girlfriend in real life.

Ankit reveals he gets nervous in relationship talks and says her and Priyanka’s chemistry has been tested but not their biology.

Salman Khan tests them and asks their relationship status and they both say they are best buddies.

Khan teases both of them, saying they have so much romance in their eyes for both of them while they both go inside the BB16 house.

He sings his song ‘Basti Ka Hasti’ and says his motive to enter Bigg Boss is to do meditation, gym, and detox while Salman chuckles and asks him what if he gets unstable inside the house.

Altaf reveals the story behind his mc stan shoes and says it took him 3-4 years to reach where he stands right now.

Salman Khan teases MC Stan when he reveals he will miss his girlfriend, Anam, the most whom he lovingly calls ‘Booba’.

Archana Gautam who has also participated in the MLA election is the next contestant and gets introduced as the ‘Bikini Model’ by Salman Khan. Gautam reveals she is not scared of anyone inside except attachment as she only had one boyfriend and got betrayed.

Gautam Vig says he is here to find real ‘mohabbat’ while Archana Gautam says she wants a partner who can romance her from behind and enacts a romantic scene with Gautam Vig on the stage.

Before going inside the BB16 house, Salman hands Archana her beloved ‘Sil Batta’ as she cannot do without eating chutneys.

Later, Nimrit gets called inside the confession room by bigg boss where he says Nimrit has to allot duties herself, not ask the contestants what they want to do.

BB is unhappy with Nimrit as she is not being a leader and asks her to prove herself.

Later, Archana laughs, saying Abdul made a wise choice choosing a single bed because someone might slap him in the middle of the night without noticing him due to his small stature.

Shalin Bhanot is the next new contestant who says he wants to win Bigg Boss 16 but hasn’t watched it before ever. Salman Khan tells him that since Shalin doesn’t know how to do any household chores, he shouldn’t expect that no duties will be allotted to him.

Soundarya Sharma who is a real-life dentist says she is here as an Alpha female and performs beautifully while Shiv Thakare joins the Bigg Boss 16 stage as well who has been Bigg Boss Marathi 2 winner.

Soundarya Sharma taunts Nimrit Ahluwalia for assigning her a bed herself while Nimrit says she is already chosen as the captain of the house.

Imlie, AKA, Sumbul Touqeer rocks the stage with her ‘Chaka Chak’ performance and she reveals she is not nervous but only scared of an angry Salman sir who appears on Weekend Ka Vaar.

Sumbul performs poetry written by her father as he joins him on stage and says he is glad to be standing next to Salman Khan side by side.

Salman Khan wishes Sumbul the best of luck and asks her to be strong as she is the youngest contestant of Bigg Boss Season 16!

Inside the house, Manya asks Nimrit to shift her bed as she is not comfortable with the lighting and Archana jumps into conversation abruptly. However, Nimrit asks Archana what her problem is while Manya states she will not do cleaning, only cooking.

Later, Manya tells Archana not to react as it is their first day and Nimrit is the captain.

Gori Nagori lights up the stage with her Haryanvi dance performance on Bigg Boss 16 stage and Salman Khan calls her ‘Haryana Ki Shakira’.

Salman Khan wishes her well while she asks how did he like his performance. Both of them dance as Gori Nagori teaches Salman how to twirl his stomach and belly dance.

Gori reveals she doesn’t know how to speak English but Salman says she can use this to her advantage to connect with the audience.

Tinna Dutta and Srijita De, the next pair of contestants say they have a connection since they did Utaran together and are entering bigg boss at the same time.

However, Salman Khan shows a controversial clip of Sreejita doing an Instagram live where she says Tinna is not her friend.

Inside the house, Archana Gautam and Nimrit Ahluwalia get into an ugly spat over a bed while Archana asks bigg boss to send her bags as her bed is being snatched away.

Sumbul and Abdu enjoy in the background while Shiv Thakare gets Archana alone to calm her down.

Sreejita and Tinna also enter the house with Abdu running away from Archana who says she wants to lift him up just once.

Sajid Khan tells Salman he got arrogant and has not received any single work in the last four years.

He wishes to come out more humble and cringes at whatever he has said in his past interviews, wishing he could erase them.

The lovely Shehnaz Gill, ex-contestant of Bigg Boss 13 wishes Sajid Khan the best of luck while Salman Khan asks Sajid to behave himself.

Everyone asks Sajid in the house whether he is a guest or a new contestant and he says he is here to live with everyone only.

© Copyright tellybest.com, 2022, 2023. All Rights Reserved. Unauthorized use and/or duplication of any material from tellybest.com without written permission is strictly prohibited.
Cached Saved on: Tuesday 22nd of November 2022 08:02:51 PMCached Disp on: Tuesday 6th of December 2022 12:30:01 PM