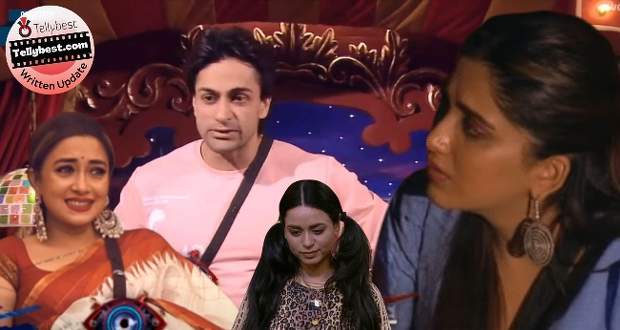 Today's Bigg Boss 16 20th January 2023 episode (day 112) starts with all the housemates waking up to the siren and going to the garden to sing the BB Anthem.

Shalin Bhanot climbs the wire cage on the terrace and describes the outside scenery to Soundarya Sharma while she continues telling him to tell her what more is happening.

Meanwhile, Nimrit Kaur Ahluwalia sits with the Mandali and asks them what Archana Gautam is complaining about.

Nimrit goes to Archana who reveals to her that she is upset since she gave MC Stan a milk carton when she had two and he didn't even offer her a single packet of milk when he won it the previous day.

Further, Nimrit goes to the Mandali and talks to them about Archana while Archana comes there and tells them to talk about her in her face and not be cowards who talk behind others' backs.

Later, Shalin takes Nimrit aside and asks her if the Mandali is upset with her for talking to him while Nimrit states that it is her own equation with her friends.

Shalin further gossips about Tina and tells Nimrit that Tina had talked to him outside the house.

He further imitates Tina talking to his mother while Nimrit says that Tina wanted to play the love angle at first and now she is playing the enemy angle.

Afterward, Shalin talks to the camera and says that it would be good if he and his mother host a show.

Shalin continues to attract the camera's attention as he recites the dialogues said by the previous contender Shehnaaz Gill and jokes that he wants to leave the house.

Priyanka and Tina Datta keep on teasing Stan who refuses to move away from Shiv and Sumbul Touqeer Khan.

Later, Shalin tells Sumbul that she can talk to him if she feels that no one is there for her to talk to.

Bigg Boss calls all the housemates into the garden area and reveals to them that the famous Astrologer Saurish Sharma is coming into the house.

Saurish greets the housemates and starts talking to Shalin straight while telling him that his 'Sadhe Sati' has started which is a period of a learning lesson for him.

He goes on to tell Tina that her attitude has become an obstacle in her life and tells her to be carefree from now on.

Saurish talks about Sumbul afterward and tells her that she has struggled a lot in the past which is why she has become guarded.

For Archana Gautam, Saurish reveals that every 4th consecutive year for her is going to be successful and reveals that she has superpowers of intuition and a black tongue.

It means that everything she says might come out true anytime in the future.

Afterward to Priyanka, Saurish tells her that she should not think of a future with Ankit Gupta as it will dull her future which is supposed to be filled with wealth and fame.

For Nimrit, he tells her that her 'Sadhe Sati' has also started while giving her the advice to become a little selfish in life and not help anyone without monetary or networking benefits.

Sourish tells Shiv that his life is going to be brighter after marriage and tells him that he is sure to do a lead in a Marathi movie and another reality show.

Sourish goes on to tell MC Stan that he should take criticism with a smile as he is seeing many great collaborations for him, even international ones.

Sourish flirts with Soundarya as a joke and tells her to never talk about her plans before they are executed as it will never work out for her.

He also praises Soundarya telling that she uses her sugarcoated words and sweet attitude to get things done her own way.

Afterward, in personal sessions, Saurish tells Shalin that his potential is getting hidden.

Tina asks about her marriage while Saurish tells her that it is not very clear right now.

Archana asks about her political career while Saurish tells her that her seriousness is not being shown in her actions and tells her that he sees a stable career for her in the entertainment industry.

Shiv comes to ask about his ex while Sourabh tells him to think about the future and says that she is sure the girl Shiv is going to marry will not be Maharashtrian.

Later, Archana tells Priyanka that she feels Priyanka is going to get a big movie or a show in the future while they tell her about Shalin's mind game.

At the same time, Shalin continuously asks Bigg Boss to call him into the confession room with an angry attitude.

Bigg Boss calls him into the confession room and Shalin starts cursing as soon as Bigg Boss agrees that the room is a soundproof room.

Shalin keeps on asking Bigg Boss to go off the grid as he is getting depressed and starts talking about his consent not being taken for the extension of the show.

Shalin continues acting all mighty and states that he knows all the contestant's contracts and how much MGs they are getting.

Bigg Boss starts a quiz with him while revealing that his answers are all wrong.

Shalin starts asking for his lawyer while Bigg Boss says that it is not allowed.

Bigg Boss berates Shalin for wrongly accusing them of not taking care of the contestant's mental health as he has asked him almost six times if he wants to talk to a psychiatrist.

Afterward, Shalin sits down on the couch and starts doing his drama and states that the voices and actions of the housemates are haunting him at night.

Further, Shalin gets out of the house and starts acting nice to the housemates again.

He asks Soundarya if she wants to eat and she states that she is not feeling hungry.

Shalin sits beside Archana and listens to her rants while eating peacefully.

At the same time, Shiv pinches Nimrit's whole face and tells her that he gets jealous of her making other friends too.