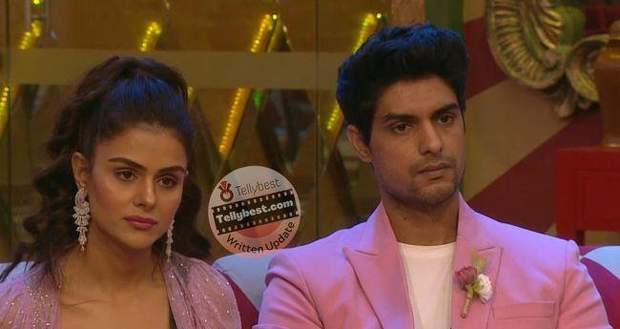 Today's Bigg Boss 16 20th November 2022 episode (day 51) starts with Salman Khan greeting the audience once again and heading straight to the contestants who are waiting for him eagerly.

Shiv Thakare takes Priyanka Choudhary while Salman reveals that the majority of the contestants took Priyanka's name in the same task previously.

Shiv reveals that he wants to show the mirror to Priyanka as she is loud & not always correct.

Afterward, Salman takes Nimrit Kaur Ahluwalia's name and says that she is correct in her observation about Priyanka but does not talk more about it.

Salman further asks all the contestants about Priyanka's actions and her words portraying a double standard.

Salman Khan also reveals how she does not like that Sajid Khan got the ration but fought against Archana Gautam for the same thing.

Salman also goes on to say that Priyanka is trying to copy Archana but cannot become humorous like her.

Further, Salman talks about Nimrit and tells her that she has become the best friend of the main lead that gets killed off at the climax.

Nimrit reveals that she is aware of it and is planning to become the heroin of her own movie.

Salman questions Sajid why Sumbul Touqueer become more prioritized than Nimrit for him.

Sajid says that he has formed an uncle-niece kind of bond with Sumbul which is why he feels protective of Sumbul.

Salman asks the contestants what is their guess on why Nimrit is not coming to the front as a contestant.

Nimrit reveals that she is feeling hard to cope after getting off the anxiety pills.

Salman encourages her to keep on moving and tells them that he will be back in some time.

Sumbul DOES NOT HAVE A CRUSH on SHALIN!

Sumbul makes it clear to Shalin Bhanot and Tina Datta that she does not have a crush on Shalin.

On the other hand, Archana tells Soundarya Sharma that she wants Salman sir to talk about her issue about outfits being thrown away.

Salman returns and gives the contestants a task where they have to reveal who their target is and put red-colored water on them.

Salman tells the contestants that they will have to be careful of Priyanka and Archana as they are playing their games very nicely.

Further, Salman jokes about eliminations and tells Tina that she is eliminated.

Shalin again says that he does not want to go while Salman tells Gautam Vig that he is eliminated and tells him to come out of the BB House.

Salman goes off the screen while the contestants think that it is a joke and no one will be eliminated this week.

However, Bigg Boss tells Gautam to say goodbye to all the contestants and exit through the main door.

Soundarya cries as Gautam hugged everyone except for her while he tells her that he does not want to fight.

Gautam leaves while Soundarya cries saying that Gautam fought with her for the whole day and did not even give her a proper goodbye.

Shiv tells Nimrit that he thinks Gautam tried too hard to become a player too early into the game which led him to be hated.

At night, Abdu Rozik tries to comfort a crying Soundarya who is missing Gautam by telling her that she should focus on her game now.

The next morning, Shalin is taking advice from Soundarya on what he should do with Sumbul and she tells him that he should keep his distance.

Further, Shalin introduces Tina and Soundarya to each other in a joking manner and tells them that he is playing cupid between them.

Elsewhere, Sajid, Shalin, and other contestants put Abdu in the smoking room and make him bring the light from it.

Sumbul Touqueer has a Boyfriend?

Afterward, Shalin is talking to Sajid and Tina about Tina while Sajid reveals that Sumbul told him about her having a boyfriend whom she wants to marry.

However, Tina says that it is all bullshit as Sumbul is weaving different stories for everyone.

Afterward, Soundarya sits with Archana and tells her about the interaction with Shalin.

Archana suggests she make Tina jealous by talking to Shalin and Soundarya agrees.

Later, Archana promises Sajid that she will do her duties and Shalin agrees to take her clothes out of jail.

Shalin follows Tina around the house and requests her to do her bandaid while telling her that he is only doing all this to return the favor.

Further, Tina tries to apologize to Shalin by helping him do the dishes while Shalin acts aggressively with her and tells her to leave.

Afterward, Tina is complaining to Nimrit and tells her that Shalin's body language and behavior remind her of her ex-boyfriend who was very manipulative.

On the other hand, Archana keeps on irritating Shalin by singing love songs.

Elsewhere, Archana asks Abdu why he didn't talk to her the whole day the previous day and he lies to her that it was Sajid who told him to not talk to Archana.

Later, Shalin goes to Soundarya and tells her that he would like for them to be friends again and she also agrees with the condition that she doesn't want Tina to mind it.

Shalin-Sumbul agree to keep their distance

Sumbul also talks to Shalin and tells him that she does not want him to be rude to her while he also tells her that he wants her to make efforts in keeping distance between them.

Shekhar Suman returns once again with the Big Bulletin and entertains the contestants with his unique poetry and comedy.

Shekhar talks about the recent affairs within the BB House and roasts all the housemates.

Further, Shekhar also narrates how they all would talk if they were in a group chat and makes everyone laugh.

Shekhar also asks the contestants whom they would like, dislike and block if they were all on social media.

Abdu likes Sajid, dislikes Archana, and blocks Priyanka as she is always arguing.

In the end, Shalin hugs Tina and thanks her for giving him a 9 out of 10 for his body.

© Copyright tellybest.com, 2022, 2023. All Rights Reserved. Unauthorized use and/or duplication of any material from tellybest.com without written permission is strictly prohibited.
Cached Saved on: Tuesday 22nd of November 2022 11:28:57 PMCached Disp on: Tuesday 6th of December 2022 01:29:06 PM