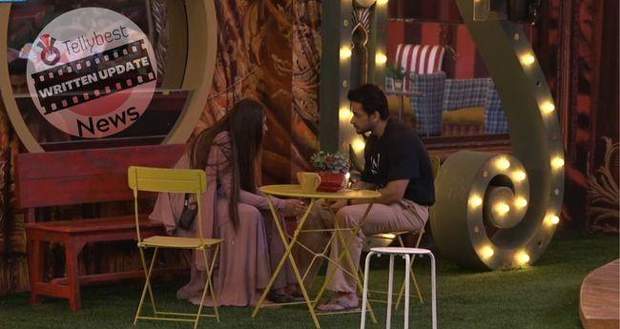 Today's Bigg Boss 16 20th October 2022 episode 20 (day 20) starts with Tina Dutta feeling down due to her argument with Shalin Bhanot.

However, Bigg Boss calls Tina into the confession room and reveals to her that her pet is in critical condition and that they told her as the pet is very dear to her.

Tina goes outside and cries to Shalin while revealing that her pet is in critical condition.

Shalin comforts her and calms her while putting his arms around her when suddenly Bigg Boss calls them into his room.

They both go into the confession room and Bigg Boss tells them that they should have not talked about the pet's condition as it is a personal matter and that they told her only because of her attachment to the pet.

However, Bigg Boss lets them go easily and takes credit for patching things up between Shalin and Tina.

On the other hand, Shiv Thakare and Sajid Khan talk about Shalin being a 'Paltu Aadmi' to MC Stan.

At night, Soundarya Sharma and Gautam Vig are talking while Archana Gautam says that they are disturbing her beauty sleep and tells them to talk the next day.

The next day starts with the contestants going to the garden and singing the BB Anthem.

Afterward, Gautam talks to Sumbul Touqueer and tells her that she should tell him and speak up if she finds his jokes inappropriate and not involve Shalin in them.

On the other hand, Shalin apologizes to his teammates and tells them that he has to support Tina right now as a friend.

In the afternoon, Soundarya talks to Tina about Shalin kissing her and now "Apni Izzat Apne Haath Mein Hain (her respect is in her hands)' only.

Further, Bigg Boss tells the contestants that they have bored him and states all the contestants will be called into the confession room at certain times to share some juicy stories.

Manya Singh goes first and tells Bigg Boss about the love triangle between Sumbul-Shalin-Tina while another triangle is between Shalin-Soundarya-Gautam where Soundarya is trying to play the victim and is trying to get close to the person who is more powerful.

Afterward, Sumbul goes and tells Bigg Boss that the contestants are gossiping about Shiv not being a good captain.

Sajid and Abdu go inside and tell Bigg Boss that the ladies are taking advantage of Abdu to get footage while Abdu likes Nimrit.

Bigg Boss does not get impressed by Nimrit's gossip and tells her that he will have to drink tea to keep himself awake.

Later, Bigg Boss sends a grater for Archana which makes everyone say that Bigg Boss only listens to her.

Further, Archana and Shiv keep arguing with each other while Bigg Boss gets disappointed with Gori Nagori and  Soundarya's gossip.

In the garden, Shiv and Stan sit with Shalin and bitch about Archana saying that she is overdramatic.

Bigg Boss announces that the confession room is going to open for the last time and Gautam tells BB that he thinks Gori observed Archana and copies her to get footage.

Meanwhile, Shiv also enters afterward and tells Bigg Boss that he thinks Tina is only playing with Shalin while Shalin has actually started falling in love with her.

On the other hand, Shalin goes inside and tells Bigg Boss that he thinks Tina has started falling for him.

At the same time, Gori notices Shalin's ring on Tina's fingers and questions her about it but Tina lies and says that it is hers only.

Gautam, Priyanka Choudhary, and Archana are teasing each other while Archana jokes that she was expecting Good News after seeing Gautam and Soundarya cuddled up last night.

In the end, Bigg Boss tells the contestants that he was impressed by only Archana and Manya's gossip and opens up the greed area from where they get a gift hamper of Dark Fantasy chocolates.

At night, Archana tries to convince Tina and Nimrit to not do their dishes as an act of rebellion against Shiv.

Meanwhile, Gautam sits beside Soundarya and talks to her about dumb things while flirting with her.

Further, as they are leaving the room, Gautam leans into Soundarya and she gives him a peck on his cheek while hiding away from the kiss that he tries to give her.

© Copyright tellybest.com, 2022, 2023. All Rights Reserved. Unauthorized use and/or duplication of any material from tellybest.com without written permission is strictly prohibited.
Cached Saved on: Monday 21st of November 2022 09:31:56 AMCached Disp on: Wednesday 7th of December 2022 12:07:53 PM