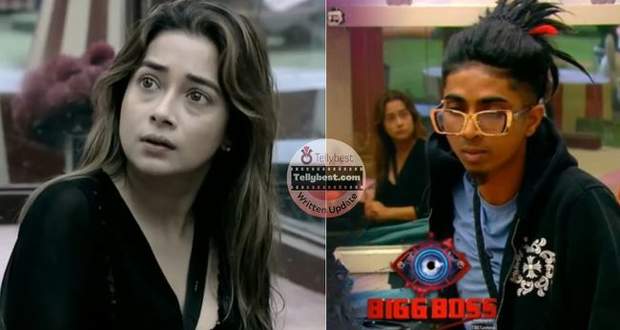 Today's Bigg Boss 16 21st December 2022 episode (day 82) starts with all the housemates waking up to the siren as they go to the garden area and sing the BB Anthem.

Archana Gautam tells Soundarya Sharma about a bug inside the Bigg Boss house that will predict whether they will be eliminated or not.

Archana further talks to Soundarya about her dream guy while Tina Dutta asks for more time to make breakfast while lying that she is sick.

Meanwhile, Sreejita De tells her to state whether she wants to cook or not.

Further, Tina lies on the bed and tells everyone to go to sleep as Soundarya herself is sleeping while being a captain.

Sreejita goes to Soundarya and tries to talk while Archana keeps on irritating Sreejita and making her angry.

Tina thanks Archana for standing up for her while telling Soundarya that Sreejita was just trying to poke her.

Later, Tina goes to cook and starts arguing with Sreejita with the support of Shalin Bhanot and Vikkas Manaktala while Soundarya comes there and calms the argument.

Further, Shiv Thakare and others try to comfort an upset Sreejita while Tina bitches about her to Shalin and Vikas.

Tina and Stan call each other out!

Afterward, Vikas argues with Sreejita while she walks away saying that she is always right.

Tina confronts MC Stan and asks him why he nominated her along with calling her fake.

Stan states that he never called her fake and tells her that he is hurt too.

She asks him why he's upset and he tells her that she broke their friendship over such a little thing and tells her that now he thinks she only became friends with him because of his fan following.

Tina feels hurt at Stan's words and starts crying while Stan leaves from there and tells Nimrit Kaur Ahluwalia about Tina's extra drama.

Later, Bigg Boss calls Priyanka Choudhary into the confession room and the rest of the housemates into the living area where they see Priyanka through the screen.

Bigg Boss asks Priyanka her thoughts on becoming friends inside the BB House and the housemates pressing the buzzer and losing money to bring back their desired ones.

Afterward, Bigg Boss tells Priyanka that she has a choice to get back 25 lacs for the prize money by pressing the buzzer and making Ankit Gupta exit the show.

However, if she does not press the buzzer, the prize money won't come back and Ankit will stay inside the BB House.

Priyanka decides to not press the buzzer and saves Ankit Gupta from immediate elimination.

Priyanka is a hypocrite!

The housemates get furious at Priyanka's hypocrisy and start arguing with her while Sajid calls her a hypocrite for saying that he was wrong for pressing the buzzer for Sumbul Touqeer.

Further, Sajid tells the housemates that he thinks Ankit will leave in this elimination round.

Afterward, Bigg Boss tells the housemates that now it is time for them to do the ration task.

The housemates get curious when Bigg Boss informs them that someone will be entering their tasks at each round and they will have to act like the guests are ignorant.

Firstly, two people come inside the house and start eating while Archana Gautam gets two strikes for moving away from them.

Afterward, a man comes and starts reading the letter from the family for Sajid but fails to get any reaction out of him.

In the next round, the two people again try to annoy Sreejita and Archana by making sounds while eating very close to their faces.

At the end of the task, Bigg Boss tells Stan that they have gotten access to basket number two also.

In the third round, two men again come and eat in front of the housemates while the bald man comes and starts reading the letter from Sumbul's father to her.

Once the person leaves, Sajid argues with Sumbul and makes her cry while Nimrit goes to console her and talk to her.

Sajid states that everyone is overreacting in the house trying to get footage.

Elsewhere, Stan tells Soundarya and Archana about his love story while Archana jokes with him telling him to romance her.

Tina tells Shalin that Stan is being two-faced right now while he has a problem when she sits with others like Priyanka and Ankit.

Lastly, Nimrit reveals how she was hesitant to enter the BB House at the start but now feels like she is at home with Soundarya and Stan.

Mc Stan jokes that it is a set and makes them laugh by saying that he was shocked to see the mashup of serials like Udaariyaan, Uttaran, and other shows inside the house.