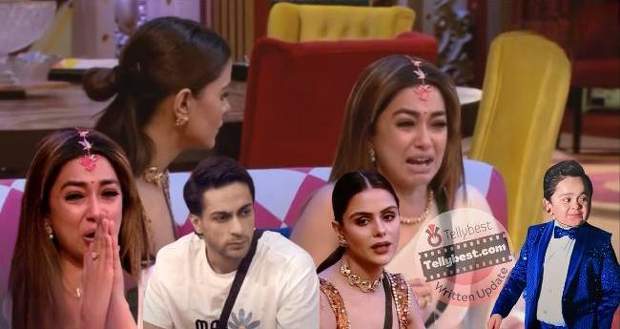 Today's Bigg Boss 16 21st January 2023 episode (day 113) starts with Salman Khan greeting the audience in his unique way and stating that the housemates have gone crazy in the past week.

Salman says that the audience waited for him the previous day while he did not come as Shalin Bhanot was busy entertaining the housemates.

He states that a task about rumors is going on inside the house and tells them to take a look.

Shiv Thakare voted for Shalin and revealed that Shalin was spreading rumors about him knowing some scandalous actions about Soundarya Sharma.

After the task ends, Tina goes to justify to MC Stan that she was not the one who knew about his video before the show and that it was Shalin who had said this to her.

At the same time, Shalin acts in front of Shiv and tells him that he is happy about always being true and does not care whether he gets out today or not.

Afterward, Salman Khan greets the housemates and tells Archana Gautam that he knows she is very confused about weekends.

Salman tells Archana to request Stan to get what is kept in the storeroom while joking that it is given by Buba to Archana.

Archana gets surprised as she unboxes the gift and sees a rose.

Salman tells Archana that it is from him.

Afterward, Salman talks to Nimrit Kaur Ahluwalia and asks her why she didn't believe Archana when Archana talked about Nimrit's father telling Archana to form a team with Nimrit and Soundarya.

Nimrit goes back on her words and starts trying to act civil while Salman reveals that Nimrit's father did say what Archana was trying to convey and tells Nimrit that she acted too offensive when Archana tried to bring it up.

Shalin is suffering from Alzheimer?

Further, Salman states that Shalin and Tina's topic/game has been the hot topic and tells them to state what they talked about each other in the past week.

Shalin lies that he does not remember while Nimrit and Priyanka speak up and state that Shalin talked about Tina going from one guy to the other guy.

Suddenly, Shalin states that he remembers everything now and starts justifying himself by saying that he just wanted to give Tina a taste of her own medicine since she continued to talk about him with other female contestants such as Sumbul Touqeer Khan and Soundarya Sharma.

The pair starts arguing with each other while Shalin states loudly that it was just said for the task and only because he thought they were in love which is not true.

Salman stops their argument and tells Shalin that if he is happy for his ex-wife, he should be happy for Tina too when she is trying to move on.

Shalin argues that he will not because Tina's moving on was not organic as she started dancing with Shiv as soon as they were over.

Salman tells Shalin to not talk when he is talking and goes on to talk about Tina stating that Shalin tried to contact her before the show.

However, Shalin clarifies that the person Tina is considering a 'close friend' is his PR manager whom he wanted to handle his PR for the time he is inside the show.

Shalin states that the PR manager told him that she is already signed with Tina with the condition that she won't handle anyone else including Sreejita De.

Salman also mentions the Dubai topic regarding Soundarya while Shalin reveals that it was Gautam Vig who had talked about the topic and that too inside the bathroom when things that were not that strict.

Tina tries to justify herself since she is the one who brought up the topic in front of the whole audience while Salman asks her how she would feel if she was in Soundarya's place.

Soundarya gets emotional and reveals that she is sick and tired of Tina's sick taunts since she did not want to underline the topic.

Salman goes back to Tina and asks her why she did not speak up for 15 weeks since she knew about Shalin's planning and his cheap things from the start of the show.

He goes on to question Tina about the narrative where she said Shalin asked her cheap things.

Shalin continues to justify himself by stating that he had even told the PR manager that he would let his reputation be destroyed if it becomes between him and Tina.

Salman tries to silence both of them while the pair continues to argue.

The contestants stop them and listen to what Salman is stating.

Salman asks Priyanka to be beware

Salman speaks up and says that Tina started exposing Shalin's "deeds" after Priyanka and Shalin's argument while Shalin and Tina had already fought with each other for two weeks by that time.

Tina cries and states that she picked up broken pieces of herself to fight back against Shalin as he was constantly blaming her for everything.

Salman states that his question is why she didn't say anything before and Tina responds that she did not think about him playing games inside the house until she was away from him.

Afterward, Salman tells Shalin to not speak about his ex-wife anymore while telling Priyanka to think about the question as to why Tina exposed Shalin after 15 weeks only when she knew it from the start.

Tina cries and says that she wants to leave the show since she does not want to be blamed for everything while Salman tells her that he is not saying it in an accusatory way.

Salman tells them that he has given them all the points of view and the screen goes blank while Priyanka tells Shalin to stop his blaming the game now.

Shalin argues that it was Tina who talked about him with her while Priyanka tells him to shut up.

Tina goes to her bed and starts crying and shouting that she wants to go home while Priyanka comes there and tries to calm her.

Tina states that this is what they wanted her to become and cries saying that they have broken her.

On the other hand, Shalin tries to justify that it was Tina who tried to contact him outside while Nimrit and others tell him to do not to drag it on.

Later, Priyanka is trying to console Tina while Shalin comes there and tries to act like the nice guy by telling Priyanka that he is concerned for Tina.

However, Priyanka shouts at him to leave while Archana comes there and tells them about Shalin's drama.

Shalin again goes to Tina afterward and requests that it is high time they sit together and talk.

Priyanka insults him stating that he is the one who wants to create drama and makes him leave.

Archana comes there and tries to make Tina and Priyanka laugh while Shalin tells Shiv that Tina was acting crying and is now laughing with Priyanka.

Sajid Khan & Abdu Rozik are back!

Meanwhile, on the stage, Salman welcomes the recently exited Sajid Khan and asks him what changes he is seeing after exiting Bigg Boss.

Salman also welcomes Abdu Rozik and greets both of them.

Afterward, Salman brings out a board and tells Sajid to state whom he would cast as different characters in different movies.

Further, Salman praises their game inside the house and shows their journey.

Afterward, Salman gives both of them a Hunk hamper and bids them goodbye.

Salman welcomes astrologer Saurish Sharma and talks to him about the housemates after which he bids them goodbye.

Salman again welcomes new guests Ekta Kapoor and Producer Diwakar Bannerjee on the sets and jokes that they won't leave without casting one of the contestants.

© Copyright tellybest.com, 2022, 2023. All Rights Reserved. Unauthorized use and/or duplication of any material from tellybest.com without written permission is strictly prohibited.
Cached Saved on: Wednesday 25th of January 2023 08:51:32 AMCached Disp on: Sunday 5th of February 2023 04:32:42 AM