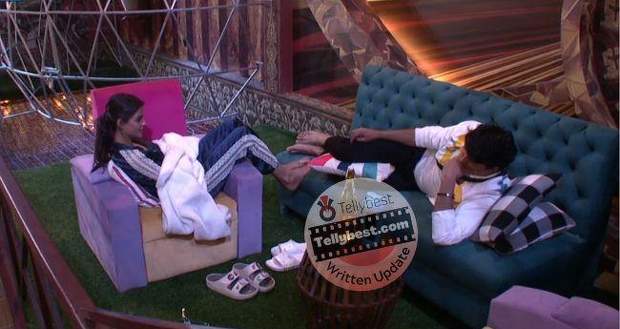 Bigg Boss 16 informs Sumbul that her father wants to talk to her since he has been sick for some time.

Sumbul starts crying as soon as her father asks her to stay away from Shlain Bhanot & Tina Datta.

Sumbul's father state that Shalin & Tina talk wrong about her back when she should have had friends like Fahmaan Khan.

Later, she asks Sajid Khan, the current captain, to change her bedroom to sleep and expresses that she wants to be the captain this week.

Sajid asks her not to become Gautam Vig 2.0 and get scared of nominations.

Meanwhile, Shalin & Tina talk about Sumbul. Shalin says he never felt that Sumbul was in love with him but Tina stays adamant that she was.

Tina states what is the point of saying she is in a committed relationship when Sumbul cannot give Tina time to talk to Shalin.

On the other hand, Shiv Thakare & Nimrit Kaur Ahluwalia converse about Tina & Shalin being with each other just for content.

Similarly, Archana Gautam & Soundarya Sharma say that Sumbul can be Tina's sister and Shalin's "saali" if they get married.

They also talk about Colours TV faces like Ankit Gupta, Priyanka Choudhary, & Nimrit having the chance to win.

Meanwhile, Shalin tells Soundarya she & Tina can be good sisters.

The next morning, the BB16 contestants wake up groggily & sing the anthem.

Soundarya asks Shalin to give her almond milk if he wants to be her friend.

Priyanka appreciates Soundarya's game while Shalin asks Soundarya to keep it a secret.

Later, Shalin reveals to Tina that he added sugar & water to the almond milk he gave to Soundarya & states he has been trained by Tina.

Tina then gets into an argument with Archana who asks her to pick up the paper she dropped.

Tina tells Archana she is irritating and gets exaggerated when Shalin starts entertaining her.

Archana tells Shalin that he is Tina's "chamcha" (servant) while Shiv derives enjoyment from the whole drama.

Archana warns Shalin that she will pull his attitude down her feet while Soundarya asks Shalin if he is scared of Tina.

Soundarya says Shalin is too confusing if he is not going to accept his relationship with Tina.

Shalin is nonchalant and says Soundarya doesn't need to worry since she has been the topic of many arguments between ShalIna.

Later, Soundarya discusses what Shalin talked about with Ankit & Archana. Ankit advises Soundarya to beware as both of them want to meddle their hands with her since she got many compliments on Weekend Ka Vaar.

On the other hand, Tina asks Shalin if it is his fault that he is entertaining Soundarya who has been asking for help for two days for her workout.

Tina covers her face with a cushion and asks Shalin to leave her alone as she feels he doesn't care about her.

In Sajid's room, Abdu acts as if he is irritated by MC Stan & Shiv handling him like a baby.

Sajid asks Nimrit if she has clarified with Abdu about him having a crush on him.

However, Shalin turns the situation around as he whispers into Sajid's ear, implying that the Nimrit-Abdu situation is like Shalin-Sumbul.

Nimrit gets offended while Shiv comforts her.

Similarly, Soundarya states to Ankit & Priyanka that if Sajid wasn't there to pacify things. Shiv's group would have fought crazily.

Bigg Boss gathers everyone in the living room and announces that the next Raja/Rani of this house will be between Nimrit, Shiv, & Abdu.

However, MC Stan cannot participate in this activity since he is nominated.

The next task will have the people from the Non-favourite team sit in a skeleton head in the activity room & order Nimrit, Shiv, & Abdu to do a task within a time limit.

If one of these three contestants pull their earphone out, they will be disqualified & Sajid will be the "sanchalak" (referee).

Priyanka gets called and she orders Nimrit to do a hundred pushups.

However, Nimrit pulls earphones out twice after getting irritated at Priyanka & gets disqualified.

Later, Archana gets called to order Shiv around. She asks him to eat a bowl full of salt but Sajid cancels the task as Shiv can fall sick like this.

Archana then asks Shiv to drink three bottles of water as Soundarya & Priyanka state Archana had to mention the time limit.

Tina goes to Archana to give her examples of ordering Shiv around and Shiv hears this, feeling Tina is playing a double game.

Shiv wins the task & it is Ankit's turn to order Abdu.

Most of the tasks given by Ankit are canceled by Sajid, so Ankit quits the game while Priyanka calls a screaming, mad Sajid "a cheater!".

Bigg Boss then calls Shalin, Tina, & Soundarya to be the king-makers and announce who would they like to see as a captain - Abdu or Shiv.

Tina & Soundarya take Abdu's name but Shalin convinces them to take Shiv's name as they would all like to see how fair Shiv is.

Bigg Boss personally taunts Shalin for bringing Soundarya & Tina together while other contestants laugh out loud.

Later, BB16 reveals that the people living in Room 2 will become the cooks of the house which has Sajid & Stan.

Archana wants to have an egg fight with Soundarya

Archana laughs & tauntingly asks Sajid if he knows how to make food or not.

At night, Abdu asks Ankit why he gave that kissing-on-lips task to him but Ankit says it was a joke.

She then laughs about Tina who forgets her food bowls for four days and talks about hygiene. Archana then states she would like to break eggs on Soundarya because she cleans everyone's food up & should not.

© Copyright tellybest.com, 2022, 2023. All Rights Reserved. Unauthorized use and/or duplication of any material from tellybest.com without written permission is strictly prohibited.
Cached Saved on: Wednesday 23rd of November 2022 11:27:22 PMCached Disp on: Tuesday 6th of December 2022 02:05:01 PM