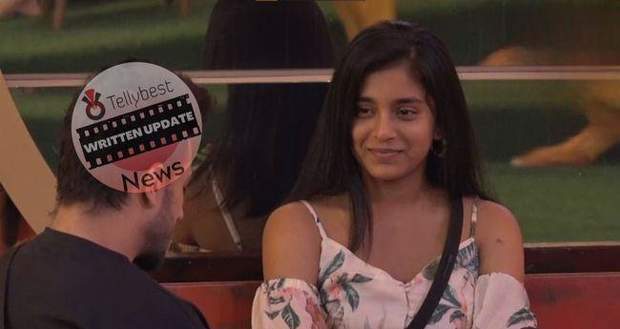 Today's Bigg Boss 16 21st October 2022 episode (Day 21 live) starts with the contestants getting irritated as the dishes are still not done and complaining to the captain Shiv Thakare.

Further at night, Gautam Vig, Nimrit Kaur Ahluwalia, and Soundarya Sharma are talking loudly which wakes up Archana Gautam and she goes to sleep in the hallways.

Gautam apologizes to her and makes her go back to her bed while Nimrit goes to prank her.

Afterward, MC Stan, Shiv Thakare, and Gautam go to Priyanka Choudhary and Ankit Gupta's room even after they tell him to not disturb their sleep and wake them up.

Priyanka turns into an angry bird

Priyanka and Ankit get angry while Archana also speaks up and starts bashing Shiv and others for disturbing their sleep.

Stan tells the camera that he will break even more things if he doesn't get his cigarettes.

Priyanka wakes up even Sajid Khan to create more drama while Shiv and his team say that Priyanka is fighting unnecessarily.

Near 4 in the early morning, Nimrit tells the contestants that they should not do anything wrong and will just complain to Bigg Boss that they are damaging the mics.

After some time, Archana and Priyanka come to their room and starts banging the utensils to create loud noises as Archana keeps giving them a lecture about not waking up contestants for their own entertainment.

The next morning starts with everybody falling asleep without doing their tasks after the usual Bigg Boss Anthem while Ankit and Archana fall asleep right afterward.

Shiv doesn't do anything while Priyanka says that today the wake-up alarm will be heard a lot of times.

Shiv tries to wake up Archana and warns her that he will throw water on her if she doesn't wake up.

After Shiv drops a little water on Archana while she tells him that she will drown him in water if he does it again.

Afterward, Manya complains about Sumbul Touqueer not having any duty while Shiv comes there and tells her that Sumbul cleans the bathroom area and asks her to not complain about others.

Shiv goes to them and tries to convince them to support him or else the argument will keep on going.

Later, Shiv tells Priyanka and Archana to do their duties and cook lunch while both the girls argue that they will do it once they feel refreshed.

Afterward, Sajid tells Shiv that they are just trying to make Shiv look like a bad captain.

After lunch, MC Stan convinces Abdu Rozik to steal the Dark Fantasy biscuits that were given to Manya and Archana as a reward.

Bigg Boss collects all the contestants and informs Shiv that he is being given the authority to punish the housemates who he deems deserving.

Shiv punishes Priyanka and Archana and puts them in different jails.

Further, Soundarya also gets punished for speaking in English and gets put in a box.

In the evening, Bigg Boss calls Shiv a coward for trying to look good to the contestants and the viewers as soon as he became a captain and fires him.

Archana gets chided by BB for making a joke out of being punished and tells her that she will be the next captain as her own special punishment.

Bigg Boss tells Archana that he hopes she makes the house good enough to be shown on national television.

Further, to irritate Archana, Manya and Nimrit start eating the Dark Fantasy chocolates which are forbidden, and they start speaking English too.

All the contestants start stealing from Archana's room while Nimrit intentionally starts mocking Archana by speaking in English to irritate her.

Further, Archana notices the chocolate in the hands of the housemates and starts questioning them while everyone takes Shalin's name to confuse her.

Afterward, Archana and Manya get into a huge argument as Manya refuses to do the dishes and feels insulted when called Miss India Runner up.

At night, Tina, Shiv, Gautam, and Nimrit keep singing to irritate Archana while she convinces them to let her sleep at night so that they can irritate her in the morning again.

© Copyright tellybest.com, 2022, 2023. All Rights Reserved. Unauthorized use and/or duplication of any material from tellybest.com without written permission is strictly prohibited.
Cached Saved on: Monday 21st of November 2022 05:05:08 AMCached Disp on: Monday 5th of December 2022 12:55:53 AM