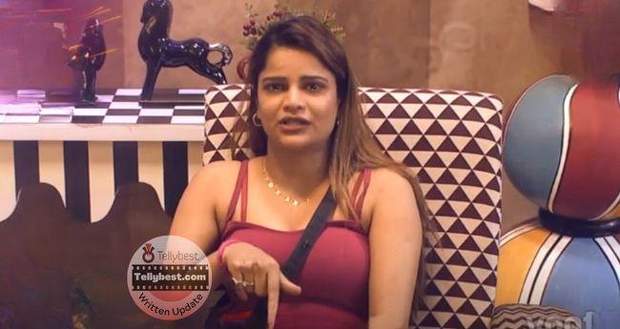 Today's Bigg Boss 16 22nd December 2022 episode (day 83) starts with all the housemates waking up to the sirens at eight and walking to the garden to start off their day with the BB Anthem.

Shalin Bhanot back hugs Tina Datta and thanks her for making coffee.

Meanwhile, Soundarya Sharma and Sreejita De laugh at Tina and talk about her.

Sreejita talks to Soundarya and tells her about Tina's behavior and her past interactions with her while calling Tina a sadist.

Later, Archana Gautam comes to Sreejita and tells her the members from the room of six have refused to eat rice and need Chapati.

Sreejita and Soundarya state that it is not their duty but the cook's which angers Priyanka Chahar Choudary as she is the cook at the moment.

Elsewhere, Tina tells Shalin that she thinks he is taking steroids which angers him, and tells her to not talk about such things in front of the national television.

Afterward, Bigg Boss announces that the ration task has been continued which excites the housemates.

However, in the first round, the three strikes happen as Anki Gupta's letter gets read.

Basket No.3 gets taken away while MC Stan gets emotional after hearing the letter from his parents which makes three strikes.

Basket No. 4 also gets taken away as Archana and Srijita laugh.

In the third round, Bigg Boss reads Shiv Thakare's letter while he tries to distract himself by talking about his journey in Bigg Boss Marathi to Archana and Sreejita.

In the end, the housemates get to keep Basket No. 5 while Shiv tries to hide his tears.

The housemates hope for a fair distribution from MC Stan while in reality, Stan gives most of the luxury items to Sajid Khan and Sumbul Touqeer Khan.

Soundarya fails to get her letter!

Soundarya's letter comes in the fourth round and because of others' reactions, three strikes happen.

Soundarya rushes after the bald man to get her letter but the man regrettably informs her that she cannot get the letter.

Soundarya gets emotional while Basket No. 6 gets taken away.

In the last round, Bigg Boss announces that since there is only one Basket left, only one letter will be read from either Priyanka or Archana.

Bigg Boss allows MC Stan to react and asks him whose letter should be read.

Stan selects Priyanka and Archana gets angry but she does not react during the task.

Archana gets upset as she says that only she didn't get to hear what her family had to say to her.

After the end of the task, MC Stan feels bad and reasons that he did it all for ration.

Archana argues that the strikes still happened and that the basket is being taken away while stating that no one cares about her.

She cries as she says that she is not Priyanka's friend and that she has only become an option for everyone including Bigg Boss.

Afterward, while everyone is eating, Bigg Boss calls out that the housemates talked about Archana being the reason for most of the strikes.

He calls her to the living couch and tells her that he is going to read the letter to her.

Archana shouts to the housemates that she told them she is not the reason for the strikes.

As Bigg Boss reads the letter to Archana, she cries feeling relieved to know that her family is not upset with her as she had a fight with her family before coming to the Bigg Boss show.

Later, Shiv, Stan, and Shalin compete in a task presented by Garnier.

Stan wins and gets a hamper as a gift while Sumbul gets upset with Sajid for calling her boring.

Shiv tries to cheer up Sumbul while Sajid tells Sumbul to not talk to him again and leaves from there.

On the other hand, Sreejita gossips with Shalin while they are cleaning the kitchen.