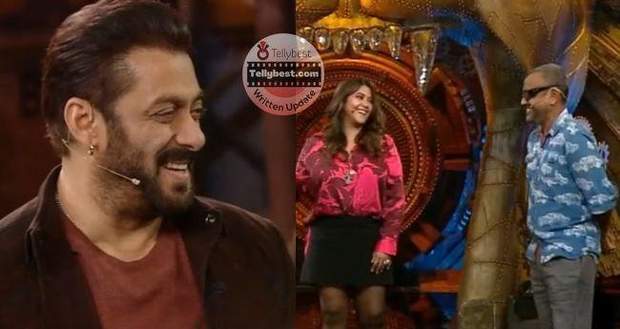 Today's Bigg Boss 16 22nd January 2023 episode (day 114) starts with Salman Khan greeting the contestants and telling them about one of the contestants getting eliminated today.

Salman shows Shiv Thakare and Sumbul Touqeer Khan dancing to the audience. He jokes about the housemates doing a lot of things except for talking about Soundarya's drama.

Salman talks to Shiv and tells him that he has started thinking that he is already in the top finalists since he is not putting in the effort.

He also states that MC Stan has been showing a lot of involvement after getting nominated for elimination while telling Shiv that he became silent.

Shiv says that he will take care of it while Salman tells the housemates to go to the garden.

The housemates get surprised to see the tree of 'Paap' (sins) with a lot of tags and Salman tells the housemates to tell which contestant fits the given word.

Archana Gautam states that Nimrit Kaur Ahluwalia is 'Laalchi' (greedy) since she does not want to play alone and stays in the Mandali.

Sumbul gives Tina Datta the tag of 'Dhong (Fake)' while Nimrit gives her the tag of 'Ghamandi(arrogant)'.

Tina gives the tag of 'Krodh (anger)' to Shalin while stating that everyone knows he has anger problems.

Shalin Bhanot makes himself the subject of mockery

Salman talks about Shalin's conversation with Bigg Boss and says that Bigg Boss is a mind game and in his eyes, Shalin is the weakest.

He advises Shalin to move on from past things while telling Priyanka Chahar Choudhary that he has something for her once she exits the show.

Afterward, Priyanka gives the tag of 'Irshya (jealousy/envy)' to Nimrit while Soundarya comes on the podium next.

She states that she considers herself as 'Bewakoof' while Salman reminds her that the astrologer has called her the smartest in the house.

Further, Soundarya gives the 'Aalsi (lazy)' to Shalin while he gives the 'Bewakoofi (stupidity)' tag to Priyanka.

Salman jokes about Shalin while Shalin wears the tag himself and sits in his place while Salman again jokes that it is suiting.

Later, Shalin tries to talk to Soundarya with the offer of being friends again but she refuses.

Archana tries to advise Soundarya but Shalin ignores her saying that he is talking to Soundarya only.

At the same time, Mandali talks about Shalin with Priyanka.

Ekta Kapoor on the stage of BB16

Afterward, Salman greets the housemates once again and talks about nominations for elimination while revealing that Sumbul is safe since she has gotten the most votes.

Salman asks the housemates whom they think will be eliminated from Soundarya, Shalin, and Tina.

Further, Salman tells the safe housemates (Shiv, Mc stan, Archana, Sumbul, Nimrit, and Priyanka) to think and give an answer when Bigg Boss asks them.

The housemates go into the captain's room and Archana cries while trying to convince them that Soundarya works on the tasks and is the most involved.

Shiv and Nimrit get into a minor argument while Priyanka convinces the housemates that Soundarya is the one based on the reasons for not being involved.

Bigg Boss calls all the housemates into the living area while Archana goes and hugs Soundarya.

Nimrit tries to hold back her tears while Archana hugs Soundarya.

Soundarya tries to lighten the situation by telling Archana that she won't talk to her if she wins.

The housemates bid Soundarya goodbye after which Archana and Priyanka talk to Tina.

At the same time, Shiv tries to comfort Sumbul and make her believe that they are friends with their own will.

Afterward, the housemates greet Ekta Kapoor and Dibaker Bannerjee who tells the housemates that they are there to find her next cast in her LSD's installment.

Most of the contestants consider Archana as the snake of the house closely followed by Shalin and Tina.

Ekta keeps on joking that the contestants look good with snakes while Shalin reminds her that he has already worked with her.

Tina takes the names of Shalin and Nimrit for snake while giving the snake to Shalin.

On the other hand, Tina gives a ladder to Priyanka while Shalin gives her a snake.

Shalin gives the ladder to Tina who keeps it back on the board.

Afterward, Ekta talks about her next installment based on the theme of love in modern digital life and tells the housemates to give their auditions.

Priyanka and Archana reenact a scene from Naagin 6 while Divaaker states that Priyanka looked more natural than Archana.

Meanwhile, Ekta informs him that Archana's character was acting in the scene which is why it might look a little unnatural.

Further, Tina and Sumbul give an intense scene from the show Uttaran while Shiv and Priyanka reenact a scene from Devdas with them being lovers.

MC Stan states that he cannot act while Ekta convinces him to act like Sumbul's father.

Afterward, Shalin does a scene from Dream Girl movie while Dibaker tells him that there is a difference between being a man and a woman.

Afterward, Ekta states that it is time for the result and takes Shalin's name.

He gets excited while Ekta tells him to guess whose name she might take.

Dibaker finally holds Nimrit's name and reveals that she is being cased for the second installment of LSD.

The cast of Naagin 7 from Bigg Boss 16

Ekta reveals that she also liked another girl whom she is going to cast in Naagin 7 but won't take her name since Naagin 6 is still going on.

Ekta and Dibaker bid the housemates goodbye while Archana and Priyanka talk about Salman telling Priyanka that he has something for her.

Archana says that she thinks it is for a film while Priyanka prays to God for it to be true.

The night engulfs half of the housemates in sleep while the ladies continue gossiping about Nimrit getting the role in LSD2.