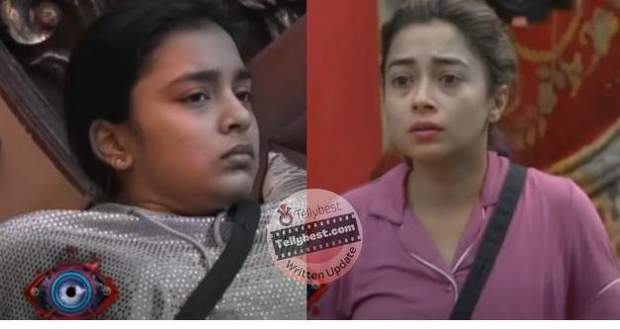 Today's Bigg Boss 16 22nd November 2022 episode (day 53) starts with the BB16 contestants waking up and singing the BB Anthem to start off their day.

Tina Datta sits with Shiv Thakare and tells him to convince Archana Gautam to clean the washroom and the remaining rooms in exchange for some ration.

Meanwhile, Archana tells Priyanka Chahar Choudhary and Soundarya Sharma that she is going to argue with Tina over her supposed hygiene drama.

Further, Archana starts arguing with Tina and complains about her to everyone including Sajid Khan while Tina goes after her trying to justify herself.

Archana does her trick by praising Sumbul Touqueer and telling Tina that Sumbul is more hardworking than her.

Tina gets jealous of Sumbul!

Tina gets angry at the mention of Sumbul while Archana goes to Priyanka and Soundarya laughing about Tina easily falling into her trap.

Later, Shalin Bhanot talks to Sumbul, saying that he, Sumbul, and Tina have the strongest bond in the BB House.

Sumbul tells Shalin that they are not the strongest bond in the Bigg Boss 16 House and finally expresses how bad she felt when Shalin and Tina came together and forgot about her.

When Shalin realizes that Sumbul is not getting manipulated, he turns the tables and tells Sumbul that Tina is getting blamed because of her.

At the same time, Archana and Priyanka keep on laughing at the drama that they have created inside the house.

Shalin comes to Tina and tells her that Sumbul does not consider her close and Tina says that she will make Sumbul's life a living hell from now on.

Sumbul goes to the garden while Priyanka and Archana fill her ears against Shalin and Tina.

On the other hand, Abdu Rozik keeps on getting aggressive over not getting the chocolates while he tries to butter up MC Stan and Shiv to give him the keys.

Tina tells Shalin that Sumbul is staring at them while Shalin compares her to Soundarya, further angering Tina.

Bigg Boss calls a meeting in the living room and tells the housemates about the new nomination task.

In each round, one participant from the king and his favorites (Shiv, Nimrit Kaur Ahluwalia, and Tina) will be called into the killing office while two contestants from the non-favorites will come and try to convince him to kill the other person with the bribe of food items.

In the first round, Shiv has to decide between Archana and Priyanka.

In the second round, Tina has to choose between Sajid and Ankit Gupta.

However, both of them bring useless items and Tina demands they bring something of value for her.

Both of them fail to convince Tina without any of their products when the sound of the end of the round is heard.

As a result, Tina saves Sajid while she puts Ankit into nominations.

For the third round, Nimrit Kaur Ahluwalia has to choose between Shalin and Sumbul.

Abdu goes to Nimrit and tries to pass time while Sajid and Sumbul try to find something to give to Nimrit.

Shalin brings the jacket that he had given to Sumbul while she brings his hairbrush.

They both say that they hate each other while Nimrit gets confused about whom to choose.

However, in the end, Nimrit saves Shalin and nominates Sumbul.

Sumbul dips her legs in the pool feeling upset.

For the last round, Shiv gets the chance to again choose since he is the king between Soundarya and Abdu.

However, once in the activity room, Shiv saves Abdu and puts nominates Soundarya Sharma.

At night, Shalin and Tina are having a moment together while Bigg Boss calls out to Tina and reminds her that she has left the stove gas on.

Tina apologizes to Bigg Boss while Shalin rushes to turn off the gas stove.

Further, Tina gets angry as she keeps on reminding Shalin how he compared her to Soundarya and Sumbul.

Shalin goes to Sumbul and tells her that he is upset she got into the elimination for nomination while Tina bitches about them to Priyanka and Soundarya.

Later, Sumbul is talking to Shiv sweetly while Abdu teases her by calling her 'Soundarya from London' and clapping his hands.

However, Soundarya also joins in the joke saying that it should be 'Soundarya from LA'.

At night, Soundarya and Priyanka are listening to Archana talk about her elections things while Bigg Boss calls out to her once again and tells her to stand in the living room.

Bigg Boss scolds her for talking to her about things and tells her that as punishment, she will have to go to all of the contestants and apologize to them that she cannot understand the simple Hindi language which Bigg Boss keeps reminding her to not talk about the outside matters.

Further, Archana goes about the house apologizing and Bigg Boss finally ends her punishment while Priyanka and Soundarya keep on laughing at her.

On the other hand, Shalin keeps on apologizing to Tina telling her that he goes not want to ruin their friendship over little things.

At the same time, Shiv and Archana get into an argument as Archana starts using abusive words.

Meanwhile, Abdu is still hung up on getting chocolates from the king's room and tells Nimrit that he will finish all of them in a day if he gets the chance.

Archana fights with Tina and Nimrit!

At night, while Archana and Soundarya are cleaning the kitchen, they get agitated by the smell of wet coriander kept by Tina.

Archana takes the garbage bag and goes to Tina and Nimrit's room where she leaves the bag there.

Nimrit and Tina get angry as they come out of the room and start arguing with her.

Shiv tries to calm Archana by telling her that even if she is right, she should have brought up the topic in the morning and in a correct manner.

© Copyright tellybest.com, 2022, 2023. All Rights Reserved. Unauthorized use and/or duplication of any material from tellybest.com without written permission is strictly prohibited.
Cached Saved on: Thursday 24th of November 2022 11:37:17 PMCached Disp on: Wednesday 7th of December 2022 03:06:10 PM