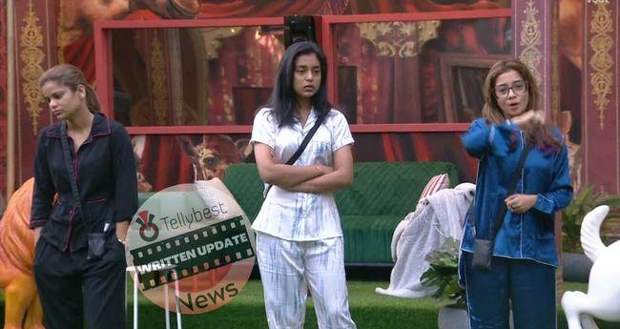 Today's Bigg Boss 16 22nd October 2022 episode (day 22 live) starts with the BB housemates waking up and singing the BB 16 Anthem with half-asleep expressions on their faces.

Meanwhile, Archana tries to stop them but gets angry after which she decides to not do anything as things are getting out of her control.

Gori keeps stealing fruits and other things from the captain's room and eats them in front of Archana who just sits with Priyanka Choudhary trying not to react.

However, Gori finally provokes Archana who hits her arm to push it away from her face.

Gori keeps complaining that Archana has hit her and warns Bigg Boss that she will break Archana's legs if she doesn't get any response from his side.

Archana gets worried saying that she won't stay silent anymore while Priyanka tells her that Bigg Boss will handle everything if Gori comes to hit her.

Archana fears for her face, Gori comes at her with a Dumbell

Gori keeps trying to scare and worry Archana by walking near her with Dumbell in her hand while Archana looks unafraid.

At the same time in the confession room, Karan Johar asks Bigg Boss if he can talk to the contestants in his own way.

Further, the housemates get greeted by Karan Johar who informs them that he will be taking over for some time since Salman Khan is unwell.

says that they might be expecting fireworks and celebration on the festival of Diwali but he is there to talk about the political game happening inside the house.

Priyanka reveals that many housemates started being rebellious after Archana became the captain.

Gori argues that Archana hit her while Karan tells her that she should have not stolen from the captain's room then.

Afterward, Karan confronts MC Stan and asks him what he would have done if someone was trying to steal his belongings.

Shiv tries to defend Gori but Karan smartly shuts him up asking all the contestants who think that Gori makes inappropriate gestures to provoke the housemates.

Further, Karan asks all the contestants to give votes if Gori's actions with the Dumbell were disrespectful and inappropriate with the intent to harm.

All the contestants except for Manya vote against Gori while Karan gives her time to decide if she wants to stay in the house or leave the show.

As soon as the screen goes black, chaos erupts in the house as everyone starts calling each other two-faced.

Sajid sits with Gori and tells her to apologize to Bigg Boss.

Afterward, Karan enters the BB House and asks Gori what she has decided first.

Gori smiles and apologizes to Bigg Boss while the housemates say that they do not have any objection to her staying in the house.

Shalin and Tina dance together!

Karan further makes the contestants sing his special anthem after which he makes Tina and Shalin Bhanot dance together and recreate a scene from the Kuch Kuch Hota Hai film.

Afterward, Karan tells Shalin that he become the hero from My name is Khan in front of Sumbul Touqueer.

Karan tries to make Priyanka and Ankit confess their love but Ankit says that he will not do it on camera and brushes away the topic.

Further, Archana rates the guys of the BB House and gives Shalin the most marks.

On the other hand, Karan tells Priyanka and Shalin to recreate the 'Channa Mereya' scene in the Ae Dil Hai Mushkil movie.

However, Ankit picks Priyanka in his arms in the middle of the performance and states that this one-sided love can turn into mutual love.

All the housemates do many different scenes and enjoy the evening such as Sajid doing the Pooja scene from one of his movies and Shalin-Gautam dancing to Dola Re while wearing sarees.

Afterward, Karan Johar brings MC Stan to the stage and asks him to select one person whom he thinks deeps to clean their dirt-filled mind.

MC Stan chooses Priyanka and she puts on goggles while saying that she knew he would take her name.

© Copyright tellybest.com, 2022, 2023. All Rights Reserved. Unauthorized use and/or duplication of any material from tellybest.com without written permission is strictly prohibited.
Cached Saved on: Monday 21st of November 2022 01:45:52 AMCached Disp on: Thursday 1st of December 2022 01:54:34 AM