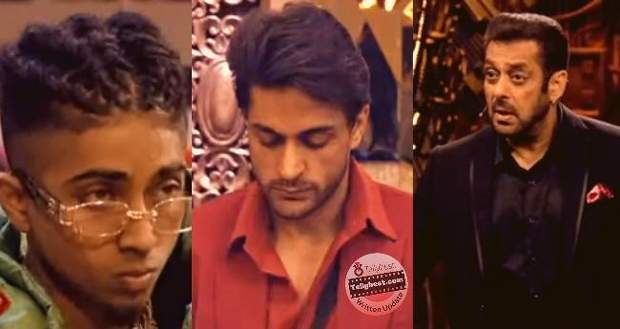 Today's Bigg Boss 16 23rd December 2022 episode (day 84) starts with Salman Khan greeting the audience while telling them that there will be more tension with the extension of the show.

Inside the house, Soundarya Sharma tells Ankit Gupta to do his duty while Shalin Bhanot interrupts and makes personal remarks.

Soundarya tells Shalin to not intervene and they both argue while Shalin starts cursing her and calls her illiterate.

Shalin starts talking to her disrespectfully and tells her that he is not her father's servant.

Sreejita De and Archana Gautam try to calm them while Shalin keeps on insulting Soundarya.

Late, the housemates enter the BB Salon and get shocked to see hairstylists and makeup artists for them.

The housemates get happy as they get new hairstyles and get ready.

The housemates see the guest couple in the BB Ki Tapri Stall and get happy as they rush to the garden to greet them.

Sajid Khan hugs the couple due to having a special friendship bond with them while he gets emotional and tells them that he missed them.

The guest couple brings breakfast and snacks for the housemates while making Soundarya excited as they reveal that they have also bought vegan tea and vegan snacks for her.

Afterward, Riteish talks about his moments with Sajid, and they both don the getup of females as they act like ladies and gossip about certain housemates while doing the situations that Genelia gives them.

The guest pair then has the contestants do a compatibility test.

Nimrit Kaur Ahluwalia and Shiv Thakare come first and get most of the questions right.

Afterward, Soundarya and Archana come next and both call Priyanka selfish while Shiv is the winner.

Housemates call out the Pagals in the BB House!

The couple asks if Soundarya is missing Gautam and they both say no saying that he has not done anything worth missing him for.

They both also say that Ankit should leave the show immediately.

The guest couple tells the housemates to call out one other contestant who is 'Pagal' and give them bitter shots to purify their 'Pagalpan' (craziness).

Archana calls out Vikas Manaktala while she herself gets called out two times at the start.

Ankit and Priyanka also call out Archana and make her drink the bitter shot instead of blowing air on her face as she suggested.

Shalin calls Soundarya and they again argue with each other while Shalin sarcastically calls her baby which she does not like.

MC Stan also calls Priyanka while Sajid calls out Shiv and tells him that he is crazy about winning the show and always comes to pray before going to sleep every night.

The guest couple leaves while the housemates go back to their random tasks.

Later, Tina Datta reveals to Priyanka and Ankit how Shalin dehumanized her and insulted her just because she was dancing in the tunnel.

At the same time, Sajid tells Soundarya that he thinks Shalin is fighting for footage.

However, Soundarya says that Shalin is making her a soft target today so that he can fully target her during the task the next day.

Salman Khan greets the housemates and gets right onto the drama as he tells MC Stan and Shalin to use the words they use to compliment the mothers and sisters.

Salman asks them who respects Bigg Boss and everyone raises their hands while Salman mocks them.

Salman further repeats the sentences that Shalin and Stan have used while cursing and tells them to fill out the blanks.

Further, Salman makes them use some alternative words and tells them to fight using the same sentences that they made up just now.

Salman further says that Tina is not done any changes ever since her return which she made claims and promises about while making Shalin realize that MC Stan was talking in his favor only.

Shalin argues that he will not curse again anymore while Salman says that it has become his daily drama.

Salman goes on to tell MC Stan that he was talking about fighting Shalin out of the house and mocks him saying that he has to keep his word and beat up Shalin once they get out of the BB House.

Salman goes on to tell Shalin to not talk much as he will reveal his steroids scandal if he talks too much.

Riteish reveals that his favorite is Shiv apart from Sajid while Genelia reveals that she likes Archana the most.

Afterward, Riteish reveals that Salman has also done a song for their new Marathi movie and gifts him three custom jackets that he made for him with the 'Being Bhau (Being Brother) Since 1986' tagline.

Salman makes the couple do a compatibility test and laughs at their matching humorous answers.

Wishing them a happy future together, Salman bids them goodbye after which Salman again greets the housemates.

Salman tells them that the results of the MyGlamm contest are here and shows a video from the brand ambassador Shraddha Kapoor.

Shraddha reveals that the winner will get a chance to be in an ad with her and 25 lakh rupees.

Priyanka is revealed as the winner while all the contestants get a hamper.

Further, Salman greets Priyanka and tells her that the others are not on her level and brings out a special chair for her while telling her that her name should be 'Pari-yanka'.