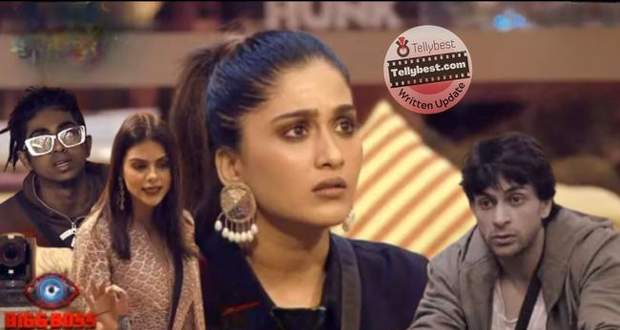 Today's Bigg Boss 16 23rd January 2023 episode (day 115) starts with the housemates waking up to the sirens and doing their daily routine of singing the BB Anthem.

Later, while making breakfast, Archana runs from the kitchen and goes to the resting area while shouting like a mad woman.

Tina Datta and Priyanka Chahar Choudhary rush to ask her what is wrong.

Archana Has A Lizard Phobia!

Archana reveals that there is a giant lizard and Priyanka and Tina scold her while Archana states she has a huge fear of them.

Further, Tina and Nimrit Kaur Ahluwalia fight over space in the powder room but talk it out afterward.

Sumbul Touqeer Khan asks Nimrit if Shalin Bhanot really has no one to talk to and Nimrit says yes.

Nimrit asks her if she's thinking to talk to him again, Sumbul refuses and says that she just wanted to know.

On the other hand, Priyanka and Tina tease Archana by saying that Shiv Thakare has started liking her.

Archana also joins in on the joke and Shiv tells her that he is glad for her fighting with him.

Archana tells him that she is grateful he gave her the credit which makes everyone laugh.

At night, Nimrit sits with Sumbul and advises her to start talking to other people too since it is inevitable now.

Nimrit tells her that she does not wanna be known as the topic of Shiv and MC Stan's laughter.

Elsewhere, Archana tells Tina what she wants Bigg Boss to tell her to speak in Hindi and starts talking in English to all the people.

Archana and Shiv joke around while Shalin interferes and tells her that she'll regret it when Shiv takes his next step.

Archana straightforwardly tells him that she is talking to Shiv only.

Shiv and Shalin go to sit with Stan while Shalin tries to brainwash them into thinking that Archana was talking cheaply.

On the other hand, Priyanka and Tina tell Archana that Shalin was trying to instigate her.

Archana goes to Shalin and argues with him while Shiv and Stan think that Archana is trying to get footage.

The next morning, Tina keeps on pacing the garden as she requests Stan to get Shalin out of the smoking area.

However, Shalin refuses to move from the smoking area.

On the other hand, Shalin instigates Shiv and Stan against Nimrit while stating that Archana is trying to enter the Mandali through Nimrit.

Later, Archana thinks of Shayri and goes to tell everyone about it while Shalin compliments her mockingly.

However, Priyanka stands up for Archana and starts fighting with Shalin while he keeps on talking about Archana disrespecting Shiv by telling him to talk to her in English.

Priyanka mocks Shalin and states that he is trying to be a nice guy by talking to Shiv and Shalin.

Shalin goes to Nirmit and tells her that Archana and Priyanka were eve-teasings him but thinks that it is okay because he is a man.

Shiv and Stan talk to each other and agree that they are talking to Shalin for the sake of sanity since it is impossible to stay alone inside the Bigg Boss house.

Shalin cries to Stan and Shiv and requests them to vote for him in nomination for elimination since he doesn't wanna be labeled as a "wannabe Mandali person".

Later, Shalin is talking to himself in the room crying that he is not talking ill about Tina since he knows a girl needs to maintain their dignity and has to get married outside.

Nimrit tells him that her only advice to him would be to speak up when he doesn't like something and stand his ground.

Later, Shalin sits with Stan and MC and jokes around Archana playing with Maahim while Priyanka thinks that she has said too much to Shalin.

However, Tina tells her that she didn't say anything that wasn't needed.

Afterward, Tina and Nimrit again get into an argument over Tina's spoiled attitude and her refusal to clean up Maahim's mess.

Later, Shiv talks with Nimrit and tells her that MC Stan is upset with her which Nimrit says that she realizes too.

She asks Shiv how she should apologize to Stan and Shiv says that she should just talk to him.

Nimrit goes and apologizes to Stan while he tells her that it is okay.

Later, Priyanka, Archana, and Tina talk about the most nominated contestants while Shiv asks Shalin what the doctor told him.

Shalin smiles as he states that the doctor told him to talk to the people he likes and just do things that he likes.

Elsewhere, Tina walks with Priyanka and tells her to be prepared since she might leave for a medical emergency.

Priyanka asks her what is the reason while Tina takes her to the powder room and shows her teeth which are coming undone.

Priyanka gets shocked seeing the damage while Tina reveals that her teeth have been clattering for the past week leading up to this.

Tina requests the Bigg Boss to call her into the medical room while packing her bags.

Later, Bigg Boss calls Tina into the bathroom area and tells other contestants not to go inside with her.

The housemates think that she is just doing drama while the curtains to the bathroom area close making them even more curious.

However, after some time, Tina comes back outside and hugs Priyanka.

© Copyright tellybest.com, 2022, 2023. All Rights Reserved. Unauthorized use and/or duplication of any material from tellybest.com without written permission is strictly prohibited.
Cached Saved on: Wednesday 25th of January 2023 11:56:37 PMCached Disp on: Wednesday 1st of February 2023 06:54:11 PM