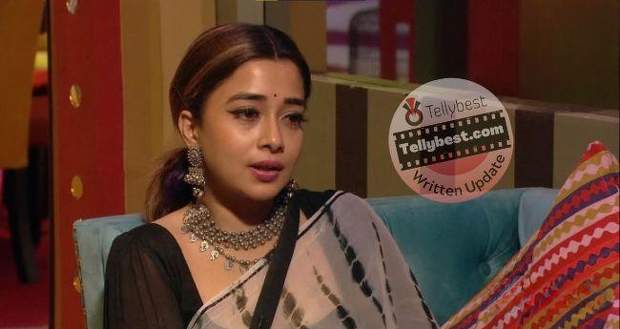 Today's Bigg Boss 16 23rd November 2022 episode (day 54) starts with Sajid Khan sitting with others and telling them that he will bear everything but cannot bear to hear anything against his parents.

#PriyAnkit get upset with each other

Meanwhile, in the garden, Ankit Gupta brings coffee for Priyanka Chaudhary while she tells him that it is the first time he has brought coffee for her.

However, Archana Gautam and Ankit team up as they tease Priyanka but end up making her upset.

Later, Priyanka goes to sit next to Ankit and tells him that his words have hurt her while she has always stood up for him.

He tries to explain to her that they were just joking but she gets emotional and leaves to take a walk.

Back inside the kitchen, Abdu Rozik keeps on telling the Royal Cooks to make breakfast speedily as he is dying of hunger.

Meanwhile, Priyanka tells Ankit that she has always fought his fights too while he tells her that he has never told her to fight for him.

Priyanka starts crying while Ankit looks away from her saying that he was just joking and will never joke with her from now on.

Ankit tells her that she will have to bear him for two more days only while she leaves from there telling him that he made her realize she means nothing to him.

She goes on to say that he should be clear if he wants her as a friend or not as she cannot figure that out too.

Afterward, Bigg Boss tells the housemates about the ration task in which Shiv Thakare will be the one driving the open truck while the rest of the contestants will be in the back waiting to reach the market where the ration is kept.

One room will get out to get the ration in each round while the time will end with Shiv honking the horn.

After three rounds, Archana argues with Nimrit Kaur Ahluwalia and Tina Datta while Sajid gets aggravated by her.

As the task ends, Archana keeps on aggravating Sajid and talks about his father which makes Sajid angry.

Sajid stands up angrily while Archana acts like getting hurt.

The housemates try to separate the two while Sajid starts cursing at her saying that she's using the women's card to her advantage.

Sajid bangs on the door angrily as his friends take him to the garden area.

Meanwhile, Soundarya Sharma and Priyanka keep on arguing with Archana telling her that she is wrong.

Sajid refuses to do the task and leaves while Archana talks about being roadside people.

However, Tina takes it personally and argues with Archana.

Priyanka goes to Archana and tries to explain to her that she was wrong while Archana keeps on saying that she did nothing wrong.

On the other hand, Nimrit keeps on trying to persuade Sajid to continue the task but he refuses.

Bigg Boss calls Sajid into the checkup room while Sajid tries to tell the doctor that his whole body is getting affected mentally due to Archana.

Archana taunts Soundarya and Priyanka while they both tell her to leave the room.

However, Archana again turns herself into a victim and tells her that her friends have abandoned her in times of need.

Meanwhile, Nimrit and Tina tell Bigg Boss that Sajid has not eaten anything in the morning.

However, Sajid says that he will not eat anything until any action is taken against Archana.

Later, Sajid smokes as he tells Shiv and MC Stan how he had gone around in rickshaws at the age of 14 telling his relatives that his father had died.

Sajid tells them that it was Salman Khan's father, Salim Khan, who had helped them out when his father died and no one was supporting him and his mother.

Soundarya goes to Archana and apologizes to her while she feeds her and vents out.

Sajid requests Bigg Boss to call him into the confession room for at least a second.

Soundarya comes to Sajid and tells him that she does not support what Archana did.

At the same time, Shiv and Nimrit get called into the confession room where Bigg Boss ask them if they support Sajid's protest of not eating.

Both Nimrit and Shiv say that they do not support the protest and Bigg Boss tells them to inform Sajid that this kind of protest is not allowed and that things like this have happened before.

They both thank Bigg Boss and go outside to tell Sajid what Bigg Boss has informed him.

At midnight, Sajid gets a delightful birthday greeting from his friend group.

At the same time, Soundarya tries to patch things up between Priyanka and Ankit by making them talk and leaving afterward.

However, Priyanka again gets hurt by Ankit's words and tells him to leave her alone.

After some time, Ankit tells Priyanka to sleep in the bedroom and picks her up in his arms while she giggles telling him to put her down so she can walk herself.

© Copyright tellybest.com, 2022, 2023. All Rights Reserved. Unauthorized use and/or duplication of any material from tellybest.com without written permission is strictly prohibited.
Cached Saved on: Friday 25th of November 2022 11:57:17 PMCached Disp on: Thursday 1st of December 2022 02:30:51 AM