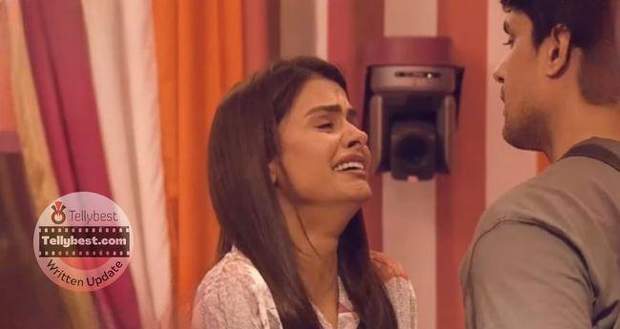 Today's Bigg Boss 16 24th December 2022 episode (day 85) starts with Salman Khan greeting the audience and telling them to not worry as there will still be elimination even if there was no voting.

Further, the crew brings out three buzzers on the set and the housemates see Salman talking to each buzzer and how it affected the BB House and the prize money.

Salman mocks Priyanka Chahar Choudhary as he tells her that she is an angel and should be called 'Pari-yanka'.

Salman makes Priyanka sit on the throne put in the centre of the two couches where the contestants she hates are seated on one side and the one where the so-called 'Individuals' are seated who are her friends.

Priyanka tries to act like she's not done anything wrong while Salman asks the housemates if they think Priyanka is a big mouth and small work.

All the housemates agree that Priyanka cannot do anything she stands by while Salman stops her from interrupting others' work.

Salman further states that it is Priyanka's nature and asks her why she questioned Sajid Khan for pressing the buzzer to save Sumbul Touqeer Khan and did not object when Shalin Bhanot pressed the buzzer for Tina Datta.

Salman Khan mocks her and sarcastically says that the housemates praise her as she is a 'Mahan Devi'.

Salman tells Priyanka to not talk too much as he tells her nicely and can also be strict.

He asks Priyanka how her saving Ankit Gupta and not bringing back the 25 lakhs is better than other people's decision to save their liked contestants.

Salman tries to explain to Priyanka that her justification is wrong but she keeps on standing on her words saying that she is right.

Sajid tells Priyanka that she has no right to judge his friendship with Sumbul.

Salman frankly asks Priyanka if she has any friends besides Ankit and she takes Shalin's name.

Afterward, Salman asks the housemates what quality should have been removed for them to be Priyanka's friends.

All the housemates collectively say that Priyanka's arrogance and non-receptiveness is the only thing keeping them from being friends with her.

Salman tells Priyanka to work on her friendships while he will come back in some time.

As the screen goes blank, Priyanka hugs Ankit saying that she did not say anything wrong for him while Soundarya Sharma and Archana Gautam say that they were always right.

On the other hand, Sajid tells Archana that she is also a little bit like Priyanka in the way that she tells others about her work and ruins her image.

Meanwhile, on the set, Salman tells the viewers about the MyGlamm Queen contestant when Manish Paul comes there and wishes him a happy birthday.

Manish asks Salman about some rumors like him burning his father's money and eating almost 30 Rotis.

Salman reveals that the rumors are true and gives humorous stories behind the rumors.

Afterward, Manish and Salman dance together to old moves from Salman's movies.

Manish brings PARTY with him to BB House!

Manish and Salman greet the housemates who all get excited seeing him.

Manish reveals that the housemates have a surprise for him as the celebration of Salman's birthday has already begun.

Tina Datta, Soundarya, and Sumbul give a performance after which Ankit and Priyanka give couple performance.

Archana, Shalin, and Vikkas Manaktala come on the stage next as their comedic performance make everyone laugh.

Lastly, Sreejita De, Nimrit Kaur Ahluwalia, and Shiv give a performance that ends with a group performance.

Manish makes the male customers sit on the waking chair and asks questions to female housemates.

Every 'yes' will get the male contestant one more wax strip.

Stan comes first and Archana does his waxing while Sajid comes next and gets his legs waxed with a humorous story.

Shiv sits on the chair next and Soundarya does his waxing with a lot of enjoyment.

Shalin gets waxed next and he tries to hide his pain while others laugh.

Salman tells the viewers that he will not be the one to eliminate the contestant this week as Bigg Boss will be the one handling it.

Salman Khan bids goodbye while the housemates inside gossip about each other.

Nimrit and Soundarya congratulate all the housemates for staying inside the game till now.

Afterward, Bigg Boss tells the housemates that eliminations will still happen this week and reveals that one contestant from Tina, Ankit, Vikas, and Sreejtita will surely be eliminated.

Bigg Boss tells the housemates that he gives this decision to them and tells them they will have to give a decision on who is the most unwanted in the house and has failed to make their stamp in the viewer's hearts.

Most of the housemates take Ankit's name and Bigg Boss announces that he is nominated for the show.

Sajid says that he knew it would happen ever since the buzzer task while Archana and MC Stan reveal that they are happy.

Ankit and Priyanka hug each other while she asks him why he didn't get eliminated in public eliminations.

Priyanka sobs saying that she is not even prepared while Ankit tries to comfort her.

© Copyright tellybest.com, 2022, 2023. All Rights Reserved. Unauthorized use and/or duplication of any material from tellybest.com without written permission is strictly prohibited.
Cached Saved on: Wednesday 25th of January 2023 09:05:29 AMCached Disp on: Monday 6th of February 2023 05:32:54 AM