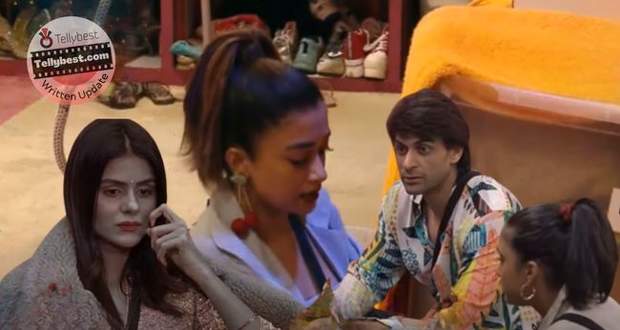 Today's Bigg Boss 16 24th January 2023 episode (day 117) starts with Bigg Boss reminding the contestants of their school days, specifically the result day when they used to get the report cards.

Archana Gautam comments to Bigg Boss that he is putting everything on their shoulder when Bigg Boss tells them that they will the if Nimrit Ahluwalia will go to the Finale or not.

To decide Bigg Boss gives a task to all the contestants they will have to remove 10 rings from 30 rings from Nimrit's report card.

At last, if the number of rings on the report card is less than 20 then Nimrit loses the chance to win the Ticket To Finale.

Bigg Boss takes the initiative by removing 1st ring by stating the reason that Nimrit speaks English a lot despite being told many times.

Tina Dutta starts by stating the reason that many of the 'Cookdu' sounds have been heard as the contestants slept during the daytime.

However, the Mandali doesn't accept the reason for which Tina says that if they don't want to do the task just let others know.

At this Shiv Thakare and Mandali members get angry and oppose her.

Priyanka Chahar Choudhary stands up and removes one ring but the Mandali stops her saying that the majority is not agreeing and thus she cannot remove the ring.

Task goes backend in the fight of Shiv and Priyanka

The argument turns heated as one side wants to remove the ring while the other doesn't want to.

During the argument, Shiv and Priyanka get personal, and MC Stan threatens Priyanka that he will reveal all the truth about her.

Priyanka gets provoked and challenges them to state the truth whatever it is.

Stan turns back on his words asking when did he say something like that.

Meanwhile, Archana states a reason that the bathroom was not cleaned which Shiv accepted and let her remove 1 ring.

Bigg Boss stops the fight saying that they are busy analyzing each other's game and don't seem interested in the task.

Thus, Bigg Boss ends the task by announcing that Nimrit is still in the Ticket To Finale race and will remain the captain of the house.

Tina and Priyanka sit together in the garden area together and discuss how they made the task dirty.

They discuss that the Mandali won't let Nimrit lose and this is how the game will continue one-sided.

Meanwhile, Shiv gets hyper and Priyanka comes back there as she gets provoked.

Interruptions in the conversation

Priyanka talks to Shiv while Nimrit keeps speaking in between them and Priyanka gets irked by that, thus asking Shiv to come to the side to talk calmly.

Shiv and Priyanka talk in the garden area and the other Mandali members also come there.

MC Stan and Nimrit keep interrupting their conversation and Priyanka tells Shiv to either talk himself or let others speak to her.

MC Stan gets offended and shouts at Shiv to not ask him to get involved and warns everyone to not reason in the nomination that he is not involved.

Further, the Mandali is sitting together and gossiping about Shalin being the snake who has spoken ill about every person in the house.

Later on, Tina asks Bigg Boss to send chicken soup for her as she has pain in her teeth due to which she cannot bite anything.

Bigg Boss calls Archana and Priyanka into the confession room and teases them that they are so scaring women in the house.

Bigg Boss is having fun with Archana and Priyanka

Both the girls laugh while Bigg Boss continues that in the house they have a "Sakhi" who is having trouble eating and has demanded chicken soup from him.

Archana thinks it is about Shalin after which Priyanka corrects her that it is about Tina.

Bigg Boss tells them to make soup for Tina and do a little fun while Priyanka asks him to send the chicken since Tina is not sharing any groceries with Shalin.

However, Bigg Boss tells them to take chicken from Shalin while Archana jokes with him about the recipe.

Further, Priyanka goes to inform Shalin that she is taking two chicken pieces from his ration as asked by Bigg Boss for Tina.

Shalin taunts in a saint voice after she leaves that in the time of need, she becomes so polite and when there is no need she is ready to eat him.

While sitting with the Mandali, Shalin feeds them the story of Priyanka asking for chicken for Tina while adding his expressions and sarcasm to it.

Mandali gossips about Tina and how she told yesterday that she will not accept even the poison from Shalin and today instantly took the chicken.

Meanwhile, Tina tells Priyanka that now everyone will be talking badly about her but Priyanka says that Bigg Boss had asked so they can use it to taunt others in the argument if they bring up the topic.

Later in the night, Nimrit asks Tina who did not eat their rotis and it comes out that Priyanka's rotis are left which she did not ask for, and were cooked due to miscommunication.

Archana drags the topic while Tina taunts her that it is not a big topic but Archana is making it one.

The conversation converts into an argument slowly which turns into a fight while Mandali makes fun of Shalin who is standing in their room and asks them if they can hear their noises.

Shiv and others say they cannot hear anything and laugh when Shalin checks his ears.

The next day in the morning, Tina and Priyanka wake up early and sit in the garden area to talk.

Shalin who is going there changes his route to avoid them and thus later goes up on the terrace.

He wishes good morning India and mentions some positive lines which showcase he wants to have a fresh start.

Everyone gathers for the BB anthem when the siren goes off.

After the anthem, Priyanka exercises near the gym area while Tina sits on the sofa and Archana on the terrace.

Tina calls Archana to come down but Archana refuses with a taunt.

Meanwhile, MC Stan comments if these ladies don't have any work to which Nimrit replies that they are doing that only.

Later on, all the contestants get ready for the day and nomination task.

Archana comes to Nimrit excitedly and recites her the Shyri (short poem) that she has written for Bigg Boss.

She recites one more on Shalin which translates to Shalin making it to the current nomination on the shoulders of Tina and Priyanka and now both are not there, he is using Shiv's back to cover the further journey.

Nimrit makes a face hearing the second Shyri and says she liked the first one.