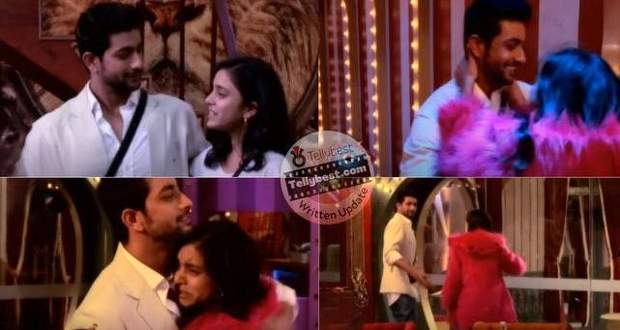 However, Tina feels Nimrit gets aggressive so Shalin asks Tina to hug Nimrit.

Sajid tells MC Stan that people are fighting about being the Bigg Boss 16 captain first thing in the morning while Shalin goes to Nimrit who rants about Tina's pressing attitude and putting terms & conditions to everything.

Meanwhile, Priyanka Chahar Chaudhary and Ankit Gupta wish that one of them from their group is the 'sanchalak' or referee of the upcoming captaincy task.

Later, Tina tells Nimrit that she has been snappy for a long time while Nimrit says she reacts only after she feels the pressure pile up on her shoulder.

Ankit talks about open voting and Sajid pipes in, stating he has been associated with every possible Hindi TV channel and has the assurance that he will be saved.

Bigg Boss 16 then gathers all the housemates and roasts them about their weird relationships.

Bigg Boss then shows all the housemates the audio and video of Sumbul talking to her father.

Shalin gets astonished once he hears how Sumbul's father refers to him as "Kamina" along with Tina.

Sumbul stays quiet and gets tears in her eyes while Bigg Boss scolds her, stating Sumbul's father who has made this call as an emergency took advantage of their rules.

Shalin gets angry and kicks the table while Sumbul gets nervous.

All the housemates try to stop Shalin from charging against Sumbul who has started hyperventilating.

Shiv Thakare & Priyanka try to tell Sumbul that her father's words are not wrong but they are wrong for Shalin & Tina.

Shalin screams at Sumbul, asking her why she comes to talk to them when her father says this.

He scolds her for dancing with him in the morning but Sumbul reasons, she is stuck with him & Tina as they are in the same room.

Tina tries to punch a wall but Shalin stops her.

She gets a headache, and thanks Bigg Boss for showing them the audio since Sumbul & her father are trying to character assassinate her.

Sumbul gets an attack

Shiv tries to comfort a hyperventilating Sumbul who is then called into the medical room.

Shalin & Tina both try to calm themselves down but Tina snaps at him, saying her character portrayal is very important since she is also someone's daughter.

Later, Tina comes to talk to Sumbul in front of Sajid, Shiv, and Stan while Priyanka, Archana, & Soundarya feel bad for a crying Sumbul.

Tina tells Sumbul clearly that she is not a part of all this while Shalin questions Sumbul when her father's call came since they both shared a bed.

Tina pipes in again, shouting that she did not tell Sumbul & Shalin to share a bed.

Shalin when questioned about the same tries to shrug off the topic and refers to Sumbul as a child and as her daughter.

Later, Bigg Boss introduces a new task where the King's favorite team has to compete with the non-favorite team.

The task's name is BB Fisheries where three members from each team have to collect the fish (fake) coming out of the pipe set up in the garden, mix it with salt & rice, and then press the buzzer.

The team who finishes first will have their members' photos stuck on a board and those contestants will be the next week's potential King & Queen.

MC Stan has to play the role of a "Sanchalak" because he is already nominated.

In the first round, Nimrit snatches all the fish collected by Soundarya.

In the second round, only three members are allowed from each team but Archana messes up her team's game by stepping on the elevation.

Priyanka gets agitated by Archana as Stan reveals that King's non-favorite team did cheating upon Sajid's suggestion.

After the task is over, Shiv tries to instigate Archana, stating that she is the reason why her team lost.

However, Archana is not scared of anyone and says that since the sanchalak is biased, that is why the other team won.

Archana mentions all of them as Sajid's Chamche while Sajid angrily charges at her.

Stan & Shiv stop him from lashing out but Stan says if Archana wasn't a girl, he would slap her with slippers.

Sumbul supports Sajid out of the blue and screams at Archana for misbehaving while Archana says Sumbul shouldn't speak since she already feels pity for her.

In the end, Shiv lightens up the situation and translates Archana's infamous "Bhaunk!" (bark) with "I miss you, baby!".

© Copyright tellybest.com, 2022, 2023. All Rights Reserved. Unauthorized use and/or duplication of any material from tellybest.com without written permission is strictly prohibited.
Cached Saved on: Saturday 26th of November 2022 11:30:27 PMCached Disp on: Tuesday 6th of December 2022 01:55:43 PM