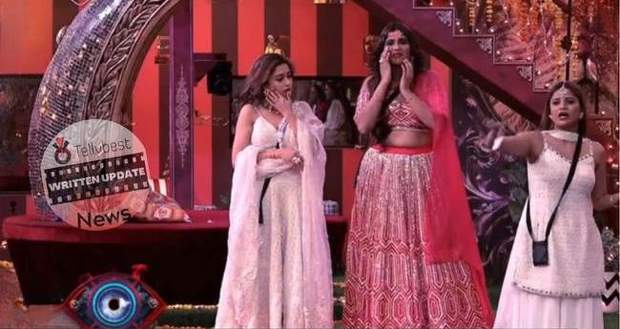 Today's Bigg Boss 16 24th October 2022 episode (day 24) starts with Shekhar Suman telling the audience that he is eager to watch how the contestants are playing with Karan Johar's relationship advice.

Further, Shekhar greets the housemates and welcomes them once again for the Big Bulletin with the Shekhar Suman segment.

The contestants greet him happily while Suman talks about the history of Diwali and asks them if they know the meaning of Maryada (respect).

However, Shekhar himself answers the question and says that he forgot he was talking to the housemates of the Bigg Boss house.

Shekhar keeps interacting with all the contestants and teases them with his unique comedy/poetry.

Even after that, Shekhar keeps the fun going by telling the boys that they are gossipers even after having so many girls in the house.

BB16 House Contestants Give Each Other Diwali Gifts

Gori Nagori gives the tongue cleaner to Archana Gautam, and Gautam Vig gives a dustbin to Priyanka Choudhary to get rid of the dirty thought in her mind.

Further, Priyanka gives Shiv Thakare a mirror so that he looks at himself and realizes how wrong he is while Shiv gives a mask to Shalin Bhanot telling him to uncover his true self.

Ankit Gupta gifts himself a horn to speak up more while Archana gives a Brinjal (an indicator for a person who flips sides a lot) to Manya Singh.

Shekhar bids goodbye to the housemates while Karan Johar makes his entry and informs the contestants that Manya is evicted.

The housemates bid goodbye to Manya after which Karan tells the contestants to choose who is the 'Fuski Bomb' (weaker/fake) contestant between Nimrit Kaur Ahluwalia and Tina Datta.

Tina Dutta is a "Phooski Bomb"

Initially, most of the contestants say that Nimrit is the fake one but Tina gets the most votes and gets the title of 'Fuski Bomb'.

Karan addresses Abdu Rozik afterward and wishes him a Happy Diwali while showing him clips of the viewers wishing him a happy Diwali.

Karan further gifts a lounge chair to Abdu from India and says that they will have to celebrate the first Diwali of Abdu in India.

Surprising the contestants, Karan reveals that they have also gotten gifts but will have to earn them by entertaining both the audience and Abdu.

All the contestants dance and give unique performances for Abdu who gives them all thumbs up.

Finally, the contestants get to see their gifts and get emotional as they see the things their family members have sent for them.

Abdul gets another gift as he and the rest of the contestants get food from Kazakhstan.

Even after all of the happiness, Soundarya Sharma and Gautam keep arguing while trying to sort out what happened during the confrontation with Karan Johan.

Sajid Khan comes there and tells them to not take it too seriously as it's not a big deal.

Meanwhile, Archana talks to Nimrit and tells her that she's looking weaker day by day ever since she stepped down from the captain's throne.

Afterward, the contestants learn that Priyanka is at the top of the MyGlamm award to win 25 lakhs and a chance to do the ad with Shraddha Kapoor.

At night, Archana talks to both Gautam and Soundarya about their relationship looking fake, and brings up the conversation where Gautam was joking about kissing the wildcard contestant to make Soundarya jealous.

Archana also says that Gautam used to like her and hit on her before but since she has called her brother, Gautam has backed off and gone after Soundarya.

However, Gautam defends himself and says that he has never hit on Archana before but she refuses to believe him.

Further, into the night, Soundarya and Gautam sit on the sofa in the living room and talk while she tells him that she is upset with him.

Gautam asks her what's the problem while Soundarya reveals that even after she was humiliated in front of the whole national television.

He did not comfort her or hug her and instead went to hug Manya before she left kneeling she's the one who spread rumors about him.

© Copyright tellybest.com, 2022, 2023. All Rights Reserved. Unauthorized use and/or duplication of any material from tellybest.com without written permission is strictly prohibited.
Cached Saved on: Monday 21st of November 2022 05:43:53 AMCached Disp on: Monday 5th of December 2022 12:54:10 AM