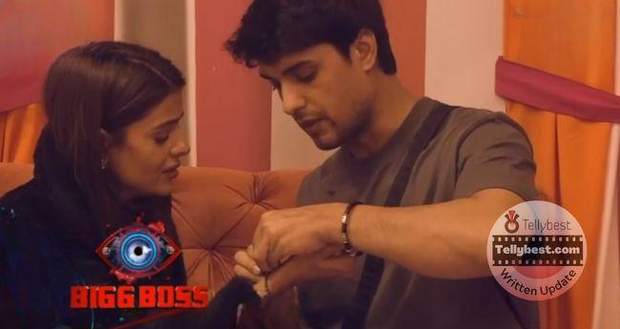 Today's Bigg Boss 16 25th December 2022 episode (day 86) starts with Ankit Gupta hugging Priyanka Chahar Choudhary & telling her to not be weak and stating that he has to leave.

Priyanka says that she is strong but she does not want to be without him.

On the other hand, Sajid Khan argues that he heard Bigg Boss say "last 24 hours" while Bigg Boss announces that he said, "imagine 24 hours".

Meanwhile, Priyanka keeps on crying while Shalin Bhanot comes there and gives her a jacket and a water bottle telling her to calm down.

Ankit asks her why she's getting so affected while she requests him to go after eating dinner with her.

Archana Gautam dances near the kitchen area out of happiness while Ankit calms Priyanka.

Bigg Boss again tells Ankit to bid his goodbyes to the housemates and get out immediately.

Elsewhere, Archana tells Tina Datta that maybe Priyanka's negative aspects will become positive after Ankit leaves and her true game might come out.

Sajid and others tell Archana to be not so heartless while Priyanka takes Ankit's bracelet from him telling him that she will keep it as a memory.

He asks her why she wants to remember him and gets emotional while she gets angry and tells him that it could have given her strength.

They both banter while she again hugs her while Vikkas Gupta comes there to bid Ankit goodbye.

Ankit tells Priyanka to not cry while he is not there while she laughs and says that no one else can make her cry.

Further, Ankit tries to keep it light as he bids the housemates goodbye.

Archana hugs Priyanka telling her that her game will start tomorrow while Priyanka is still upset with her.

Later, Priyanka, Tina Datta, and Shalin sit together and talk about how they should have been friends much earlier.

At night, Sreejita De and Soundarya Sharma talk about how Priyanka smartly took Vikas' name instead of Tina's so that she could keep her and Shalin as her friends.

On the other hand, Vikas tells Priyanka and Tina that Sajid and his team had talked about eliminating Ankit as a joke and later stayed on that decision which led to Ankit's elimination.

A new start in BB House!

The next morning starts with all the housemates waking up to the siren as they go to the garden area and sing the BB Anthem.

Further, Sreejita and Vikas argue with each other while Tina tells MC Stan about Shalin's 'attack' on her in the bathroom area.

Later, Shalin tells Tina that the others took her part of the Chicken and she goes to argue with Sumbul Touqeer about it.

At night, Sajid, Shiv, and Stan tease Sumbul by saying that she has kept Fahmaan Khan's clothes and has feelings for him.

However, Sumbul denies it saying that she has a brother-like bond with Fahmaan.

Tina says that she cannot make breakfast as she is sick while Archana and others argue that they will also not work.

Meanwhile, Soundarya sits with Archana and talks about how Shalin is disrespectful.

Further, Nimrit sees Shalin asking Sumbul to make his chicken, and she agrees.

Nirmit tells about it to Sajid and tells him that he should not stop Sumbul from talking to Shalin and let her do anything she wants from now on.

Shekhar jokes that Nimrit has made the BB House her house and asks her whom the participants remind her off from her family members.

Sajid jokes that he thinks Archana and Shiv will become best friends after exiting the house and will pursue a relationship.

Shekhar finally bids the housemates goodbye and tells them that he will meet them the next day.

At night, Vikas and Tina make fun of Shalin while he sulks.

Later, Archana and Vikas talk about Sajid and Shiv while Vikas reveals to her that Shiv had also a bit someone when he was in BB Marathi.

Archana questions Shiv about it afterward while he explains to her the whole reasoning behind it.

Bigg Boss further questions Vikas about BB Marathi and he reveals that he does not know anything.

Bigg Boss tells Archana to not believe half-given information while she apologizes to Shiv for questioning him.

Afterward, Abdu Rozik returns to the BB House and the housemates get excited while Sajid and Nimrit tell each other that they think Abdu's team told him to stay away from them.

Further, Sajid and Nimrit go to Abdu who is talking to Shiv and Stan about Ankit's ex, and confront him about his changed behavior.

Shiv later talks to Nimrit and Sajid and tells them that he also felt about Abdu's distance from Nimrit but not about Sajid.

However, Sajid argues that he saw it in Abdu's eyes and again confronts him while he states that nothing like that is happening.

Afterward, Tina talks about the treat from the Licious and reveals that it is for the ladies only.

At night, Nimrit talks to Sreejita about Abdu's cold behavior while Sreejita explains to her that Abdu might have a realization about his crush becoming too much and he could be trying to keep his distance.