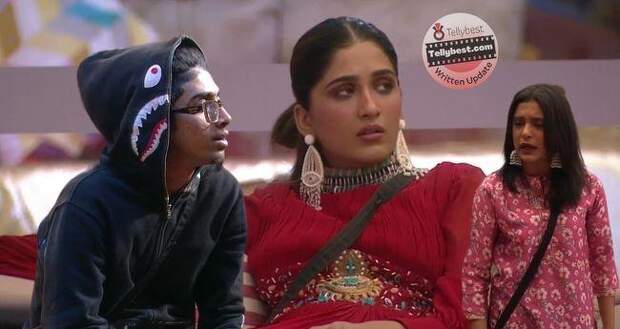 BB16 informs the contestants that there are two crows who are trying to suck blood but cannot.

So, the contestants have to dump two dummy stones and nominate two people. Since Nimrit Kaur Ahluwalia has won the Ticket to Finale so nobody can nominate her.

Nimrit and Priyanka get into a feud as they both pinpoint to each other who is right or who is wrong.

Shalin Bhanot gets anxious due to all the screaming and goes outside the activity room but Nimrit brings him back. Shalin nominates Tina and Priyanka.

Archana Gautam laughs at seeing Shalin sit in a corner and pokes fun at him. Archana nominates Shiv Thakare and Shalin Bhanot.

Tina nominates Shalin and Shiv while Shalin closes her ears.

MC Stan gets called and he takes Archana and Tina's names for nomination.

She then nominates Priyanka as she thinks Pri has a problem with her tongue.

Hence, the nominated contestants of the week are Tina, Priyanka, Shalin, and Shiv.

Tina says Shiv didn't say "Yes!" like Shalin so it seems like he's scared of eviction and she then pokes fun at Shalin's depressive mood.

Priyanka and Sumbul Get Into A Fight

Later, Shalin goes to Nimrit and says when he talked about a woman's character but Nimrit just laughs and says he must have plenty of times.

Shiv gets heated up since Priyanka & Tina are making fun of Shalin's sadness while Tina & Priyanka sits alone in the garden area.

Priyanka tells Tina that she is strong and not like Shalin who is playing the sympathy card.

Sumbul starts her drama of being targeted by Priyanka and says she might just slap somebody and won't make rotis for her. Shiv, Stan, & Nimrit consoles Sumbul.

Sumbul sits on the sofa and says she was the one who came to hug Priyanka when she was sad.

Priyanka passes by Sumbul and reminds her also when she was targeted in the whole house, Pri also came to her.

Shalin Is Made Fun Of!

Archana is happy to see the drama and talks to the cameras in the kitchen.

In the garden, Tina states to Priyanka that Shalin is very vindictive and not a good person and Salman Khan is absolutely right about Shalin's revenge-seeking nature.

While swiping the floor, Shiv says that everyone should try to be a good person while Archana says he should learn it fast.

Inside the bathroom, Shalin emerges out of the shower while Nimrit, Sumbul, & Shiv are discussing Tina & Priyanka.

Shalin says he is a fan of what Sumbul did in the activity room.

Meanwhile, Pri tells Tina to get over Shalin as his game is over.

Tina mimics Shalin who is now walking strongly by pulling his jeans who was just like a scaredy cat before the nominations.

Archana Gautam is from another planet!

Archana tells Pri that now everyone's true colors will come out now and Nimrit later advises Archu to not pretend that she is alone and also befriend others.

Later, Archana is back again, reciting her Shayari all alone in the garden, and chuckles at her creativity.

She rolls back on her bed and laughs out loud while the Mandali, including Shalin, stares at her.

Shalin says she is very spooky and Shiv agrees, stating that she is indeed a character.

Priyanka asks Archu to announce that since dinner is done, all can eat dinner because she won't wash dishes.

Tina begins it, and Archu tells Nimrit while Nimrit asks who made the rules while Priyanka says she also has to wake up early.

Both get into a fight while Archana and Pri laugh to see Mandali all break up.

Shiv asks his Mandali members to remain playful and not pay heed to Priyanka.

Shalin cannot get Tina out of his mind!

In the night, Archana begins her Shayari in a sexy tone, making Tina laugh while Priyanka questions her if she has fallen in love.

Shiv knocks on their door to keep it light while Archu says she has to look at Shalin's face so none of her romantic sides comes out.

In the night, Shalin paces in the garden, talking to the cameras, and states he has never seen a faker person than Tina.

He says she is sitting with those people now who used to call her fake when instead, she could have respected him and both of them could have maintained each other's dignity.

He says no one will marry her outside since she wants to get married.

In the morning, Shalin is up while Priyanka and Tina have to offer water to Sun.

They both go grumbling while Shalin hums to himself to remain normal.

All the contestants start dancing when the siren goes on, singing the BB anthem.

Archana wants the "real" Shiv to come out

Shalin then sits with Nimrit, saying Tina doesn't have any self-respect while Archu entertains Priyanka with her newly found craze of Shayari.

However, Archu feels that Shiv is just trying to pick a fight with her while Shiv tries to create an argument with Tina, Pri, & Archana together when Archana shows off her "swag".

Stan joins the argument and they all, as usual, target Priyanka as screams and shouts are heard throughout the Bigg Boss house.

Later, Archana gets happy when Maahim for the very first time gives her a kiss.

While eating, Shiv and Stan sit up to go eat at another place since Priyanka and Tina are eating there.

Nimrit questions them later and they again talk about "Insaaniyat" & humanity and it doesn't seem like the contestants will be able to transcend the moral policing of each other.

© Copyright tellybest.com, 2022, 2023. All Rights Reserved. Unauthorized use and/or duplication of any material from tellybest.com without written permission is strictly prohibited.
Cached Saved on: Friday 27th of January 2023 11:58:47 PMCached Disp on: Thursday 2nd of February 2023 08:10:38 PM