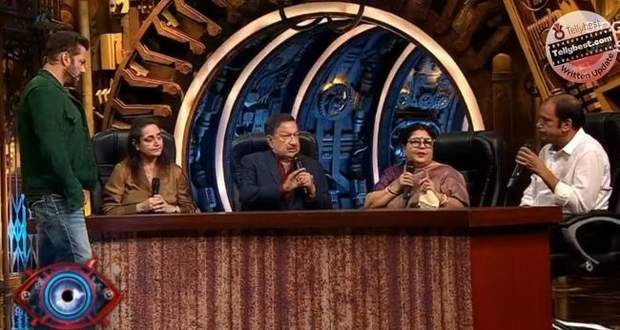 Inside the house, the captaincy task is still going on between the King's favorite team and his nonfavorite team.

MC Stan announces that the last round is also won by the King's favorite team, the royal team, while Soundarya Sharma & Priyanka Chahar Chaudhary state that the other team is a cheater.

Nimrit Kaur Ahluwalia gets agitated by Priyanka while Priyanka screams back at her, saying what she did is cheating.

Archana Gautam asks Soundarya & Priyanka not to lose their energy & breath as Stan is biased.

Meanwhile, Sajid Khan charges angrily at Archana who says he should not meddle in between when MC Stan is the "Sanchalak".

Ankit Gupta has a temper!

Later, Sajid asks Sumbul to get up from where she is sitting with Shalin. Sumbul quietly stands up while Shalin says she still doesn't have the brains to know where to sit and where not to.

Ankit Gupta lashes out at Tina for not saying anything when she clearly knows who cheated and who did not.

Meanwhile, Archana breaks down in the bathroom in front of Priyanka and states no one stands up for her.

She says if Sajid is so prone to heart attack, he shouldn't have come here when he himself doesn't know how to respect the woman of other contestants' families.

She locks herself in the bathroom while Soundarya & Priyanka try to get her out.

Fahmaan, the 'Mehmaan' of BB16

Later, Bigg Boss announces that there is a new wild card entry into the house and Fahmaan Khan enters.

Sumbul hugs Fahmaan immediately while Tina slyly whispers to Shalin that it is Fahmaan.

Nimrit tells Fahmaan that Sumbul needed his support while Sumbul happily shows Fahmaan the interiors of the Bigg Boss house.

Archana asks Fahmaan how she is looking outside and Fahmaan advises her not to think whatever anyone thinks of her inside.

Sumbul privately tells Fahmaan that her father called her and Bigg Boss showed the clip to everyone.

ShaliNa is pleased or displeased?

Later, Shalin Bhanot guides Fahmaan to where the shower is while Shiv Thakare playfully utters that he wanted to see a woman wild card contestant.

Shalin asks Fahmaan whether he knows what transpired till now with Sumbul and he says he has been following the show.

Fahmaan says Shalin had to retract back once after Salman's warning while Shalin laughingly states he had to listen to Sumbul praise Fahmaan all the time.

At night, Archana raises the topic of ghee and asks Sumbul who used the portion of her ghee to make biryani.

While having dinner, Ankit asks for some ghee from Archana and a fight breaks out between Priyanka & Ankit.

Soundarya also advises Archana to keep it low and says she cannot be a "Janani" like her.

Before sleeping, Archana throws comments at Priyanka, saying whomever she marries will have incoming trouble while Ankit shuts Archu up, saying, that is why Sajid comes after her.

Meanwhile, Fahmaan is sitting with Sumbul, Sajid, Shalin, Tina, Abdu, and Stan, while he jokes about having Abdu as an enemy since he is also liking Nimrit.

Later, Fahmaan and Sumbul are sitting alone together and discuss the BB16 game. Fahmaan advises Sumbul to not go with expectations.

The happiness on Sumbul's face is very obvious and it melts everybody's heart in the house.

The next day, all the BB16 contestants wake up to the Bigg Boss alarm and Fahmaan enjoys the BB anthem.

Archana gets overwhelmed and runs inside her room crying after the BB anthem.

Nimrit and the group ask Ankit what was the matter last night.

Furthermore, everybody gets ready to meet Salman Khan when Archana taunts Tina and Shalin.

Abdu Rozik is a man, not a kid!

On the other hand, Abdu Rozik gets upset about being treated like a child by other contestants for which he goes to Shiv and MC Stan and shares his heart with them.

Salman Khan greets the contestants in the living room and first welcomes Fahmaan into the house.

He teases Shalin stating that he is the person who was upset with Fahman's entry into the house.

Shalin goes back to his explaining mode where Salman put the coma and asks Fahman to enlighten the contestants with the misunderstandings they have by bursting their balloons.

Fahmaan burst the balloons one after one and tells Priyanka that initially she was playing well but now she has started involving herself in nonsensical issues while to Ankit Gupta, Fahmaan says that the man doesn't have any misconception.

Everyone goes into a fit of laughter and claps for Fahmaan while Salman removes one of the biggest misconceptions of all the contestants that Fahmaan is the wildcard contestant.

Salman Khan announces that Fahmaan Khan is not a contestant in BB16 but has come to promote his new serial on the channel named Pyar Ke Saat Vachan Dharampatni.

Sumbul and others say goodbyes to Fahmaan with heavy hearts and everyone sees Abdu getting fond of Fahmaan.

Salman teases Soundarya for the change in her entire avatar and gameplay after Gautam left the house.

Further, the cast of Tanav joins Salman on the BB16 stage where Salman makes them play the Helium balloon game.

The guests enjoy a lot while the contestants are busy indulging in or creating issues in the house.

Later Salman comes back and asks Archana and Sajid to state their reasons for disliking each other.

© Copyright tellybest.com, 2022, 2023. All Rights Reserved. Unauthorized use and/or duplication of any material from tellybest.com without written permission is strictly prohibited.
Cached Saved on: Monday 28th of November 2022 12:04:25 AMCached Disp on: Tuesday 6th of December 2022 12:28:36 PM