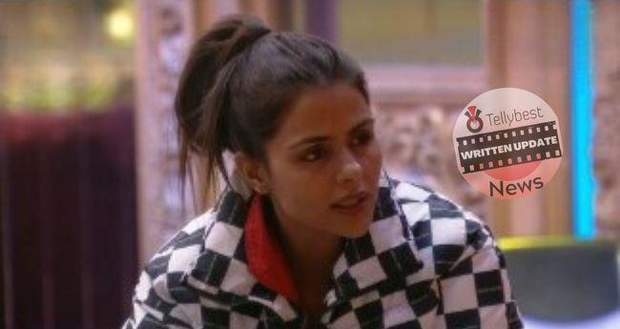 Further, Soundarya Sharma complains to Nimrit Kaur Ahluwalia about what Archana Gautam told her while saying that she fears the viewers will also not like it.

Meanwhile, Gautam Vig sits with Sajid Khan and tells him that he doesn't want anything to be wrongly misinterpreted as he truly likes Soundarya.

Bigg Boss calls all the contestants into the living room and announces that he is punishing the two contestants for speaking in English even though it is a Hindi Serial.

As a punishment, Bigg Boss tells Nimrit and Soundarya to go to the balcony and apologize for not speaking in Hindi in a Hindi Show while joining hands and not stop until Bigg Boss gives them further notice.

All the contestants get humor from this, especially Sajid, Abdu Rozik, and Ankit Gupta.

Later, Bigg Boss let them off the hook and informs them of the next nomination for the elimination task where Bigg Boss will first call in two contestants who will be on the safe side.

Meanwhile, Bigg Boss will once call two contestants from whom the initial two will have to decide who needs to be nominated for elimination.

If they cannot come to a conclusion, in the end, the two deciding contestants will go into nominations for elimination.

Tina Datta and Nimrit are called into the safe zone first and have to choose between Shalin Bhanot and Gautam.

In the end, Tina and Nimrit end up nominating Gautam and saving Shalin.

Afterward, Bigg Boss calls Shalin and Tina into the confession room and asks them if Nimrit ever told them that she would nominate herself to save Shalin and Tina.

Both of them realize that Nimrit is playing and Tina says that she will not become a fool anymore.

Later, Gautam is complaining about Tina, Shalin, and Nimrit to Sumbul Touqueer while Soundarya also argues that Nimrit should have saved Gautam as her friend.

Afterward, Sajid and Abdu have to choose between Ankit and Nimrit which makes them laugh at their own misery.

Sajid and Abdu end up nominating Nimrit and saving Ankit.

Later, Abdu complained to Gori Nagori and MC Stan that Sajid saved his friend Ankit and put the whole blame on him.

Priyanka Choudhary and Shiv Thakare have to choose between Stan and Soundarya.

Soundarya gets nominated while Shiv convinces Priyanka to save Stan.

Priyanka comes out of there and starts arguing that Shiv played with the timings and saved his friends.

However, Bigg Boss calls Shiv and Priyanka into the confession room and makes Priyanka explain that it is perfectly normal to save their friends in times of need.

Gautam keeps taunting Tina which triggers her and Shalin to argue with him and reveals that Tina was even ready to nominate herself.

Afterward, Soundarya and Shalin have to decide between Shiv and Sumbul while the other housemates think that Shalin will definitely save Sumbul.

However, Soundarya fights with Shalin to save Sumbul who is arguing that they need to save Shiv.

In the end, Sumbul gets saved while Shiv goes into nomination for elimination after which Shalin tries to talk to Sumbul who rejects his advances.

Further, Sumbul and Gautam have to choose between Abdu and Priyanka.

They decide to save Priyanka and Abdu gets nominated & later Sumbul keeps apologizing to Abdu.

Bigg Boss scolds Sumbul saying that she should not have nominated Abdu if she is feeling so guilty about it.

On the other hand, Ankit and Stan have to decide between Sajid and Tina which makes them witness a very comedic event.

In the end, Tina gets nominated while Sajid gets saved.

Tina goes to Abdu and calms him saying that she is sure they are not going to eliminate while he says that it is time for them to realize who is playing the friendship game and who is their real friend.

Shiv and Stan try to cheer up Abdu while Gori cries saying that it is unfair that Abdu is nominated.

Toward night, Sajid tries to keep Abdu away from house politics by telling him that he came to the house on his own and should not get influenced by anyone.

Abdu no more likes his BROs'?

Afterward, Abdu vents to Stan, Shiv, and Gori as he complains about all the contestants and why they are inside the house.

Sajid comes there and asks Abdu if he's angry while Abdu informs him that he is going to sleep with Shiv tonight, not Sumbul.

However, Sajid tries to convince him saying that he shouldn't say that as it is all politics but Abdu keeps saying that he knows what games are being played.

Seeing Sajid in pain, Abdu starts stroking his hand asking him what happened while Sajid reveals that he has been having back pains.

© Copyright tellybest.com, 2022, 2023. All Rights Reserved. Unauthorized use and/or duplication of any material from tellybest.com without written permission is strictly prohibited.
Cached Saved on: Monday 21st of November 2022 06:08:34 AMCached Disp on: Tuesday 29th of November 2022 11:04:24 AM