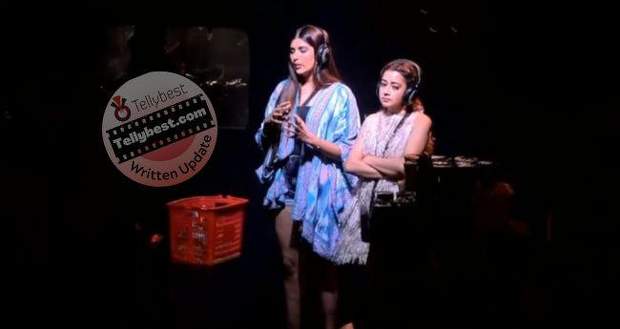 Today's Bigg Boss 16 26th December 2022 episode (day 87) starts with all the housemates waking up after the sirens as they go to the garden and charge themselves by singing the BB Anthem.

Everyone wishes each other Merry Christmas and Shiv Thakare comes up to tease Shalin Bhanot about him only wishing Christmas to Tina Datta.

Shalin runs behind Shiv, saying it is not his Christmas but everyone's (meri nahi, teri bhi Christmas hai bhai!).

Shalin then hugs Sreejita De in front of Tina to make her feel jealous while a little later, Tina asks Shalin & Vikkas Manaktala to help her chop the vegetables.

Tina says "Shame on you boys!" jokingly but Shalin takes it to heart along with Vikas who informs Tina that saying shame on you is not a kind word.

Tina then goes to the bathroom and asks Shalin if he is going to help her do the chopping or not while Shalin asks her to be cautious with the words she uses, otherwise, other contestants will mock him.

Later, Archana Gautam gets into an argument with MC Stan who complains to her that she hasn't cleaned the captain's room properly.

Archana asks Stan to ask Shalin & Priyanka but Stan asks her to be humane enough and considers the other contestants' ill condition.

Archana roams around the whole house and asks Soundarya whether she asked Priyanka Chahar Choudhary or not.

Archana then lashes out at Priyanka that she should learn to do the tasks since she is a girl and would be going to someone's house as a daughter-in-law.

Priyanka stays quiet during Archana's outpouring of anger while MC Stan calls Archana to shut up and a "Shemdi" who is mad enough to fight with anyone to get some extra footage.

Later, Bigg Boss asks everyone to come into the living area and announces that a new member is entering the house.

Happiness comes wagging her tail in the Bigg Boss House

He then asks if everyone is missing their pets and all the contestants jump out of their spots, nodding their heads in unison.

A female dog by the name of Maahim comes, wagging her tail and everyone gathers around her to pet her.

Abdu Rozik keeps his distance from Sajid Khan who says that he dislikes dogs from the very beginning.

Archana gets the happiest when she sees Maahim take a piss on the ground and urges her to potty as well.

Meanwhile, Shalin lounges with Priyanka and Tina and reveals he felt hurt by Tina's wording and Priyanka says that for every relationship, respect is important as well.

On the other hand, Sajid sits with Nimrit, Stan, and Abdu and speaks that Abdu has returned with some attitude from outside.

Nimrit agrees and says that Abdu is running away from her deliberately and Stan says that he feels Abdu is now only talking to Shiv.

Later, Bigg Boss announces for everyone to gather in the living area again and questions everyone when was the last time they went to a Mandi for shopping.

Tina raises her hand while most of the contestants reveal they haven't in a long while.

Bigg Boss informs everyone that for this week's ration, the housemates will go in pairs inside BB Mandi to shop for groceries and only five rounds of this task will happen.

Archana and Shiv go inside and gets surprised when Bigg Boss says that it is not only a shopping task but a nomination process as well.

They both fill their baskets with ration items and Archana nominates Sreejita and Shiv nominates Vikas.

In the second round, Nimrit Kaur Ahluwalia and Tina go inside and ends up nominating Sumbul Touqeer Khan and Priyanka.

However, the third round gets canceled by Bigg Boss as Vikkas and Sumbul get into an argument as to who will go with Sreejita.

Vikas's point is that since people from Room 3 have gone twice, other people should get a chance as well.

However, their argument doesn't end up nicely as they both yell at each other at the top of their lungs with Sumbul calling Vikkas a manchild.

In the fourth round, Shalin and Priyanka go and nominates Nimrit and Soundarya.

After they come out, Nimrit asks Shalin discreetly who Priyanka nominated and Shalin takes her name.

However, when Shalin asks Nimrit who she nominated, she ends up saying she didn't take his name or Priyanka's.

Shalin knows already that she nominated Priyanka since Tina told him this.

In the fifth round, Soundarya and Sajid go inside the BB Mandi, and nominate Tina & Shalin.

Later, Bigg Boss announces that due to Vikkas & Sumbul's fight, the third round got canceled so he will give Stan and Abdu a chance to get 20 items for the whole house.

Abdu then goes to Sajid and apologizes if he felt anything wrong but Sajid still affirms that Abdu has changed.

In the kitchen, Archana tries to instigate Priyanka by bringing Ankit Gupta's name, again and again, saying now that Dulha has gone, whose emotional support will she take?

Priyanka challenges Archana to become the next captain while Sreejita speaks in favour of Priyanka, saying Archana is a ginger stealer.

In the garden, Priyanka informs Shalin and Tina that Archana's screeching is still ringing in her head about betting who will win and who will not.

© Copyright tellybest.com, 2022, 2023. All Rights Reserved. Unauthorized use and/or duplication of any material from tellybest.com without written permission is strictly prohibited.
Cached Saved on: Wednesday 25th of January 2023 09:51:46 AMCached Disp on: Wednesday 1st of February 2023 08:32:58 PM