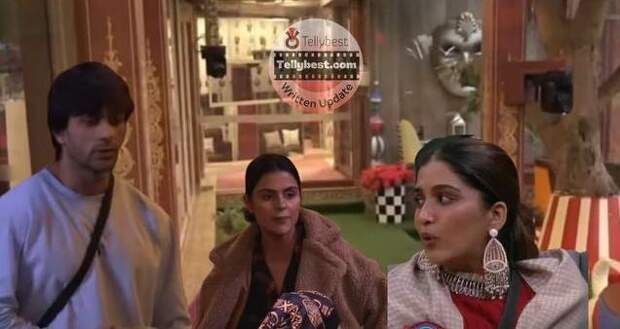 Another day, Another Fight in the BB16 House

Shiv Thakare gets angry and goes to occupy one of the beds in Room No 4. while Tina does the same and Nimrit Kaur Ahluwalia also plops down on Priyanka's bed.

Shalin Bhanot comes to reason with Priyanka that since Sumbul is not comfortable sharing a bed with a boy, Priyanka must opt to go to Room No 3.

Everybody gets into a heated argument since Mandali wants to stay in the same room but Priyanka will not lose her bed along with Tina.

Meanwhile, Archana makes it clear that she doesn't want to fight and is ready to sleep in Room No 3.

Nimrit and Sumbul target Priyanka all alone while Shiv passes a boorish comment about Priyanka that she is a 'bai' (a lady who wants fights and invites trouble).

Just then, Bigg Boss addresses their fight over their territories and says he has a task for them to opt for ration.

In the ration task, Bigg Boss has laid three-wheeler scooters for contestants to make use of as their vehicle to go to the food counters.

There are food counters named Vegetarian, Non-Vegetarian, & Others where milk, bread, oats, etc. are kept.

The BB16 contestants can only take up to 5 items and Nimrit & Tina are the first ones to get their items, followed by Shalin & Priyanka.

Shalin & Priyanka get into a discussion about whether to go to the Non-Veg section or Others.

Mc Stan bitches about Shiv that he is tired of seeing these people take footage and taking so much time on deciding whether to take the bread or not.

Archana and Shiv go to the vegetarian section while Stan and Sumbul get the food items for themselves as well.

Fight For The Bed!

Later, Bigg Boss teases Shalin by giving 1KG of chicken to Tina while Priyanka takes it and gives it back to Shalin since he gave his portion of chicken for the soup that got made for Tina.

Shiv glares at all the drama as the whole Mandali discusses how fake everyone is except them.

Meanwhile, the discussion over Room of 3 and Room of 4 still ensues while Archana personally feels there's no gain in fighting for a room when there's no peace of mind.

Shiv turns disrespectful as Stan goads him both of them single-handedly target Priyanka and Priyanka's head nerve starts to show up.

When all of them go, Archana calls out to both Priyanka and Tina, inviting them to come to her room.

Priyanka considers Archana's proposal as Archana says they all three can have a blast together as they have all the ration stock.

Shiv & Stan are irritated by Priyanka

Meanwhile, Nimrit beckons everyone together and asks what the final decision is and Priyanka and Tina announce that they will be together.

During dinner time, Shiv, Shalin, & Stan walks out into the garden while Priyanka and Tina eat together at the table.

Tina tells Priyanka that she is very grateful for her because if she was not there, she would have collapsed.

At the night, Priyanka, Archana, and Tina make fun of the vegetables looking funny after the light goes off.

Priyanka chuckles that Archana's mind is on ration all the time while Archana mischievously says and asks Bigg Boss to send slightly longer bananas next time.

Hearing their laughter, Stan tells Shiv that he doesn't feel like socializing with them.

In the morning, Archana makes an on-spot Shayari while Shalin does his morning exercise.

Shalin leaves while Archana laughs that now he is going to quote the word-to-word Shayari to Mandali now.

Later, Tina and Archana have fun in the kitchen as Tina spanks Archana while she cooks.

Upon seeing this, Sumbul tells Shiv that as a girl she is uncomfortable but says she is no one to judge them.

Priyanka reads out a new activity sent by Bigg Boss for the boys sponsored by Garnier Men.

Shiv wins the task but Shalin gets into a tiff with Archana as Shalin had said earlier that he got irritated seeing Tina spank Archana.

Shiv and Stan gossip that all are playing girl power cards while Archana personally finds it offensive.

Shalin ends up calling Tina "Nobody's interested in talking to you, baby" while Tina lashes out at him saying, she is not HIS baby.

Shalin then enacts the whole spanking scene to the Mandali after which Priyanka calls Sumbul and asks her if what Shalin is saying seems right or wrong.

In the night, Archana playfully goes to Nimrit and asks her if she is interested to listen to her Shayari.

However, Shiv asks Nimrit to go outside and listen to it since he is not at all interested.