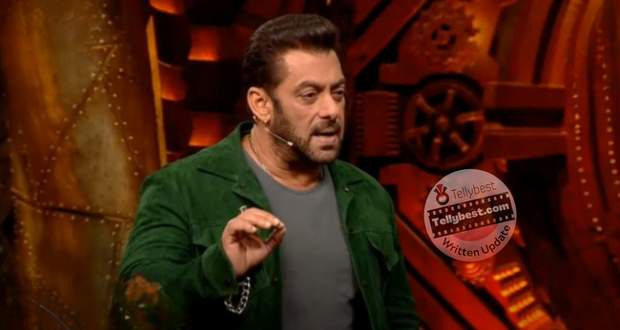 Salman talks about Archana Gautam and Sajid Khan running the show this weekend and addresses them by asking them what was the scenario between them.

Archana and Sajid talk about what they felt the other did wrong while Sajid argues that Archana provoked him unnecessarily.

Salman asks Archana to state what she thinks she did wrong.

Archana talks about how the contestants are threatening to kick her out and keep reminding her about how she begged them to stay on the show.

Salman further asks Sajid the same questions as to what he thinks he did wrong in moments of anger.

Further, Salman tells both of them to sit down on their thrones and asks MC Stan if he thinks he is safe or not.

Stan says that he feels he has been low this week while Salman assures him that he is safe.

Afterward, Salman talks about both the separate groups of Sajid and Archana while asking Archana what she is hurt about the most. Her fight with Shiv or the fact that her friends did not support her in front of Sajid.

Salman turns the conversation to Priyanka Choudhary and asks her to name the incidents where she has supported Archana and also asks Soundarya Sharma where she thinks Archana went wrong this week.

Salman further asks Priyanka where she thinks Archana went wrong and reveals that Priyanka throws her friends under the bus to act "Mahan" (Great) in front of the cameras and the audience.

Further, Salman reveals how Priyanka takes small favors in terms of coffee and other things and asks her how she can be against someone and take favor from the same person.

Calling out to Priyanka, Salman states that Priyanka is using Archana as a fighting machine when she has no other means of looking like a good person in front of the audience.

Afterward, Salman talks about Sajid's panel of 'lawyers' and calls out Shalin Bhanot, Shiv Thakare, MC Stan, and Nimrit Kaur Ahluwalia while asking them if they think Sajid was not wrong at any moment this week during his altercations with Archana.

They all try to justify by saying that they did tell Sajid that he was wrong on many occasions while Salman states that he is going to tell them the accurate statement that was said by Sajid Khan.

After hearing the accurate statement, Salman questions the contestants if they still feel like Sajid was correct.

Sajid tells Archana and the rest of the housemates to not speak against his family if they do not know him or his family personally.

Afterward, Salman tells Archana to drill this into her brain so that no one can kick her out from inside the house except for the audience if they do not vote for her.

Salman further asks Sajid if he is taunting Archana or the whole show when he says that she has been brought back.

Sajid says that he was telling it directly to Archana and apologizes while hugging Archana.

Furthermore, Salman reveals that many contestants (mainly Tina Datta and Nimrit) have been lying about many things to take advantage of Sajid's anger and tell him to clarify everything before believing it.

Salman calls out to Ankit Gupta for talking about the show eliminating the contestants that they do not like and the voting not being real.

Afterward, Salman plays a prank and tells Ankit to get out of the house after which he tells that both the most inactive (Ankit) and most active (Archana) are safe from elimination this week leaving Sumbul Touqueer and Soundarya the only options.

Later, Salman welcomes the famous actress Kajol on the set and plays a game with her where have to make each other laugh or blink.

Salman further welcomes the director of the film 'Salaam Venky', Revati whom Salman knows from the past.

Most of the contestants take Archana's name while she laughs and says that she will only save those she feels like keeping.

Further, Salman tells the housemates he will come inside the house to announce the elimination and bids them goodbye.

Back at the set, Salman tells the audience that they are bringing in some family members for the rest of the episode and welcomes Shalin's parents and Tina's mother.

Salman jokes with the contestants and asks them how Shalin addressed how Tina used him and then threw him away by taking an example of a tissue paper.

Afterward, Salman asks all three parents their opinion on whether they think Shalin and Tina being together in the show is an advantage or a disadvantage to them.

Salman further tells the audience that they recently broke a rule when they had gotten a call from one of the parents who said that they were in a serious condition and needed to have a call with their child.

Tina's mother stands up for her daughter against Sumbul's father!

Salman calls Sumbul's father and talks to Salman Khan saying that he was in the ICU and was on a drip during the past week.

Further, Sumbul's father confronts Tina's mother and asks if she doesn't feel the need to say sorry for all the words that Tina has used against his daughter Sumbul.

Tina's mother stands up for herself and tells Sumbul's father that their children are in a reality show not in kindergarten that they need their parents to fight for them and guide them.

Salman intervenes and tells Sumbul's father that it was wrong of him to tell the show that he was critical and then talks to Sumbul about the show regarding another contestant.

Both Shalin and Tina's parents talk in support of Salman and tell Sumbul's father that he did wrong by lying about his health and criticizing another one's daughter.

Tina's daughter stands up for her daughter and tells Sumbul's father that he should not have sent his daughter into the show if he was not ready to see his daughter playing the game and being played with.

However, Sumbul's father keeps on saying that he was unconscious and does not even remember what he had said to them on the call.

He again apologizes to Tina and Shalin's parents after which Salman bids them goodbye.

Fahmaan and Kritika dance with Salman!

Salman jokes that the parents should have been in the show and welcomes the cast of the upcoming show 'Dharampatni' on the set.

Fahmaan Khan and Kritika Singh grace the stage and do a cameo drama with Salman as they promote their upcoming show Dharampatni.

As the guests leave, Salman greets the housemates once again and tells them to reveal their opinion on which contestant is getting used by which contestant and to throw the tissue paper with the contestant's face and throw it in the golden toilet seat.

Who is eliminated this week?

Most of the contestants accuse Priyanka of using Ankit, Soundarya, and Archana.

Further, Salman informs the contestants that there is NO Elimination this week and bids them goodbye.

Later, Sumbul cries saying that she misses Fahmaan and wanted to leave this weekend only.

On the other hand, Shalin and Tina again argue over something and stop talking to each other.

© Copyright tellybest.com, 2022, 2023. All Rights Reserved. Unauthorized use and/or duplication of any material from tellybest.com without written permission is strictly prohibited.
Cached Saved on: Monday 28th of November 2022 11:54:33 PMCached Disp on: Saturday 10th of December 2022 02:04:36 PM