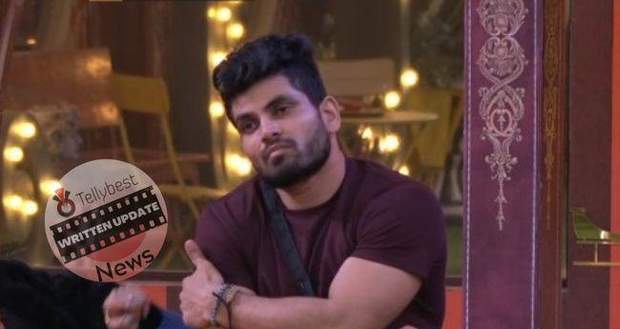 Today's Bigg Boss 16 26th October 2022 episode (day 26) starts with the contestants waking up and singing the Bigg Boss anthem with sleep in their eyes.

Archana Gautam and Priyanka Choudhary tell Abdu Rozik that they are waiting for him to get angry while Abdu calmly tells them that he will get angry only after the Weekend Ka Vaar and that he knows his fans will do everything to save him.

For the breakfast, Gori Nagori tells Archana that she is sick and tells her to give the breakfast duty to anyone else and give her some other duty.

Abdu tells Archana and Shiv Thakare afterward that he will take his revenge afterward but will give the fake contestants the silent treatment for now.

Meanwhile, Shalin Bhanot tries to talk to Sumbul Touqueer and manipulate her once again but she states that she doesn't want to talk to him.

Later, Bigg Boss calls the house phone and tells Archana that she is free from her duty as the captain and tells all the contestants to gather in the living room.

The New Captain of the BB house is...!

Afterward, Bigg Boss tells the contestants that to get the captaincy, they will have to race to the throne in the activity area once the buzzer sounds and the one to sit first will get the captaincy.

SHIV gets a chance at captaincy

Shiv manages to get to the chair first while Bigg Boss gives Nimrit Kaur Ahluwalia a chance to choose between the ration for the next week or keeping Shiv as the captain.

Shiv convinces Nimrit to let go of the ration and support him while Bigg Boss reads out loud all the items that Nimrit has let go of which shocks all the contestants.

All the housemates feel betrayed by Nimrit's decision to let go of so much ration while Nimrit keeps justifying herself by saying that she did what she wanted to.

Gautam Vig confronts her while she tells him to not raise a finger at her for deciding by herself without consulting him.

Afterward, MC Stan gets the chance while Shiv convinces him to select the ration but only for his room and not the whole house.

The race to sit on the chair begins once again and Gautam wins the task as Bigg Boss asks Soundarya Sharma to choose between him or the ration.

Soundarya lets go of the ration to support Gautam while Bigg Boss calls Nimrit into the confession room and sympathizes with her due to the hypocrisy of Priyanka and Archana.

No captain this week

Afterward, Ankit Gupta gets called in to select but Bigg Boss keeps making him go from one end of the house to another to work him up since he was sitting in the garden the whole day.

Gautam keeps begging Ankit to save him by taking his parent's name while Ankit chooses the ration.

Bigg Boss announces that it is the end of the task and shows him the empty chair indicating that there will be no captain this week.

Bigg Boss tells the housemates that it will be only Shiv and Ankit's decision on whether they want to share their ration or not.

Archana gets ousted from the Master Bedroom

Meanwhile, Archana keeps emptying her room while Bigg Boss scolds her and gives her only ten seconds to get everything from the master room.

All the housemates help her after which during dinner time, Nimrit brings up the topic of them pointing fingers at her once again and Gautam starts arguing with her.

Nimrit has a breakdown while Tina Datta tries to comfort her.

Nimrit tells Gautam that he never supported her and when she sits alone in the house, Shiv is the one who sits with her.

However, Gautam shouts at her that she should say to him to his face that she has found new friends and doesn't want to be friends with him anymore.

At night, Archana lies beside Priyanka and reveals to her that Gautam wanted to be captain cause he fears elimination.

Priyanka laughs as Archana calls him a coward and states that she will put him in nominations from now on.

On the other hand, Soundarya sits with Gautam and talks down on Nimrit while comparing her to Sumbul.

© Copyright tellybest.com, 2022, 2023. All Rights Reserved. Unauthorized use and/or duplication of any material from tellybest.com without written permission is strictly prohibited.
Cached Saved on: Monday 21st of November 2022 07:12:36 AMCached Disp on: Monday 5th of December 2022 12:12:05 AM