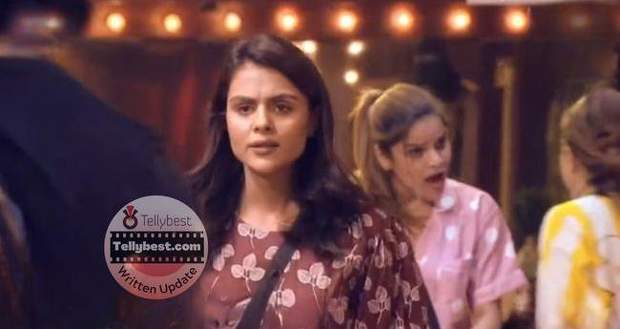 Today's Bigg Boss 16 28th December 2022 episode (day 89) starts with all the housemates waking up to the sirens as they go to the garden and sing the BB Anthem.

Further, Tina Datta asks Archana Gautam about breakfast while Archana mocks Vikkas Manaktala saying that some people act like royals and refuse to do the dishes on time which delays her making the breakfast.

They both get into an argument while the housemates try to calm them because they want breakfast.

Afterward, Archana again decides to take revenge as she tells Shalin Bhanot to take less Curry as there is Dal also.

While Tina and Priyanka Chahar Choudary fight with Archana for drama over food, Shalin gets violent and throws the chair in the living room.

Archana uses her foul language which makes Shalin lose his mind as he goes to the garden shouting at Bigg Boss to call him to the confession as he cannot do these fights anymore.

Sajid Khan tries to calm Shalin while Shalin reveals that Archana talked against his mother and his family.

Tina tries to calm Shalin while he keeps on saying that he wants to leave the show after talking to Bigg Boss.

He cries saying that he is the one who gets scolded and humiliated by Salman Khan every Weekend Ka Vaar after hearing such humiliating and dirty words from housemates.

The housemates come and try to calm Shalin while he says that this is not a good show and that he will live peacefully outside.

Afterward, Shalin talks to Tina and Sreejita De while Nimrit Kaur Ahluwalia and Shiv Thakare talk to Sajid and explain to him how Shalin's actions are coming back to him.

Nimrit says that Archana has a habit of speaking which is known by everyone inside the BB House and that Shalin is the one who was instigating Archana and was doing emotional drama afterward.

Archana boasts about her patience level to Soundarya Sharma and Sajid Khan while Shalin, Tina, Priyanka, and others bitch about Archana.

Shalin tells Shiv to make sure that Archana does not get the kitchen duty while telling his group members that Archana should be eliminated.

Meanwhile, Shalin tells his group that he is looking forward to the upcoming Weekend Ka Vaar.

Soundarya and Sreejita KISS each other!

At night, Soundarya and Sreejita peck each other and tell Shiv and Abdu to do the same.

The boys get shocked and hide while Soundarya and Sreejita laugh saying that they are scandalized.

When Abdu talks a little disrespectfully, Soundarya tells him that he should not say such a thing as love is love only.

The next morning all the housemates go to the garden and sing the BB Anthem.

Afterward, Sajid asks Soundarya why Priyanka does not greet them morning while Soundarya says that Priyanka is mannerless and narcissistic.

At the same time, Shalin about Soundarya's career and how she got famous even after knowing only a few people with an underlying meaning.

Tina shares her love life with Maahim, the Dog!

On the other hand, Tina brings in Maahim inside the house and lies beside her while talking about the trouble in her love life.

Abdu and Shiv tell Sumbul about Soundarya and Sreejita's peck but she changes that topic saying that they are very casual about it.

Meanwhile, Sumbul tells Shiv about her observations regarding all the housemates.

Further, Tina again lies with Maahim and cries as she says that she is missing ZuuZuu so much.

Later, Priyanka tells Shalin that Tina felt bad when he didn't dedicate a song to her while he calls her Sakhi and tells her that Archana is better than Tina as Tina is unpredictable.

However, when Shalin talks to Tina, she tells him to give her cold vibes as that would be the best for them.

Archana flirts with the camera

Archana does her drama by flirting with the camera and describing him as a man.

Meanwhile, Priyanka reveals to Shalin that she is feeling so low that she wants to get out of the house and get married.

Does Priyanka wish to get married?

Shalin asks her why and she reveals that she wants to be appreciated for the things she has done right as she is only hearing insults and humiliations.

Priyanka reveals how Archana's words are taking a toll on her while he tries to calm her.

Afterward, Priyanka talks about the celebration with the girls getting special treatment from the TRESEMME and the boys also getting certain products to style their hair with it.

Further, all the housemates dance in the garden while Shalin unbuttons his shirt and starts flexing his abs.

However, Tina comes there and teases him saying that all the girls are going crazy over him.

He holds her close to himself as he says that wants to make only one girl crazy.

Shalin dances with her and the housemates look away feeling shy as if intruding on their private moment.

Tina reveals her feelings for Shalin

Sreejita and others joke with Shalin that they are not checking him out while he also jokes and says that they can check him out if they want to.

At night, Priyanka talks to Tina, and Tina reveals that she feels stupid for feeling special with Shalin while he treats her like everyone else.

On the other hand, Vikas asks Shalin if he sees a future with Tina outside the house.

However, Shalin clearly says that they will either hate each other or become best friends but not anything more than that.

Meanwhile, Nimrit cries to Sumbul and reveals to her how she feels that she does not deserve the rudeness that Abdu is showing her.

© Copyright tellybest.com, 2022, 2023. All Rights Reserved. Unauthorized use and/or duplication of any material from tellybest.com without written permission is strictly prohibited.
Cached Saved on: Wednesday 25th of January 2023 12:54:02 PMCached Disp on: Monday 6th of February 2023 02:34:21 AM