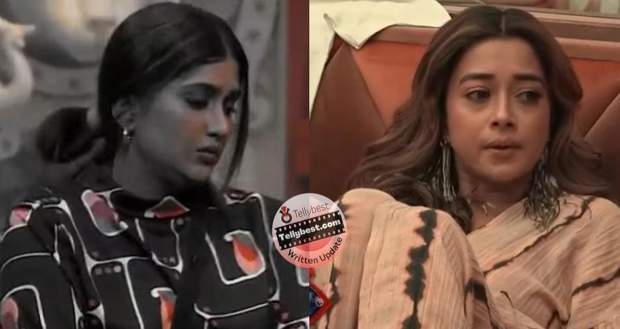 Today's Bigg Boss 16 28th November 2022 episode (day 59) starts with all the contestants waking to the sound of sirens while Shalin Bhanot is already in the garden drinking coffee.

The contestants gather in the garden and sing the BB Anthem while Shalin and Shiv Thakare dance together.

Sajid Khan and his friends discuss who is going to win the captaincy task and how Tina Datta will react if she loses.

Nimrit Kaur Ahluwalia tells Shiv that she likes Priyanka Choudhary more than Tina since Priyanka is true to her face and is not two-faced like Tina.

On the other hand, Shalin walks with MC Stan and tries to have a conversation with him while MC Stan gets annoyed that Shalin keeps forgetting things and asks the same thing again and again.

Sajid goes to Shalin and tells him about Stan feeling upset while Shalin says that he had truly forgotten about MC Stan's father and was even confused by Stan's words.

Later, Bigg Boss calls a meeting in the living room and tells Shiv to come into the confession room.

Further, Bigg Boss says that he has been hearing their conversation and knows that they have planned to make the captain from Tina, Nimrit, and Shiv only.

Bigg Boss asks Shiv whom he would like as the next captain and he takes Nimrit's name which shocks Tina.

Once Shiv comes out of the confession room, Bigg Boss announces Nimrit as the new queen (captain) of the house and reveals that there will be no more favorites or royal cooks this week.

Afterward, Tina leaves from there and Shalin goes after her saying that he did not know Shiv would pick Nimrit or if she was even considering being a captain.

Priyanka and her group support Tina by telling Shiv that he should have given Tina a chance.

Tina gets upset on her birthday!

Tina goes to her room and tells Bigg Boss to not send her a cake even as she does not celebrate it with these two-faced people.

Nimrit argues with Tina telling that she is not responsible for Shiv making her the preference.

Later, Bigg Boss calls Tina into the confession room and tells her to vent to him.

Tina tells Bigg Boss how she feels betrayed by Shiv and how she is going to show her true colors now by ruining Shiv's group.

She says that she does not want to take the cake with her but opens it and gets surprised to see that it is her favorite cake.

She takes the cake to her room and shares it with only Shalin while other members laugh learning what is happening.

Afterward, Bigg Boss calls all the housemates into the garden area except for Nimrit and MC Stan for the elimination task.

At the start of each round, Nimrit will turn the wheel of luck while the winning team will choose one contestant to be the gatekeeper who will allow all the participating contestants except for one who will go into nominations.

In the first round, Team of 7 wins, and Tina argues that she wants to go first.

However, Shalin becomes the gatekeeper in the end and he nominates Sumbul for elimination.

In the second round, Archana goes from the team of 4 and she chooses Shiv who gets nominated for elimination.

In the third round, Priyanka removes Sajid from the task and nominates him.

In the fourth round, Soundarya stops Shalin from entering the bunker and leads him into nomination for elimination.

For the fifth round, the arrow comes in the middle but Nimrit says that it is Team 7 and Shiv becomes the gatekeeper.

Shiv keeps on calling Tina a Dearie and wishes her a happy birthday while she tells him that she is not comfortable with him addressing her as a Dearie.

In the end, Shiv removes Priyanka from the task and keeps her in the nomination for elimination.

The contestants start thinking that the task is over and argue among themselves while Bigg Boss reveals that it is not the end and tells Nimrit to dial the luck wheel again.

For the last round, Ankit stops Tina and puts her in nomination.

Afterward, all the contestants get ready for their nightly routine while Archana pesters Tina saying that the housemates would have liked it if she should have taken the cake.

Later, Tina gives cake to everyone and tells them to enjoy it while she goes to her room and cries.

Shalin goes to her room to comfort her while she says that she is hurt by how Shiv made fun of her birthday during the task and sobs.

© Copyright tellybest.com, 2022, 2023. All Rights Reserved. Unauthorized use and/or duplication of any material from tellybest.com without written permission is strictly prohibited.
Cached Saved on: Wednesday 25th of January 2023 10:18:05 AMCached Disp on: Thursday 2nd of February 2023 07:25:04 PM