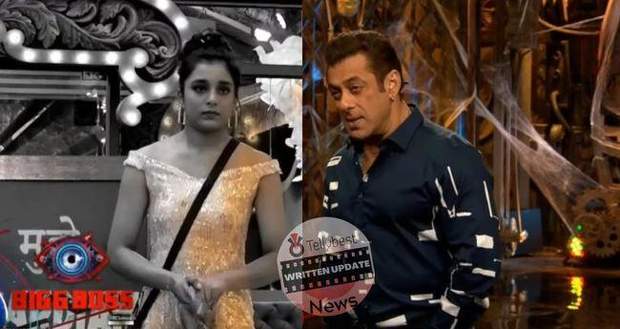 Today's Bigg Boss 16 28th October 2022 episode (day 28) starts with Salman Khan greeting the contestants in his unique way and telling the audience that a lot of things happened inside the house while he was in the hospital.

Inside the BB16 House, Shalin Bhanot apologizes to Tina Datta while she tells him that she doesn't need chocolates from him but wanted to have his support.

Tina further bitches about Soundarya Sharma getting paid followers on her account and then bragging about her genuine fans online.

Meanwhile, Archana Gautam starts arguing with Sajid Khan for eating her croissant that was sent from outside and acts like the victim.

However, Sajid says that he ate Abdu Rozik's croissant but it is revealed that Sajid and Abdu had a miscommunication.

Sajid in turn requests Shiv Thakare who gives Archana his croissant to end the argument.

Later, all the housemates sit in the living room and take the names of two contestants who they think need guidance inside the House.

Most of the contestants take Sumbul Touqueer and Ankit Gupta's names.

Many contestants also take Abdu's name while justifying their actions by bringing in the topic of the language barrier.

Salman greets the housemates and directly starts talking to Gori Nagori about her behavior the past week.

Salman further tells the contestants to get inspiration from Abdu since he is the only true contestant who is the same from the day he entered the show.

Afterward, Salman talks to the contestants and berates them for voting for Abdu saying that he needs guidance and for putting him in elimination.

Abdu thanks Salman while Salman tells the contestants how nicely Abdu expressed himself when he was upset with Sajid's decision to nominate Nimrit Kaur Ahluwalia.

Salman goes on to say that Ankit and Sumbul are fit for the title they are given and taunts Sumbul saying that she has no relevance in the house.

Sumbul falls from her cloud nine!

Sumbul looks down feeling guilty while Salman tells her that no one cares about whom she befriends and whom she loves.

Salman states that Sumbul is putting all of the blame on Shalin and tells her that she's become an example of cowardice.

A lady roams the stage while dancing while Salman says this is exactly how Sumbul is being shown to the audience.

Salman also makes Sumbul go back to the bedroom area and asks her if she wants to be seen there for the whole entirety of the episode.

Moving on to the other topic, Salman berates Ankit for being hidden in his shell and scolds Priyanka Choudhary for always talking for Ankit and protecting him.

Ankit gets mocked as Salman asks him which show he is in and asks him if he sees himself in the finale or not.

Salman talks about all the times when Ankit had a chance to put his input but he stayed silent and did not even take a stand for Priyanka whom he considers his best friend.

Reminding Ankit that he is working for the show, Salman tells Ankit to put in hard work for the job he has been given.

Salman asks Ankit if he even wants to stay in the game after which he turns to Gautam Vig and asks him why he felt bad because of Nimrit supporting Shiv.

Gautam and Soundarya get confronted by Salman as he asks them if their relationship is real or fake.

Salman goes to scold Soundarya for speaking in English.

Afterward, Salman asks the constants to sit in the Thappad Chair one by one and asks the remaining contestants questions in yes or no.

Archana goes inside and it is revealed that she is the one spreading rumors about Gautam hitting on her while Sajid goes after her and is accused of playing safe.

Shalin goes afterward and many secrets about Sumbul talking about him behind his back are revealed.

As for the elimination, Salman Khan tells the housemates that he will reveal the results to them the next day and bids them goodbye.

Inside the house, Sajid says that he does not need to indulge in all the drama happening in the house while Sumbul talks to Shalin as if she didn't get scolded for the same thing by Salman a while back.

Meanwhile, Sajid talks to Abdu and tells him that his intention is not to influence him or use him but he is guiding him because he loves him as a person because of his pure heart.