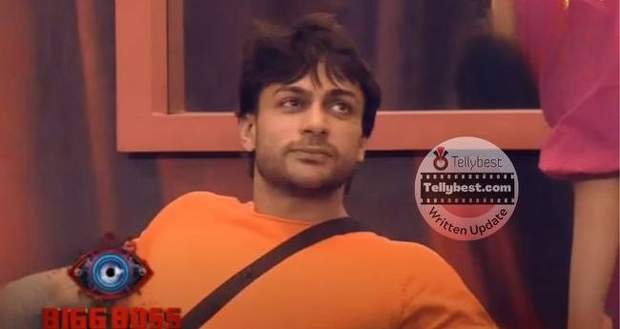 Sajid calms her saying that her parent's blessings will not let anything happen to her and will save her.

Just then, the sirens are heard and all the housemates gather in the garden to sing the BB Anthem.

Archana gets her FOOTAGE!

Further, Shiv Thakare tells Archana that she has to help MC Stan clean the powder room.

However, Stan refuses, saying that he does not want to bicker with Archana, and even then the powder room has to be cleaned only once every three days.

Meanwhile, Archana starts shouting at the housemates telling them that she will also clean the powder room only once every three days.

Archana also continues to lengthen the argument by picking on Sreejita again who is talking to Sajid.

Later, Sajid tells his friend group that Archana became the hero of the episode while Sumbul Touqeer comes there and sits with them.

Sajid starts making fun of her for talking to other members like Priyanka Chahar Choudary and Shalin Bhanot.

Sumbul later talks to Shiv about it and he tells her that she should speak up.

Afterward, Vikkas Manaktala asks Shalin about taking food from the room while he is busy playing with Maahim and tells him that he will come and give himself some time.

However, he forgets after some time and blames Vikas when Tina asks him for the ration.

Further, Shalin complains about Vikkas's rude attitude towards other housemates and goes to the kitchen to taunt him.

Later, Shiv talks to Maahim and praises himself while Sumbul sees the interaction and laughs.

Bigg Boss calls all the housemates in the living room and informs them about the new task which will revolve around Newspapers and headlines.

In the task, the safe contestants' Shiv, Abdu Rozik, Stan, Sajid, and Archana will be the editors of the BB News and will sit in the BB office.

Meanwhile, the reporters (unsafe contestants) Sreejita De, Vikas, Soundarya, Sumbul, Tina, Nimrit Kaur Ahluwalia, Priyanka, and Shalin will go to the editors and will give them news about others.

In each round, two editors will publish headlines with two names.

The task will consist of three rounds and Captain Shiv will come in the last round.

In the last round, the one contestant whose name will not be in the headlines will become safe from elimination.

At the end of the first round, Archana writes a headline on Nimrit.

However, MC Stan takes Vikas's name first and then writes Sreejita's headline which is about Vikas.

Bigg Boss announces that Nimrit and Vikas are still nominated for elimination since their names are in the headlines as round two starts.

Sajid and Abdu become the editors next while Shiv and Nimrit request to eliminate a certain person.

Further, Shalin and Sreejita's headlines are written in the newspaper while Nimrit and others get worried for Sumbul.

Nimrit goes to Sajid and tells him that Sumbul might get eliminated by higher votes.

However, Sajid tells them that only the editor has the decision on whom to write the headline about.

The task starts and Tina starts going around trying to convince others to give headlines on Sumbul.

In the end, Shiv writes headlines on Priyanka, Tina, and Soundarya.

Bigg Boss announces that Sumbul is saved from elimination while the remaining seven are still in the nominations for elimination.

Later, Nirmit reveals to Sreejita that Shalin was going to give the news that she has started doing addictions.

Meanwhile, Sumbul comes and fights with Shalin telling him that he has no right to tell if she is wrong or weak.

Shalin tells her to leave and not cry while Sumbul says that he cannot make her cry.

At the same time, Bigg Boss calls Priyanka and Nimrit into the house and asks them if they know Shalin was trying to save Sumbul.

Priyanka gets shocked to hear this while Nimrit reveals to her that Shalin was trying to make Sajid captain so that Sumbul can be saved.

Nimrit also reveals to Priyanka how Shalin and Sumbul are talking to each other when no one is looking.

Later, Nimrit, Shiv, Sajid, and Stan sit Sumbul down and reveal to her how cheaply Shalin talks about her.

Shiv asks how they can talk about such things while Sajid reveals that even the Golden boys were the same.

Shiv feels disgusted and says that he would have thrashed them.

At the same time, Sreejita tells Shalin that she wants to separate Shiv and Nimrit from the mandali.

At night, Archana gets a nightmare about her family members not being well and cries while Vikkas and Nimrit try to calm her.

However, Priyanka and others make fun of her thinking that she is doing drama.

© Copyright tellybest.com, 2022, 2023. All Rights Reserved. Unauthorized use and/or duplication of any material from tellybest.com without written permission is strictly prohibited.
Cached Saved on: Wednesday 25th of January 2023 09:57:06 AMCached Disp on: Wednesday 1st of February 2023 07:00:31 PM