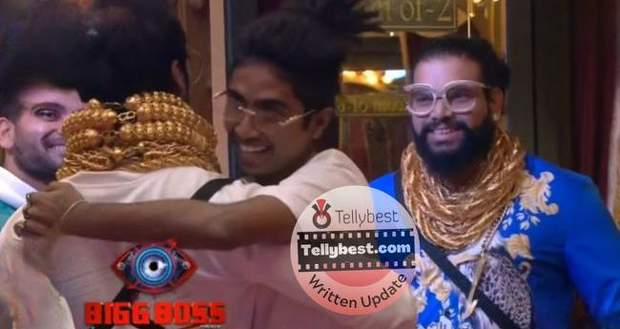 Today's Bigg Boss 16 29th November 2022 episode (day 60) starts with all the Nimrit Kaur Ahluwalia deciding who will be living in which room and giving her decision.

Further, Shiv Thakare and MC Stan will be in the room of four while the rest will go in room of six.

Ankit Gupta feels Priyanka Chahar is not enjoying the show

Later, Ankit Gupta talks with Soundarya Sharma and tells her how much Priyanka Choudary is serious about the show and how she is failing to enjoy the show.

Soundarya tells him that she thinks it is just cause she does not want to look wrong in front of national television.

Further, Archana Gautam, Soundarya, and Priyanka joke with each other while Ankit sits and hears their conversation with half interest.

Meanwhile, Sajid, Shiv, and others tease Abdu when he offers water to Nimrit by telling him that he is not Nimrit's assistant and that she can do things on her own.

At night, Priyanka and Archana joke about Soundarya while Soundarya is doing the same by bitching about their friendship with Nimrit.

The next day starts will all the contestants waking up and singing the BB Anthem.

Further, Archana sees Nimrit sleeping and taunts her after which she goes to all the sleeping members and mocks them.

Sajid goes to the captain's room without Nimrit's permission and Archana tells Nimrit about it saying that it is not okay.

Later, Priyanka vents to Soundarya as she feels unmotivated due to not knowing what she is doing wrong.

She also reveals to Soundarya how she is feeling like she is being wrong even if she is thinking good for the family.

At the same time, Tina talks to Stan about his experiences with fame and how he felt knowing that he was famous.

Shalin does drama about some girl using his hairbrush and tells Sajid and others that it must have been Sumbul.

Sajid calls Sumbul once Shalin leaves and she clarifies that she was not the one who has used Shalin's hair brush.

Priyanka and Archana keep on strengthening their friendship with Tina by making fun of other contestants while Ankit helps Soundarya with cooking.

Archana, Tina, and Priyanka laugh as they tell Shalin to talk about the expensive rings Soundarya wears.

Soundarya marches to Archana and tells her to not talk about it while Tina and others joke that the rings must be fake.

Meanwhile, Soundarya tells Shalin that she does not want to talk about what she is wearing.

Later, Archana fights over Rotis as she argues that she does not eat the rotis made by Shiv's team which was already made last night.

This creates a situation where Soundarya is accused of being at fault which makes her angry.

Soundarya says that she does not like these cheap dramas done by Archana and refuses to eat while Shiv and Nimrit start arguing with Archana about it.

Further, Archana tells Shalin that she is sure Tina would ignore him once they exit the Bigg Boss house, and everyone laughs including Shiv.

Later, Bigg Boss holds a meeting in the living room and shows them a mountain of gold which is equivalent to the 25 lakhs of prize money that was removed from the total prize money of 50 lakhs.

Bigg Boss tells the housemates that Golden Guys: Sunny and Bunty will be living with them for the duration of the task.

To open the locker, the housemates will have to find the 7 digits of the access code which are hidden in the golden items inside the house only.

However, the housemates will be able to look for clues only when the buzzer sound comes and tells Nimrit to not use her brain too much.

Further, both Sunny and Sanjay enter the BB House and MC Stan jumps to hug them as they are friends while Shalin and Priyanka give information to the unknown housemates.

Shalin teases Tina saying that Bunty is her type and shouts for him while Tina tells him that it is being too much.

Further, Shalin shouts at the camera telling all the guys to not even look at Tina since he is doing the hard work of taking care of her.

Tina smiles as she gives a small kiss on Shalin's cheek and goes back inside the house.

Priyanka teases Shalin seeing his cheeks blushing while he denies it.

Meanwhile, Bigg Boss announces that he will reveal the first digit of the passcode if Sajid makes dinner for him. Archana is made his mentor while ShaLina fights with each other in the bathroom.

Sajid makes paranthas and English eggs for BB16 while Shalin tells Tina that he doesn't have any feelings for her.

Tina states that she will stay away from him and goes to cry in the bathroom.

Meanwhile, Sajid goes into the confession room with the meal he cooked and Bigg Boss makes Sunny & Sanjay (Golden Boys) taste it.

The golden guys like it and Bigg Boss reveals the first digit of the passcode.

Shalin has no feelings for Tina

Later, Nimrit scolds Archana for leaving her nail polish in the garden and asks her to clean the entire kitchen after cooking as she is in the cooking team with Soundarya, & Sumbul.

Archana asks Nimrit not to talk while looking at her as if she is the culprit while Shiv backs up Nimrit.

Meanwhile, Shalin has a conversation with Priyanka and says Tina has hurt him over & over again.

He asks her if Ankit is also rude but Priyanka says her emotions are not over him for 2 years.

Sunny jokingly tells Shalin that he is famous outside for 2 things; chicken & running after Tina.

He takes Sunny's comment to the heart and has a conversation with Tina outside.

Bigg Boss reprimands him for using English again but Shalin schools Bigg Boss back, stating English is the only way he can emote himself better.

At the end, Tina says she is not the right kind of girl for him and Shalin dismisses her.