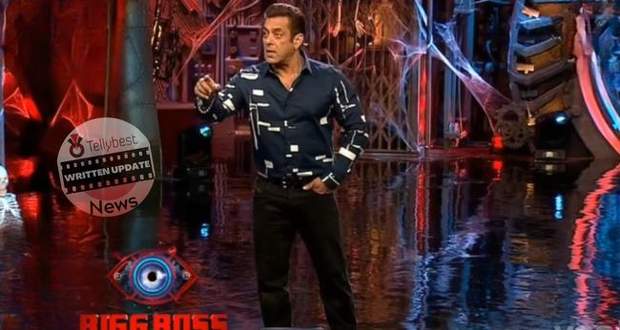 Salman Khan humorously greets Ishan & Siddhant who are sleeping on his bed.

Later, Salman Khan greets the BB16 contestants on Shanivaar Ka Vaar and asks Abdu Rozik to take the names of the contestants as he reads out some specific titles.

It is a horror special and Salman Khan asks Abdu who is the one contestant inside the house with less brain.

Abdu takes Ankit Gupta’s name and puts a skeleton garland around him.

Salman then asks who is the one with bad behavior in the house and Abdu calls Sumbul Touqeer.

Abdu’s reasoning is Sumbul appears good in front of him but nominated him yesterday.

Shalin Bhanot gets the title of not having a nice heart while Tina gets called out for being boring.

Salman Khan asks Abdu who is the liar of the house and he takes Priyanka Chaudhary’s name, stating he is not a baby and is capable of understanding her politics.

Salman Khan then asks Nimrit Kaur Ahluwalia if she is willing to shift all the ration of her room to sleep beside Shiv Thakare.

Nimrit declines the offer and Salman Khan then asks Gautam Vig if he is willing to give up the Bigg Boss 16 ration to be the next captain.

Gautam Vig gives up ration, becomes the next captain

Gautam declines the offer but Salman asks him if he is sure. After thinking for a while, Gautam accepts the captaincy position and everyone gets shocked.

Sajid Khan gets angry the most, followed by Nimrit who asks Gautam if he has lost his mind. Priyanka Choudhary & Ankit Gupta react angrily well along with Archana Gautam who tells Gautam to feed people, not snatch their food away.

MC Stan & Shiv Thakare try to calm down an enraged Sajid who keeps cursing against Gautam.

Outside, Soundarya Sharma asks Gautam why he did this while Priyanka joins them and states what he did is wrong.

Archana sits on the kitchen floor and begs Bigg Boss 16 to forgive all of them on Gautam's behalf while Abdu shouts in the house.

Abdu screams and looks at Shiv, that Gautam sacrificed the other fourteen BB16 contestants for selfish reasons.

After listening to Soundarya's explanation, Gautam pleads to Bigg Boss to reverse his decision but BB16 stays firm.

Bigg Boss then announces that the activity area will be closed while a few men come to take all the ration from the house as BB's anthem plays in the background.

Soundarya cries and tells Guatam he did not have to do this to prove his integrity to people who won't understand it.

Salman Khan joins the contestants again via video call and asks everyone how they are feeling right now.

Everyone starts bashing Gautam but Salman Khan pointedly asks Gautam if he is going to stand by his decision.

Salman scolds everyone as there is no one strong enough to stand by Gautam's decision.

He then asks Soundarya if she agrees with his decision but Soundarya says not on the cost of leaving everyone hungry.

Salman Khan asks everyone to respect the new captain's decision as it is HIS sole decision.

However, Salman says Gautam can retain this position only if he is safe from today's elimination. Sajid & Archana get happy and cheers Karma when Salma says Gautam is eliminated.

No elimination to happen

Salman Khan calls out Shalin's bogus nature when he stands up to bid goodbye to Gautam at whom he was shouting a while ago.

Nimrit asks Salman if this is true but it is not & Gautam is safe.

Salman then asks Abdu who eliminated him since he is eliminated today. Nimrit and Gori shed tears while Salman says everyone backstabs Abdu as he is the only one playing real.

Abdu stands to leave the house but Salman tells him India is loving his game and he is SAFE.

There is no elimination happening today since Salman Khan wanted to beware all the contestants of their "safe" gameplay.

They all promote their new movie "Phone Booth" after which Salman sends Ishan & Siddhant inside the house to uplift the ruined atmosphere of the house.

Katrina Kaif joins them inside the house and gives a cluster of peacock feathers to the contestants, asking them to remove any type of ghost from their peers.

Most of them take Guatam's name except Mc Stan who calls Archana, Ankit who calls Sumbul, & Shiv who calls Shalin.

Mc Stan wants Archana's obsession with ginger to go away along with her irritating voice, while Shiv calls out Shalin for his fake friendship.

After they leave, Bigg Boss announces that no one would have to sleep empty stomach only for today since he is providing them with food.

Sajid tells Abdu not to leave any space for Gautam around the dining table, otherwise, he may lose his temper.

In the night, Tina Datta proclaims that being captain for one week will not prove Gautam's love for Soundarya while Nimrit says if it is real, it will be shown.

© Copyright tellybest.com, 2022, 2023. All Rights Reserved. Unauthorized use and/or duplication of any material from tellybest.com without written permission is strictly prohibited.
Cached Saved on: Monday 21st of November 2022 01:32:39 AMCached Disp on: Tuesday 29th of November 2022 10:33:50 AM